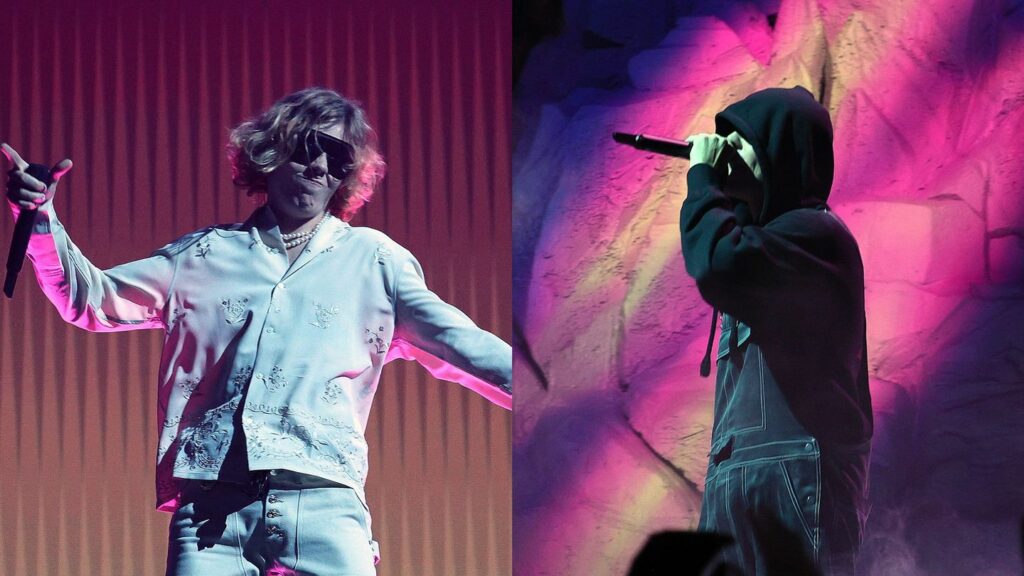 Justin Bieber and The Kid Laroi are literally on the top of the world. The two artists descended from the heavens and perched amongst the highest cliffs to perform their smash hit single “Stay” together at the 2021 MTV Video Music Awards on Sunday (September 12).

While The Kid Laroi, real name Charlton Howard, pumped up the crowd in an all-white ensemble, Bieber scaled down the rock face until he landed on the stage below. As the “Peaches” singer opened his verse, The Kid Laroi joined him on stage and the duo brought the energy in the room to a fever pitch as they jumped along to the song’s snappy beat. When the track ended, the two artists gleefully hugged one another before The Kid Laroi made his exit.

Then, as the skies darkened and smoke began to swirl around him, Bieber found himself alone onstage as the opening bars of his bittersweet pop anthem “Ghost” began to play. In his first VMAs performance since his tearful rendition in 2015, Bieber channeled the song’s message of inner longing and hope by pulling his hood down and crouching low to the ground. Relishing in the anonymity that the haze gave him, Bieber slammed his hands into the stage as he passionately sang.

As he uttered the song’s final chorus, Bieber deftly scaled to the top of the mountain and stood poised like a royal surveying his kingdom. Then, he raised his hand to the sky and lowered his head, looking both humbled and healed by the cathartic performance.