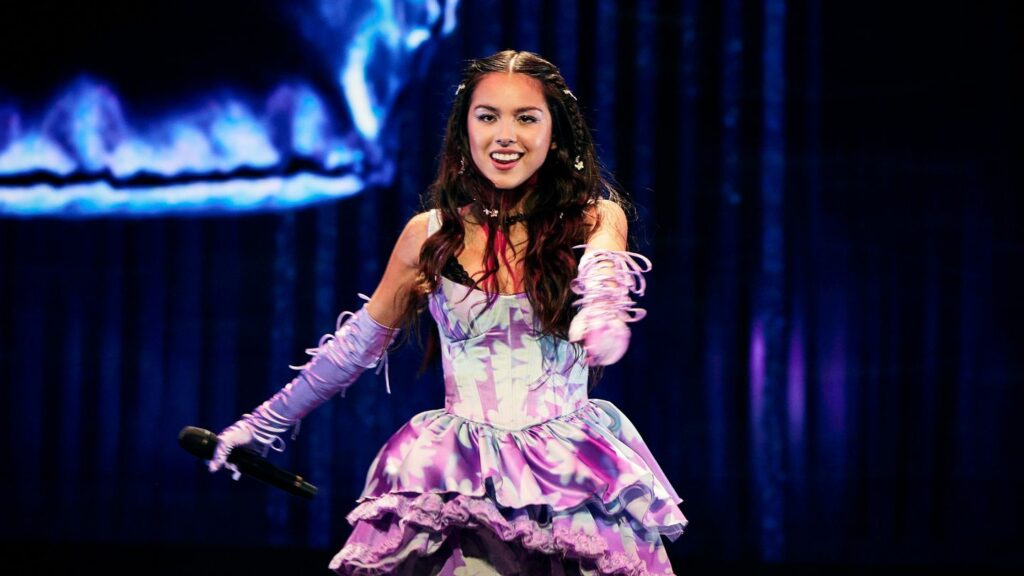 Olivia Rodrigo brought her Sour prom concert film to life at the 2021 VMAs on Sunday night (September 12), descending into Brooklyn’s Barclays Center riding an iridescent cloud as poofy as her dress. Her fellow partygoers, dapper in retro suits and flouncy dresses, waited below atop purple tables littered with party cups, as the telltale first notes of “Good 4 U” rang out.

When the five-time VMA nominee (and brand-new winner) touched down, she lent her “spicy Pisces” energy to the party, leading her crew into an enviable rager matching the heartbroken angst of the fan-favorite single. Welcome to Olivia’s pop-punk prom, where moshing and wild dancing are encouraged, along with a healthy splash of sparkles.

It’s been a massively successful year for the Best New Artist nominee, who’s also up for Artist of the Year, Best Pop for “Good 4 U,” and Song of the Year and Push Performance of the Year for her record-breaking “Drivers License.” Sour, a masterful coming-of-age story released last May via Geffen Records, showcases her talent and versatility as a songwriter. Fans could turn up the volume and scream-cry to the angry choruses of “Good 4 U” and “Brutal,” sit in their feelings for “Happier” and “Favorite Crime,” then experience the bittersweet wistfulness of “Hope Ur Ok.” As she told MTV News earlier this year, the LP reflects a time of her life when “everything that I had that was, like, really awesome and good in my life went really sour.”

Her show-stopping VMA performance reflected these emotions — a wonderfully human, tangled mess of anger mixed with sadness mixed with confidence, especially during the climactic “like a damn sociopath” lyric in the bridge. Then confetti rained over the Barclays crowd, and the excitement was just too much for the poor camera to handle. The performance ended with a resounding smash, but VMA night is far from over.