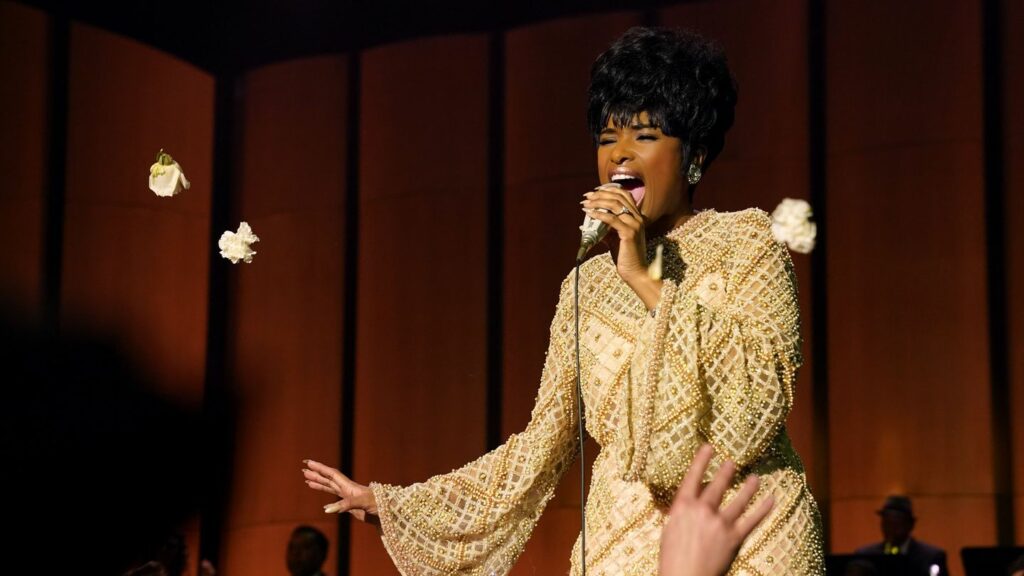 The aching notes rumbling with hurt, the nasal cries demanding attention and autonomy — Aretha Franklin’s music is ubiquitous, with instantly recognizable hits like “(You Make Me Feel Like) A Natural Woman” and “Chain of Fools,” as is her lasting legacy of racial advocacy. But perhaps lesser known today is how the singer with one of the greatest voices in the world struggled for years to truly hone it. That’s the story told in the biopic Respect, out Friday (August 20), which centers the formative first three decades of Franklin’s life and career. “Her childhood through her twenties, to basically when she turned 30, felt like a powerful period,” director Liesl Tommy tells MTV News over Zoom. “I thought a lot about what the phrase ‘Queen of Soul’ means. What does ‘soul’ mean in this context? How do you become the queen of soul?”

To answer that question, Tommy, a South Africa-born director making her feature-film debut, looked to the church. That’s where Franklin, the daughter of a Baptist minister, first began singing publicly. It’s also where she would return in 1972 to record Amazing Grace, a live gospel album with choral backing that earned her a Grammy and became the bestselling disc of Franklin’s decades-long career. This provides the bookends for Respect, between which are the circumstances that imbued her sound with its decadent layers: her pregnancy at 12 years old, the domestic abuse she survived and overcame, but also her involvement in the civil rights movement and, later, her triumphant Madison Square Garden premier. “She had this intensity of storytelling that she sang with,” Tommy describes. “It really captured my imagination.”

If you’re Jennifer Hudson, who stars, you might find the answer on stage. The role was made for the actress — literally, in the sense that Franklin personally chose her for the part after her Academy Award-winning performance in 2006’s Dreamgirls. But Hudson, who sang “Amazing Grace” at Franklin’s funeral in 2018, brings her own soulful virtuosity to the performance, and much of the singing that can be heard in the film was delivered live on set. “You understand why Aretha Franklin chose her, because she has a vocal gift that is God-given, the way that Aretha’s was,” Tommy says. “It was kind of astounding to watch it happen, and it put a spell on everybody all the time.” Ahead of the premiere of Respect, director Tommy unpacks what can be gleaned from revisiting Franklin’s story in full context.

MTV News: Growing up in South Africa and later moving to the United States, what was your relationship with Aretha Franklin as an icon, as a musician?

Liesl Tommy: I come from a culture and a family that listened to music all the time. I don’t really know of a time when I didn’t know about Aretha Franklin’s music. As soon as I was conscious, I heard it playing. And I became obsessed with her at a very, very young age. I loved her and Nina Simone and Billie Holiday, and strangely, even in South Africa, Patsy Cline. I used to love to dress up and choreograph numbers for my cousins when I was a little girl, and she was just somebody who always felt like it needed to be a solo. She required one person singing their face off. And as I was thinking about what this film should be, I wanted to tell a story about how you become a woman who sings with such emotional intensity.

MTV News: Why did you decide to take this project on? And why now?

Tommy: I came originally from the theater, and I feel very connected to stories with music. Also, it’s Aretha Franklin, and I just felt like I would die to portray her legacy on screen. And then also, part of what I’m interested in doing as a filmmaker is creating space for women and women of color, and basically, marginalized people who do not see themselves in major motion pictures. So normally, a movie like this would be written and directed by, probably two white guys. Most major biopics, it’s the territory of, frankly, the white male, and I just feel like it’s time for a different perspective and a different gaze.

MTV News: How do you feel your gaze, as a woman of color, changed how this story was told? 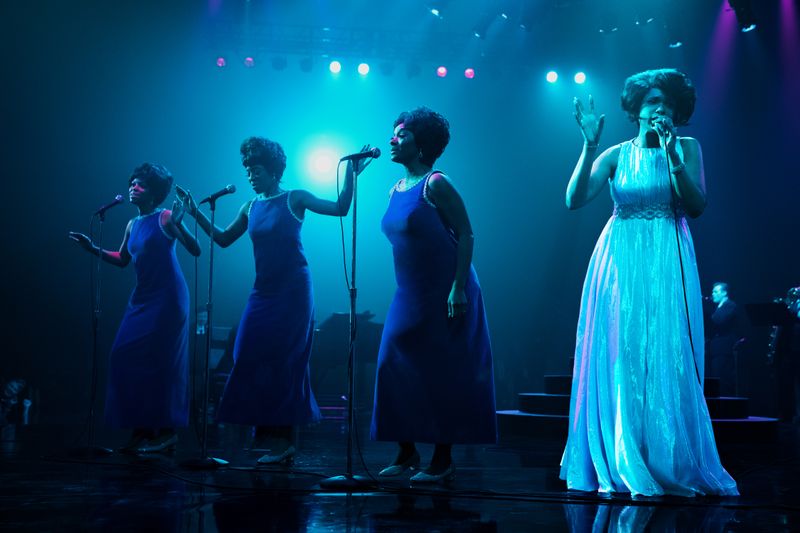 MTV News: Is there any particular approach in the filmography and how you shoot the violence?

Tommy: The cinematographer and I talked about it at length. In terms of the scenes with her husband, I never wanted to show her actually getting punched or hit or anything like that. That was really important to me. And so we spent time structuring scenes to understand the threat of violence without having to actually see a hand land on her face.

MTV News: How much of what’s in the movie is new sound design, how much is taken from Aretha’s own recordings, and how much of it is Jennifer Hudson?

Tommy: I wanted every single person who had to sing in this film to be able to sing live on screen, on set. The majority of the music that you hear in the film is music that was recorded live on set. Everybody sang, and Jennifer sang every single song, every single day on set.

And then there were other people on set who had to sing, the women who played the backup singers, the woman who played her mother, Audra McDonald, Heather Headley. These are all Tony-winning, Tony-nominated actresses and singers. Tituss Burgess, everybody who had to sing is at the top of their game vocally. And I just think it brought power and an intensity to the musical performances the way that maybe lip-syncing or something that was done in a studio wouldn’t. Coming from a musical theater background, I know the power of live performances of songs.

MTV News: I loved all the scenes when she’s riffing in the Alabama studios. it’s so different from her stuffy Columbia Records experience with a full orchestra.

Tommy: I know, right? It’s so crazy — people in suits and ties in the studio, making music. And then you go down to Muscle Shoals, Alabama, where you can smell everybody. It’s a whole other vibe.

MTV News: There’s this lovely scene in the film where Aretha is developing her take on “Respect” with her sisters. They’re all sitting at the piano in her apartment in Harlem, and then it suddenly cuts to Madison Square Garden where she’s performing in full glamour, looking amazing, singing “sock it to me, sock it to me.” Why did you choose to frame the film around that song?

Tommy: Well, that song, obviously, is one of her biggest hits. But also, I think it’s a beautiful representation of her journey. This movie is about a woman with the greatest voice in the world who is struggling to find her voice. Part of that is to be a woman, and for her, a woman of that particular time period. She had to go on a journey as a woman of the ’50s and ’60s to find her personal power, and to have respect for herself, and then to ultimately demand respect. There’s a reason why she loved that song, and why she wanted to sing that song. It was true to her story. 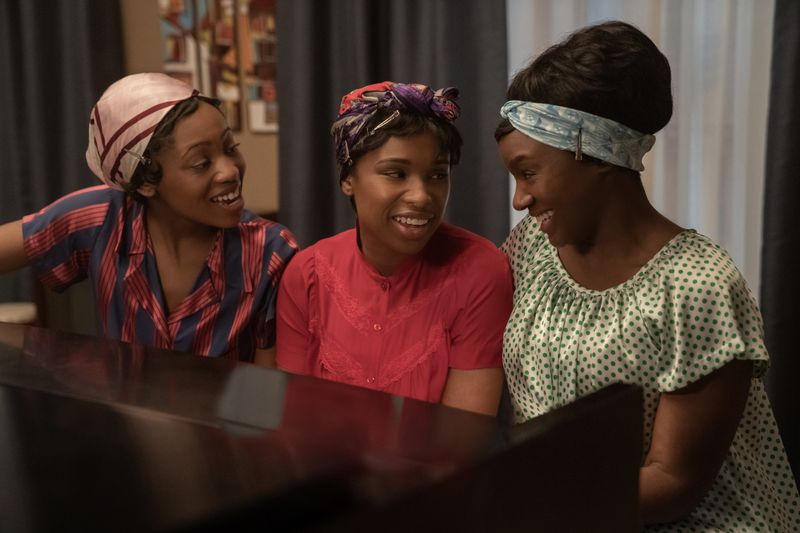 MTV News: Probably a lot of folks don’t know that “Respect” was originally an Otis Redding song. While doing research for this project, was there anything you discovered about Aretha that surprised you?

Tommy: The fact that she had children at a young age isn’t something I knew in advance of working on the film. I thought that was pretty powerful, a young girl who was just trying to figure out who she was as a person. But also the depth of her civil rights work, which started as a little girl going on tour with her father, and then later going on tour with Martin Luther King Jr. That was so powerful and clearly formative because she stayed political her whole life.

MTV News: Some of the scenes are shot as if they were archival footage. At Martin Luther King Jr.’s funeral, for example, it looks like it’s being shot through a newscast. What was the thinking behind that technique?

Tommy: Artistically, I was fascinated by what it was like to live under that particular microscope. Even when she is breaking apart with grief at the funeral, there were cameras on her the entire time. I wanted to show that part of being a superstar is that your life is being recorded. You’re exposed.

MTV News: Do you have a favorite scene?

Tommy: I think the scene that I love the most in the movie is the recording of “Ain’t No Way,” because her sister Carolyn wrote it for her. And not a lot of people know this, but it is a secret gay anthem. Carolyn was a lesbian. There are so many levels of storytelling happening in that scene, because there’s the relationship between her and her sisters, where she’s basically making her sister’s dream come true by recording her song. That’s also one of my favorite songs, and I like that there’s a little secret in there for people who will get it.

MTV News: What about Aretha’s story felt previously untold before this film?

Tommy: What I thought was amazing was that she had four or five albums into her early pop career that were not popular. She had a journey like millions of other musicians, where she was working her face off making albums, sometimes two in a year. I think it’s inspiring for all of us to know that everybody has to go on a journey, everybody has to experience failure.