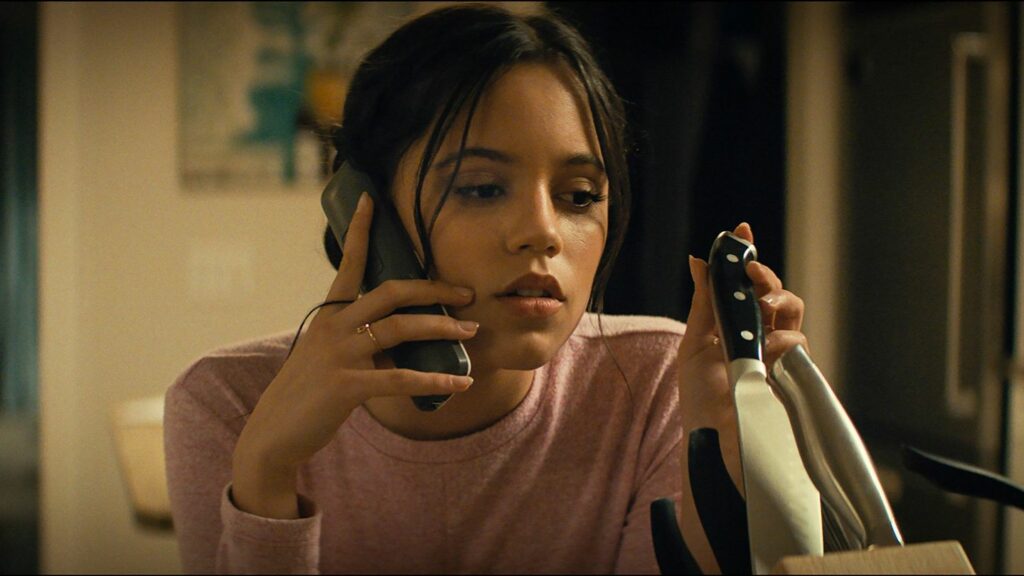 The quintessential horror franchise Scream is back after 11 years of silence and 25 years since the conception of director Wes Craven and writer Kevin Williamson’s incomparable terrors. The fifth entry of the film series, released on January 14, enlists the extraordinary trio of legacy characters that fans have come to love: Neve Campbell’s Sidney, Courteney Cox’s Gale, and David Arquette’s Dewey. But this re-envisioned Scream simultaneously opens the door for a whole new crop of Woodsboro’s suspects. By taking on a new challenge in a genre that has gone through unprecedented change, Scream presents perfect symmetry of multiple generational cinematic desires, successfully keeping the movies’ blood pumping.

One of these new characters is played by the versatile rising star Jenna Ortega (You, Babysitter: Killer Queen), who prior to the release of the film, finds herself humbled by the early buzz surrounding her emotionally charged performance as Tara Carpenter, in addition to the project’s positive reception. “Oh, it’s been insane for sure!” Ortega shares with MTV News over Zoom, days before the theatrical relaunch of the grisly title.

The franchise isn’t new to carving out admiration from critics and viewers, as the 1996 original film, the brainchild of Craven and Williamson, was labeled a vital rebirth for the genre. What particularly sets this new film apart from its four predecessors is that there has once again been a directional genre shift. The return to Scream sharply acknowledges the current popularity of so-called “elevated horror,” like that of Hereditary and Get Out, before going full-throttle into its classic slasher roots with new levels of meta dialogue and visceral brutality.

“To do something like this, over 10 years after the last installment, it’s important to keep people interested and keep things new and fresh,” Ortega explains. “So yes, ‘pay your respects, pay homage, it’s necessary! But how is this going to be different from the rest?’ And I tried to keep that in mind during filming.”

In the movie, Ortega’s Tara is the younger sister of Melissa Barrera’s Sam Carpenter, someone with significant secrets that inadvertently places others, including Tara, in great danger. Ortega goes through some of the most ambitious and shocking moments of the new film, giving her firsthand knowledge of how the modern iteration of the killer Ghostface is depicted. “I hope people take away the intensity of Ghostface this time around. He’s a lot more aggressive and he’s very intimidating,” she says. “It gets graphic in a way that Scream hasn’t seen before, and it gets gory, which makes this killer stand out and shift into a bigger and better horror from the brutality to the score.”

Though Scream has a long-standing following that formed in the ’90s, it has since charmed Gen Z viewers, a trend apparent on YouTube and TikTok. Apart from general ’90s fascination and nostalgia, what is it about Scream that appeals to a new audience? “I think the incredible thing about Scream is that it’s always relevant and it’s always speaking to a new generation, and what’s happening in the world.” Ortega says. “It’s really self-aware, and I think that’s a special quality to this franchise because of that spontaneity with the films, especially that whodunit aspect. It’s kind of like a game for the audience, and I think that leads to a really fun experience.”

Its bone-chilling original opening sequence, shocking killer reveals, and the debut of timeless scream queen Sidney Prescott have made Scream a classic, and have helped it develop and maintain a fresh audience with each new generation. “The crazy thing about Scream is that it always goes back to the original,” Ortega says with a laugh. “So for the returning audience, it’s nostalgic, which is something we crave. … But for newer audiences, we kind of sum up Woodsboro in a way that even if this is the first time you’ve seen a Scream film, you are told enough information to understand the story, and I think that’s a great way to allow for a wider audience.”

“It’s kind of the same thing: naive teens not understanding the severity,” she continues. “I think with anything traumatic, people don’t understand the weight or gravity until it happens to them. For some characters, that history of Woodsboro means more than others, and for others, it’s like a folk tale or something.”

Just like her character, Ortega wasn’t even born when the original film was released. In fact, Ortega, who is 19, finally watched it just six years ago, despite knowing the instantly recognizable Ghostface mask for much longer. “I think my first memory of Scream was my older brother dressing as Ghostface for Halloween when I was maybe 6 or 7,” she recalls. “I knew that it was such a common costume and that Scream was pretty iconic, but that was probably my first exposure. I didn’t watch the film until I was 14, but I knew of the characters like Casey Becker and Stu Macher.” Knowing those characters, and knowing how beloved they are, can provide challenges when stepping into the franchise’s latest chapter. “It adds a lot of pressure,” she says. “Not only was every prior character played to perfection, as well as the perfect scripts, but also understanding that Scream is a very well-loved franchise and its peoples’ babies. It’s my baby! I have so much love for it.” Speaking on behalf of the film’s outstanding blend of talent, including other newcomers Jasmin Savoy Brown, Mason Gooding, and Barrera, Ortega reiterates, “We just want to do the franchise justice, so just getting to insert yourself in Woodsboro and put your foot in the door, it brought a certain level of passion.”

As her time in Woodsboro comes to an end, Ortega has cemented herself as a next-gen scream queen for her pivotal role in the evolution of an electric franchise. Even with so many gifted individuals bringing something unique to the table, a project like Scream requires the collective energy of all involved to succeed. “Something I learned is the importance of chemistry. The entire cast got along so well that when it came to actually working together, things flowed really naturally,” she says. “Then seeing the original cast work was a great learning experience to watch them just flip into these characters they’ve played for 25 years just like that.”

“But also, when Ghostface is in front of you, there’s an added pressure that you don’t get at every job,” she concludes. “When you feel that pressure, I kind of want to take that everywhere I go because I kind of love that.”