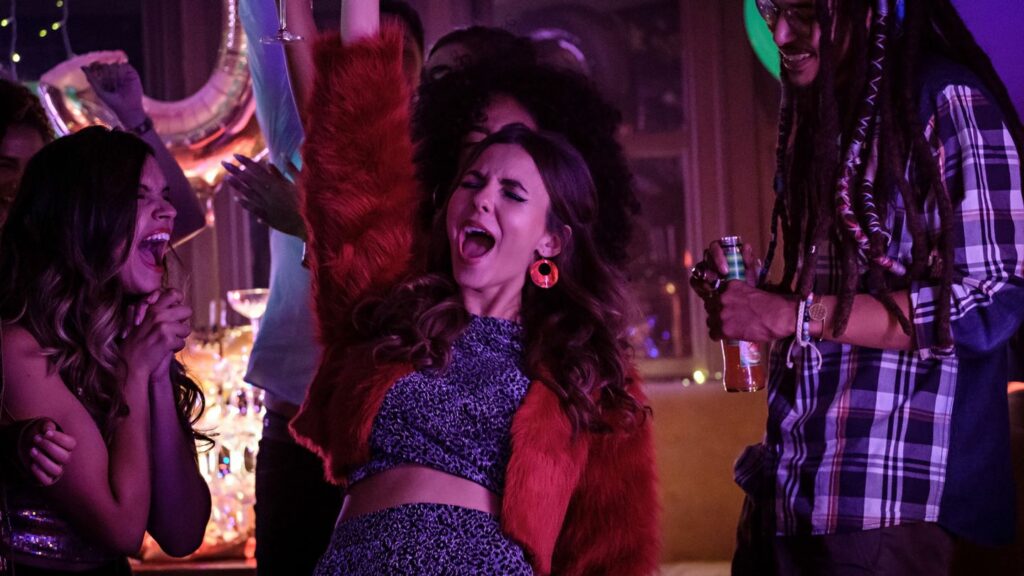 Victoria Justice began manifesting her own television show at 8 years old. With a budding modeling career that allowed her to test her acting chops in commercials in her home state of Florida, the young Justice knew she had the drive and gumption to achieve her dream: becoming a leading lady. Looking back, it’s a goal that the actress, now 28, credits heavily to her childhood love of early aughts woman-led teen sitcoms like Lizzie McGuire and That’s So Raven, as well as a formative memory of watching Funny Girl in the back of her mom’s minivan. Inspired, Justice would lie in bed each night, close her eyes, and imagine a world in which she was the star.

“I grew up watching those shows, and those women really inspired me,” Justice tells MTV News over Zoom. The actress is currently on day eight of quarantine in Sydney, Australia, for a new film that’s strictly confidential. “I remember watching them and thinking, Oh my gosh, wow, how lucky are they to be able to do that. They’re so talented. They’re so cool. I want to be like them one day.’”

Her witching-hour wishes came true in 2010 when, after spotlight performances on Zoey 101 and iCarly, Justice stepped into the lead role of Tori Vega on Nickelodeon’s Victorious. The show, which ran for four seasons, centered on Tori and her group of friends as they sang, danced, and freaked the freak out in various comical situations at Hollywood Arts High School. The role propelled Justice into a new echelon of fame, but also into the hearts and minds of kids around the world. “The fact that I actually ended up getting my own show on Nickelodeon, which is kind of like winning the lottery, is the most insane thing ever,” Justice reveals. “I genuinely feel like I did manifest it.”

Since the show ended in 2013, the actress has continued to blend her love of music and acting, juggling multiple leading roles as Lindy in MTV’s thriller series Eye Candy, Naomi in the Netflix rom-com Naomi & Ely’s No Kiss List, and showcasing her impressive vocal range as Janet Weiss in Fox’s rendition of The Rocky Horror Picture Show. Now, she’s dying (literally) to reintroduce herself to the world as Cassie Garcia in the new Netflix film Afterlife of the Party released on Thursday (September 2).

Directed by Stephen Herek, the dark comedy centers around boisterous party planner Cassie (Justice) who dies in a freak accident on the week of her 25th birthday. After waking up in “the In-Between,” she encounters her guardian angel Val (Robyn Scott) who informs Cassie she must return to Earth and make amends with three important people in her life: her yoga influencer dad Howie (Adam Garcia), career-driven best friend Lisa (Midori Francis), and absent mother Sofia (Gloria Garcia). If Cassie can successfully remedy these relationships, she’ll ascend to the Above; if she fails, then she’ll plummet down Below.

It was the character’s unique redemption arc that initially intrigued Justice. “[Cassie] starts off as this social butterfly that’s somewhat self-involved and really isn’t as appreciative of the people in her life as she could be,” she says. “To then have this devastating, dramatic thing happen to her like death, it really opens her eyes and helps her grow in a lot of ways.”

As Justice brought Cassie to life on screen, the character’s personality transformation from self-absorbed to self-sacrificing caused the actress to reflect on her own life and relationships. “Just playing Cassie — she’s 25 and she dies. That’s such a young age,” she says. “None of us really know how long we’re going to have here. I think [the film] just reminded me that it’s just so important to take care of the people you love and make sure they know how much you love them.”

That includes the friendships she cultivated on set, too. Due to the coronavirus pandemic, Afterlife of the Party was filmed in a bubble in South Africa. Its strict health and safety protocols saw the cast become its own family, one that Justice feels “so lucky” to have worked with. She recalls how, after complimenting Adam Garcia’s T-shirt, on which was a printed picture of an octopus, the actor gifted it to Justice before flying home to London. And her friendship with Francis grew to become as strong as their on-screen counterparts. “I love Midori. She’s one of my friends to this day. I feel like we both really cared a lot about this project and about telling this story properly; we wanted to really make sure that the female friendship felt authentic,” she says. “It was really cool to kind of establish this real-life friendship as we were creating the movie friendship.”

Cassie’s mission at the crux of the film requires her to repair a relationship she has no interest in fixing: the one she has with her mother. It’s complex and convoluted, marked by Sofia’s decision to leave when Cassie was a child, but Cassie’s residual feelings of bitterness and betrayal keep her from moving on. “I think it’s really interesting that, in the afterlife, Cassie had to go back to Earth to reconcile that she was carrying this grudge. It’s an interesting perspective to think that, man, it’s better to not leave this planet holding on to anger,” Justice remarks. “I think it’s important to forgive people because, at the end of the day, nobody’s perfect and people make mistakes. Sometimes, you have to be able to be willing to hear the other person out and give them a second chance.”

The scenes opposite Gloria Garcia exploring their mother-daughter bond were “a little challenging” because they were so poignant and such a far cry from Justice’s relationship with her own mother. In order to pull herself into that “dark headspace,” she would listen to Sia’s sorrowful single “Breathe Me” to tap into Cassie’s feelings of hurt and abandonment. “I think the relationship between mother and daughter is such a special one. And it’s so complicated in so many ways,” she reflects. “I’m very close to my mom so I couldn’t necessarily relate this situation specifically, but I really could understand where [Cassie] was coming from. It was challenging emotionally, but with the way it was written, and with how close I am to my mom, it was easy for me to put myself in her shoes.”

Despite its heavy subject matter, there’s also a lot of levity within Afterlife of the Party. Justice is unabashedly enthused as she recounts the thrill of doing her own stunts in Cassie’s death, although she confesses that she ended up with “so many bruises” the following day after pretending to crack her head on a toilet seat. She also fondly recalls a scene in which Cassie visits the set of her longtime celebrity crush, a pop star named Coop (Spencer Sutherland), as he films his new music video. It was shot at the Spier Hotel, where the entire cast stayed during filming; the green room they used for the scene was Justice’s bedroom. “It was so crazy,” she says with a laugh, “because I’m watching the scene back and I was like, that’s where I lived!”

Sutherland and Justice combined their songwriting prowess to create a feel-good, original song titled “Home” for the end of the film. It’s the latest in a string of hits from Justice, who began releasing new music after a seven-year hiatus in December 2020. After dropping the soul-searching, self-care single “Treat Myself,” she followed up the track in February with the sensual, supernatural smash “Stay” and, four months later, the atmospheric anthem “Too F*ckin’ Nice.” When it came to writing a song for Afterlife of the Party, however, Justice and Sunderland found themselves simultaneously stumped. The duo was tasked with creating a song that was a celebration of life rather than a traditional love song; in his brief, the director wanted the track to evoke a feeling of “dancing while crying.” Beautiful yet bittersweet; a perfect representation of the film. Justice says, “For us, it was really just trying to strike that balance of, OK, how do we write a song that is this life song that doesn’t feel cheesy but is also still really upbeat and makes you just feel invigorated in some way?”

There were “many versions” of the track before inspiration struck, and it was an email from their music supervisor that finally gave Justice and Sutherland the spark they needed. “Our music supervisor had mentioned the word ‘home’ at some point, like [a song] to bring us home. And I was like, wait, home could really tie everything together. It could be a song that isn’t about love, specifically, but is about a more universal kind of love,” Justice shares. “Because, by the end of the movie, Cassie really is home. She’s home within herself because she now has peace from mending these broken relationships. Also spiritually, she has come home. I felt like that word really captured all of that.”