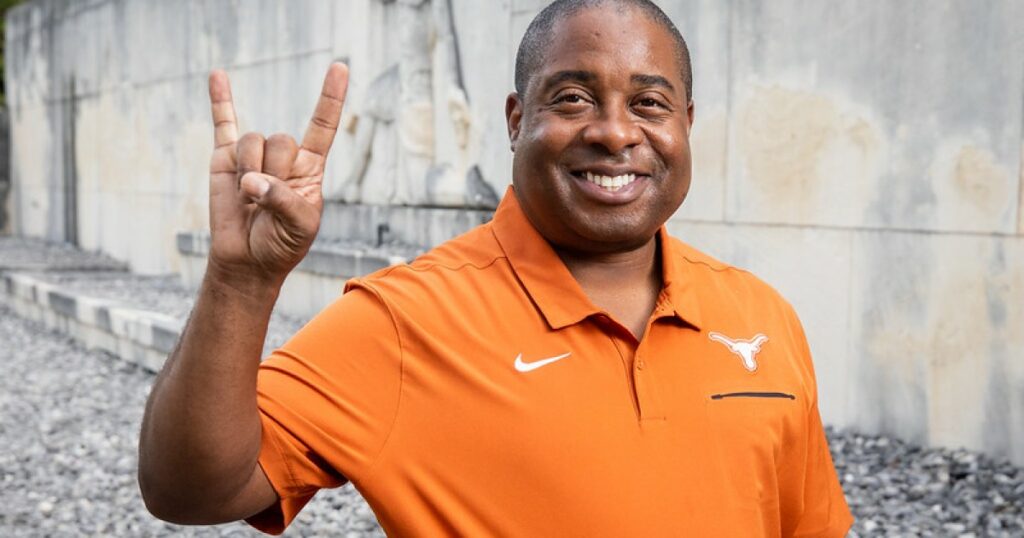 When Cliff Croomes was a student at UT Austin, he marched snare drum in the Longhorn Band. Now, 20 years later, he’s returning to the Forty Acres as the band’s director.

The Longhorn Band, also known as the “Showband of the Southwest,” performs at football games, pep rallies and other UT and community events.

Croomes said he looks forward to coming back to Texas and working with students “as we write the band’s next chapter.” He’s taking over at a time of change and controversy in the program.

Texas and the University of Oklahoma are poised to leave the Big 12 Athletic Conference and join the Southeastern Conference in the coming years. Croomes has already been through a conference change with the Longhorn Band. He was a student when UT moved from the old Southwest Conference to the Big 12. Croomes doesn’t anticipate this move will have much impact on the Longhorn Band.

“We’re always going to be Texas no matter what conference we’re affiliated with,” Croomes said. “The tradition is so strong and so rich.”

The band program within UT is also undergoing some changes. After concerns and complaints about racism in the school’s alma mater, “The Eyes of Texas,” a new plan has been developed that includes giving students the option to participate in a band that doesn’t play the song starting in fall 2022.

Croomes said he himself doesn’t have any qualms about the song. He said he associates it with the pride he could see in his “mother’s face as she got to see her first child graduate from college.” But Croomes said he wants to hear how students feel about “The Eyes of Texas” and wants to “be sensitive to all perspectives.”

Croomes said he feels some “added pressure” coming in as the Longhorn Band’s first Black director but notes “a calm sea never made a skillful sailor.”

Listen to the interview above or read the transcript below to hear more from Croomes about his plans as the 15th director of the Longhorn Band, including his desire for a more diverse repertoire.

This transcript has been edited lightly for clarity:

KUT’s Jennifer Stayton: What do you see as the next chapter for the Longhorn Band?

Cliff Croomes: I see the Longhorn Band’s next chapter as taking our brand of entertainment to the next level in terms of incorporating all of the things that the Darrell K Royal Texas-Memorial Stadium has to offer in terms of the jumbotron, crowd participation, interactive things like that, but also more diverse repertoire in the stands. So, there’s going to be something for every fan to enjoy.

When you say more diverse repertoire what do you mean?

You’re a founding board member of an organization called “…And We Were Heard” about composer diversity. Tell us a little bit more about that organization and what it does.

Basically, what it does is it pairs composers from underrepresented backgrounds with universities or public schools. So, if a school is looking for diverse repertoire and a composer from a diverse background, or they’re both looking to have this experience, we sort of match those two up.

You’re coming into the program at a time when it looks like Texas is going to change conferences. Texas and Oklahoma are headed to the Southeastern Conference. You were a student not long after Texas had changed conferences from the Southwest Conference to the Big 12. Does something like that impact how you approach the program?

My freshman year was the last year of the Southwest Conference and my sophomore year was the first year of the Big 12, and one thing I can say in a conference transition: Texas is Texas. And we’re always going to be Texas no matter what conference we’re affiliated with. The tradition is so strong and so rich, it’s just a matter of who’s going to be on the other side this week. It’s not like the other halftime offering will be any better or anything like that. It’ll just be different. The Southeastern Conference just has different traditions.

I want to talk about one of the traditions of Texas, which is “The Eyes of Texas.” There’s been a lot of discussion about that. You played it as a student and a band member. There have been concerns about some of its lyrics and that it had performance origins at a minstrel show early in the 1900s. There was a report from a UT committee released this spring that said the intent of the song was not overtly racist but the cultural milieu that produced it was. I want to get your thoughts about the song itself and where things have landed with that now that you’re overseeing the bands. There will be a program where joining this band means you do play it and joining this other one means you don’t. What do you think about all of that?

I’ve had a chance to look over some of the materials. There’s so much information out there. But mainly I’m going off of my own personal experiences with it which were all extremely positive. Some of the best moments in my college career and life had a soundtrack of “The Eyes of Texas.” When I graduated, we had graduation and my mother was in the crowd. My family was there. And when they struck up “The Eyes of Texas,” my mom had her horns up. She didn’t even really know what was going on. She just saw everybody else doing it. And they struck up the song. And I could look out and see my mom, the pride in her face as she got to see her first child graduate from college. That’s what the song means to me.

So now returning to Texas, you don’t have concerns or qualms about the song?

Do you feel any extra added pressure or responsibility with this controversy and situation with “The Eyes of Texas” as you are coming in as the first Black director of the Longhorn Band?

Yeah, there’s so much with that. I stand on the shoulders of giants. Of course, the African-American alumni of the band that came before me and African Americans in general. My grandmother was a domestic. And this would have been — in her wildest dreams, she couldn’t have imagined this happening for her grandson. So, of course, I feel all of that pressure and, of course, the added pressure of the controversy. But when it comes down to it, as I said earlier, Texas is Texas, and I’m extremely excited and proud to be leading the band. And a calm sea never made a skillful sailor.

If you found the reporting above valuable, please consider making a donation to support it. Your gift pays for everything you find on KUT.org. Thanks for donating today.