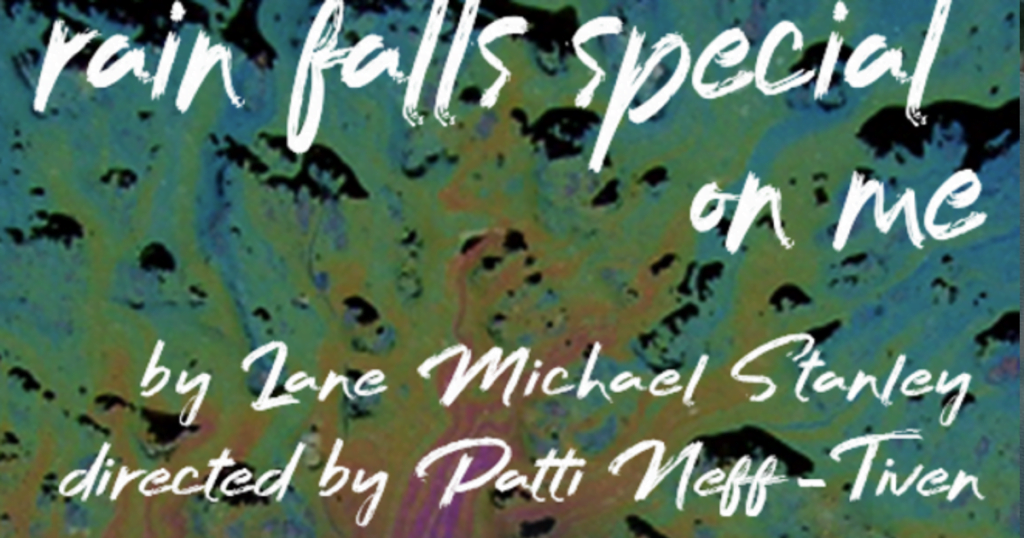 “We’ve been working on rain falls special on me for well over two years,” says Patti Neff-Tiven, co-artistic director of Ground Floor Theatre. “It’s an original piece by Lane Michael Stanley, who at the time the play was written was a student at UT. We had just done the auditions for the show, we had cast it, and we were just a couple of weeks away from starting rehearsals when Covid hit.”

Neff-Tiven, who directs rain falls special on me, has spent the past year and a half wanting to stage the play, rescheduling its production again and again until she finally felt it was safe enough to perform a show in a theater with a live audience again. “We wanted it to be [a] live performance,” Neff-Tiven says. “It really deserves it and really needs to be.”

That’s not to say that Ground Floor isn’t taking Covid precautions seriously. “We are reducing capacity, we’re making this a very small, intimate show, so folks are spaced out” Neff-Tiven says. “We’re requiring masks for audiences [and] all of the cast and crew and staff at Ground Floor Theater are fully vaxxed. We’re asking folks that are not vaccinated to stay home and watch the livestream.”

The play was written two years ago, and it’s very specifically set in 2019 Austin, Texas. “It’s a play about a group of folks here in Austin who are experiencing homelessness,” Neff-Tiven says. “It takes place outside of a theater where our [central] character Mikey has set up his little space that’s become his own home, and these are the people that are his friends and other folks that are houseless that come around and spend time in his space.”

McDowell says he kept the play and the character in his mind during that time, but didn’t want to overprepare or prepare too early. “If you do it too early, then sometimes you get too relaxed in it,” he says. “Or you forget the nuances.”

Co-star Meredith O’Brien, who plays Miss Candace, says she remained thankful to be a part of rain falls special on me during the long delay. “I have continued for the last two years to thank my lucky stars that I got cast in this play,” she says. “It’s a glorious play with incredible people, [and it’s] a total honor to be a part of it.

O’Brien drew from some family experience to connect with her character, who lives with schizophrenia and paranoia. “I’m the middle child in my family,” she says. “I have two sisters and they both have paranoid schizophrenia. I’ve never had any manifestation of that illness, and I realized – it was such an eye-opener – that I have always looked at the illness from the outside. And so it was really a very interesting experience for me to try to step inside that.”

“We have put so much of our passion and our time and all of our energy into the show for two years,” Neff-Tiven says. “So it’s amazing to actually be in the room together again with actors and [to be] creating and really doing this thing which I didn’t know if I was [ever] going to get to do again.”

After such a long break, Neff-Tiven says all the Covid safety precautions that Ground Floor is dealing with aren’t diminishing her excitement about putting on a show for a live audience again. “It’s reinvigorated my love of theater, honestly,” she says. “It’s like I don’t even remember what it’s like, so I can’t wait to see it happen. To have people in the space like that and in the chairs!”

‘rain falls special on me’ runs from August 26 – September 3 at Ground Floor Theatre, with three livestreams of the show available during the run.