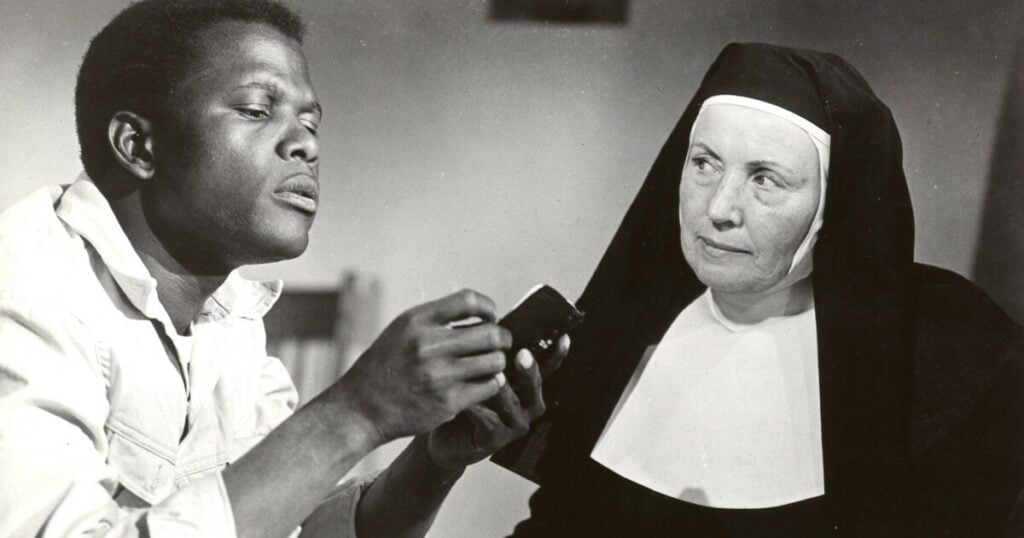 Sidney Poitier, groundbreaking star of American movies, has died at the age of 94. His death was confirmed by the office of the prime minister of the Bahamas, according to multiple news organizations — including both wires.

Poitier was the first Black person to win a Best Actor Oscar — and for people of a certain age, his image was indelible: his smooth, commanding presence, his dark skin, his searing good looks, bemused eye rolls and memorable physicality. It all symbolized — and offered a challenge to — the way Black men were represented in movies, and how they might be seen in the real world.

In A Raisin in the Sun, Lorraine Hansberry’s landmark work about the dreams and disappointments for a Black family in 1950s America, Poitier plays Walter Lee Younger. Walter aspires to open his own business, but finds his big plans frustrated. Poitier first played the role on stage, with actor Glynn Turman as Walter’s son Travis.

“We were in Chicago and it was just freezing,” he recalls. “And I remember watching him take the time to stand there, in this cold, and sign all of these autographs. I said, ‘Doesn’t he feel the cold? Doesn’t he know it’s freezing out here?’ Because the time he took with each person to sign these autographs just made him in my view grow bigger, taller and stronger… I said, man, who IS this guy?”

As Detective Virgil Tibbs in 1967’s <em>In the Heat of the Night</em>, Poitier famously struck back after being slapped by a white murder suspect.

Sidney Poitier was well aware of his own symbolism. His life began far more humbly than the fame he would later negotiate; his first years were spent on Cat Island in Bahamas, as the youngest of nine. His parents, Evelyn and Reggie, were tomato farmers.

The Poitiers brought their harvest to market in Miami by boat, and Sidney was born prematurely on one such trip. He was so small that he wasn’t expected to survive. But he did.

Speaking with NPR in 2009, Poitier recalled his family’s move to Nassau when he was 10. He had never seen his face in a mirror before then. “I saw my teeth. and they were quite acceptable, they looked pretty ok. And my eyes, my hair… me! I was looking at myself,” Poitier remembered.

His life in the Bahamas could hardly prepare him for becoming the most familiar of all Black men seen in Hollywood movies. His everyday workers and professional businessmen were elegant, flawless, dignified; they never were villains. In the 1958 movie, The Defiant Ones, Sidney Poitier shared top billing with Tony Curtis, and even as a fugitive, he was hard to dislike.

Poitier’s name above the title marked a turning point for his career. He was becoming more widely accepted by moviegoers. Sidney Poitier’s rise in popularity seemed linked with the hopes of the civil rights movement.

Five years later, in Lilies of the Field, Poitier portrayed Homer Smith, a handyman reluctant to help a group of German nuns lacking bricks or money for a new chapel. He made history with Lilies of the Field: In 1964, the same year as the passage of the Civil Rights Act, he became the first Black man ever to win as Oscar for Best Actor.

In 1967, Poitier became the top box office draw with three popular movies out the same year: To Sir With Love, Guess Who’s Coming To Dinner, and In The Heat of the Night, in which he played big city detective Virgil Tibbs. In one iconic scene, Tibbs questions a murder suspect, a wealthy plantation owner, who slaps him — and the detective immediately slaps back. The white man is taken by surprise, and so were many moviegoing audiences.

Sidney Poitier told WHYY’s Fresh Air back in 2000 that the script had called for Tibbs to be slapped, and then leave. Poitier says he refused to turn the other cheek. To him, it was an opportunity to show real anger at a white man for his mistreatment, and it held meaning far beyond the movie house.

“That kind of a scene, which would be electrifying on the screen, was always either avoided, not thought of,” he said. “And I insisted that if they wished my participation in the film, that they would have to re-write it to exemplify that.”

Film critic Elvis Mitchell says there was a time when Black audiences were just happy to see someone on screen who wasn’t, for example, carrying a tray. But eventually, dissatisfaction with the civil rights movement and Poitier’s mostly non-threatening roles made him an easy target. “He suddenly went from being the lone representation of his race to being unfairly castigated as the man who apologized for being Black. And he was just working, he wasn’t in control of the movie business, he didn’t choose to make the movies — he chose to be in them, because he just wanted to work.”

Against the hot wind of criticism, Poitier set a new course, claiming new territory for Black performers: He starred in, and directed comedies with large Black casts — the best known are Uptown Saturday Night, and Let’s Do It Again. There was a romance, For the Love of Ivy, in which he played opposite the late singer and actress Abbey Lincoln. His debut as a director was Buck and the Preacher, a Western with comic touches, about freed slaves homesteading out West.

As he moved further away from acting, he directed Gene Wilder and Richard Pryor in Stir Crazy in 1980 his biggest commercial hit as director. In 2002, nearly 75 years old, Sidney Poitier received an honorary Oscar for lifetime achievement.

“I accept this award in memory,” he said on stage, “of all the African American actors and actresses who went before me in the difficult years, on whose shoulders I was privileged to stand to see where I might go.”

There was a standing ovation for Sidney Poitier. Halle Berry and Denzel Washington won Best Actress and Best Actor that night, marking a new first at the Oscars. In 2009, President Barack Obama awarded Sidney Poitier the Presidential Medal of Freedom, the highest civilian honor in the United States.