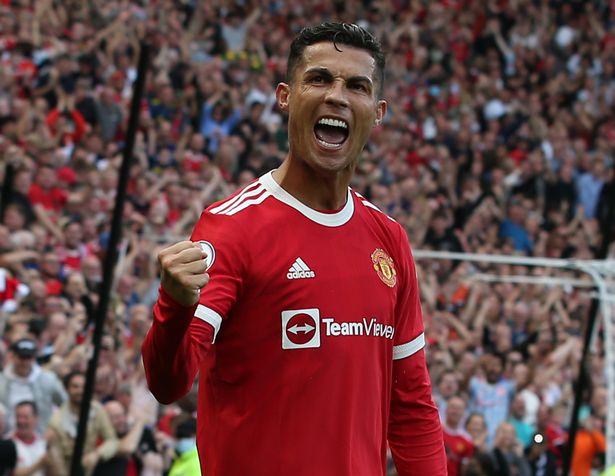 Manchester United beat Newcastle 4-1 at Old Trafford on Saturday with Cristiano Ronaldo scoring twice on his first appearance back, as Bruno Fernandes and Jesse Lingard completed the scoring 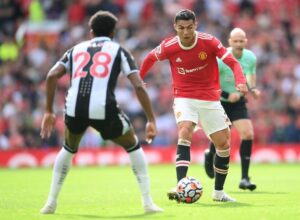 Cristiano Ronaldo showed he still has a spring in his step

Cristiano Ronaldo finally made his second debut for Manchester United after a highly-anticipated build-up, and made an instant impact.

The Portuguese superstar was thrown in from the off against Newcastle in the Premier League clash at Old Trafford on Saturday, 11 days after he completed his return to the club.

All eyes were on United’s No.7 from the get go, having spent 12 years away – and he had clearly read the script, as he popped up in the right spot at the right time to break the deadlock.

Mason Greenwood cut in from the right before his shot at goal was only parried by the goalkeeper into the path of Ronaldo, who had followed it up expertly to put his side ahead on the stroke of half-time.

United broke away and Ronaldo jolted into life, speeding through on goal and hooking Paul Pogba’s pass into his path before firing between Woodman’s legs to bag his second.

Bruno Fernandes then struck home a fine effort from distance before Jesse Lingard completed the scoring and a pleasant afternoon for Ronaldo back at Old Trafford.

Here are five things we noticed about his debut.

The 36-year-old is still in unbelievable shape, but many felt he could largely be consigned to a stationary role at the tip of United’s attack.

While he did play centrally, Ronaldo was drifting left and right across the front line between the edges of the 18-yard box as he looked to find space.

Cristiano Ronaldo scores on Man Utd debut as fans join in with iconic celebration
undefined
And his quick movement caused Newcastle a few problems as he almost latched on to a Bruno Fernandes pass early on, while his darting run opened up plenty of room for Jadon Sancho’s chance.

He wasn’t just the focal point, and had no qualms with dropping deeper to link up play.

United fans couldn’t take their eyes off him, and neither could Newcastle’s defenders – to do so would be at their peril, as they soon found out.

The midfielder linked up well with his compatriot, and often tried to find Ronaldo at various points in and around the box.

That connection will be pivotal to any success United are likely to have over the next couple of seasons, but Fernandes appears keen not to let Ronaldo completely rule the roost.

That much was evidenced by his long-range effort trying to catch Newcastle’s goalkeeper off guard from near the halfway line.

It brought a cheer from the United crowd and had Freddie Woodman scrambling to cover his lines.

Fernandes didn’t find the net, but the message was clear: this stage is big enough for both of us.

Even after Ronaldo had bagged his brace, it was Fernandes who had the last laugh, thumping home a long range pearler to steal the show.

It’s certainly going to be entertaining.

Well nothing really, except the fact that this is the first time he’s done it in a United shirt, and the home crowd went right along with it.

His pretty much iconic celebration is now recognised worldwide, but it only became what it is today after he had moved on to pastures new.

Yet the United fans wasted no time in joining in with a huge chorus of “Siiiuuuu” to mark his debut goal.

And you know what… it fit Old Trafford perfectly, in a kind of dominant, overbearing way which can intimidate the opposition, particularly when you’ve got one of the greatest ever players in your side.

Something tells us it won’t be the last we hear of it either.

That was pretty much what United’s second goal was borne from: sheer speed as Ronaldo clicked up a couple of gears and raced towards goal.

Paul Pogba’s pass was weighted perfectly, but Ronaldo’s run had put him in a superb position to use his momentum and deft first touch to drive past Isaac Hayden to score.

He made it look easy. And if that’s the kind of threat United are going to possess going forward then they could really cause a few problems this season.

Make no mistake, there’s plenty more to come from Ronaldo yet.

As mentioned earlier, Ronaldo was not the stagnant, archetypal target man he has been billed to be of late, and showed enough exuberance to suggest he can play a fluid, all-action role.

One thing he won’t do, however, is press his opponent. Not intensively anyway.

Which is fine. United’s game is not necessarily about pressing, and Ronaldo is not the only striker in the division to ignore that side of his game.

The question is whether United can afford him not to?

On several occasions Newcastle caught them on the counter attack and carved United open.

A better team would have punished them in the first half, and while Newcastle did get their goal, it wasn’t enough to take a share of the points.

That was no exactly Ronaldo’s fault nor problem, especially not on his debut of all days. His lack of defensive contribution is outweighed by his goalscoring prowess, and is something United can concede against lesser opposition.

But the real test for United will come against the bigger teams, who make every player count.