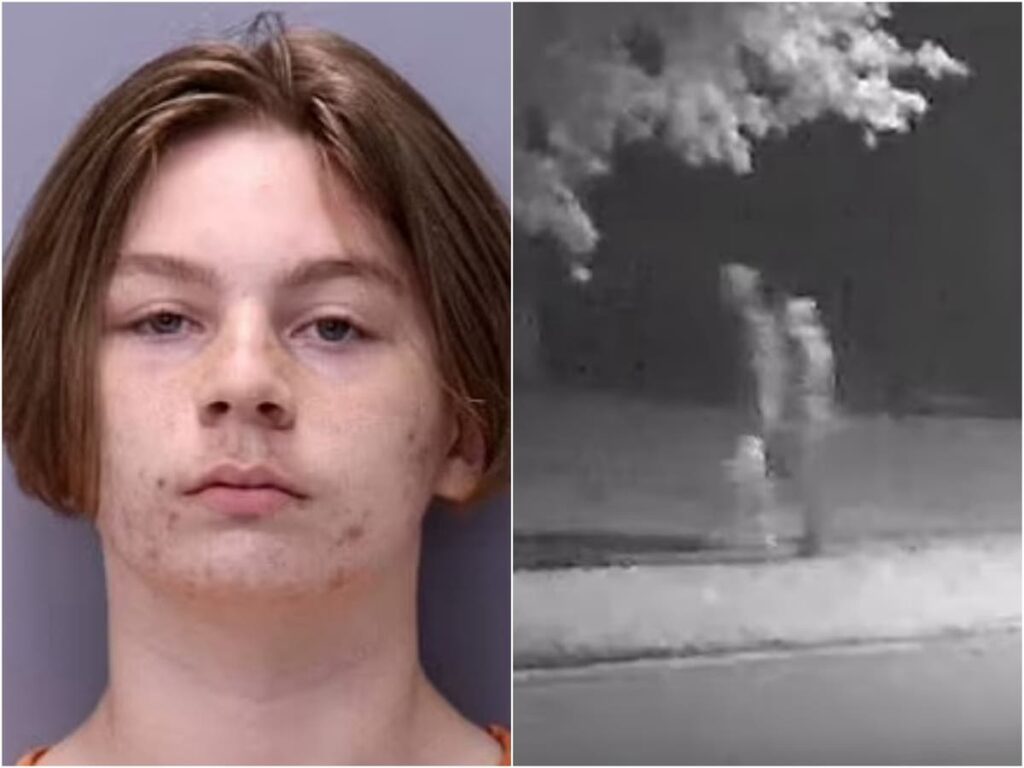 The footage allegedly shows Mr Fucci walking with the cheerleader on the night that she was killed and then running on his own in St Johns, south of Jacksonville in northern Florida.

Other video evidence released by the St Johns County Sheriff’s Office on Tuesday reportedly shows Mr Fucci’s mother, Crystal Smith, washing blood off his jeans as her son was being questioned by officers about Tristyn.

Ms Smith has been charged with evidence tampering after both the jeans and the drain in the family’s home tested positive for blood.

Tristyn’s body was found on 9 May less than half a mile from Mr Fucci’s home. An autopsy revealed that she had been stabbed 114 times. She had 35 wounds in her head and neck, and 49 wounds across her arms.

Snapchat videos showing Mr Fucci sitting in the back of a police vehicle mentioning Tristyn were also made public. The 14-year-old has been charged with first-degree murder as an adult.

Investigators say surveillance footage from a neighbour’s house shows the last moments Tristyn was seen alive, and allegedly depicts Mr Fucci and Tristyn walking towards a forested area after midnight on the night that Tristyn was murdered.

Within two hours, the same camera recorded a person, allegedly Mr Fucci, running back in the other direction before 2am.

Other footage made public by the authorities purportedly shows Ms Smith walking upstairs in her home and grabbing her son’s jeans before allegedly washing blood off them.

Blood was later found on the jeans and in a sink in the home, court documents state.

The State Attorney’s Office released three videos recorded on Snapchat that show Mr Fucci in a police vehicle with a friend when Tristyn was missing.

“We’re having fun, in a f***ing cop car,” Mr Fucci said while looking into the camera and smiling. “Tristyn if you f***ing walk out the damn…,” he added. Tristyn would “see this in a month,” the friend said.

In a Snapchat video where Mr Fucci appears to be alone in the cop car, he says: “Guess who’s in a f***ing cop car… tripping, dude.”

Mr Fucci and Tristyn attended Patriot Oaks Academy in St Johns. Documents released in July show that a classmate and friend of Mr Fucci at the school told police that he often spoke about killing people, adding that in the month around Tristyn’s murder, Mr Fucci said he wanted to take someone into the woods and stab them.

He would “take his knife out and pretend to stab her with it,” the friend said, adding that he would also “draw graphic pictures depicting mutilated bodies”.

The friend told law enforcement officials that when Mr Fucci became angry, he would hear voices that told him to kill. Detectives searched Aiden’s home and discovered “violent” drawings of women.

An incident report included in the documents released shows that when Mr Fucci’s mother told him in a police interview room that Tristyn’s body had been located, he said: “How is that my problem?”

Police have said that a knife was found in a pond close to Tristyn’s body, matching her wounds.

The day after the body was found, Mr Fucci was arrested on a charge of second-degree murder and held in a juvenile justice centre.

His DNA was found on Tristyn’s body, investigators have said. Prosecutors later raised the charges to first-degree murder.

Mr Fucci has pleaded not guilty and is jailed without bail, while his mother was released after posting a $25,000 bond. Pretrial hearings are set to begin on 1 September.