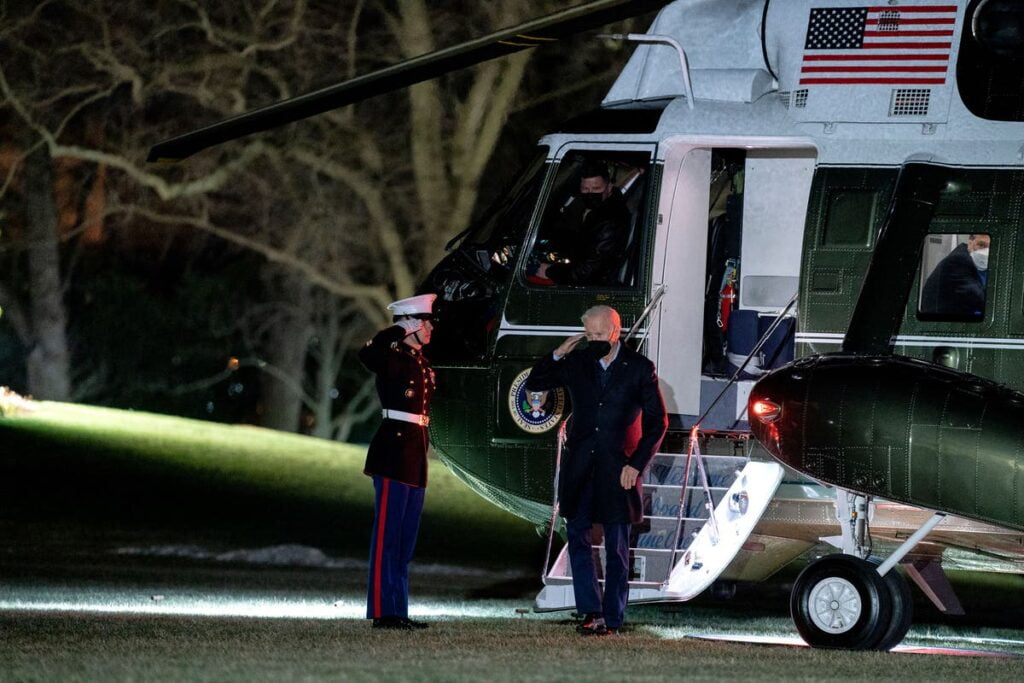 President Joe Biden’s approval rating is sitting at just 40 per cent, one year into his presidency.

A new poll from Morning Consult/Politico showed that 56 percent of respondents disapproved of his job performance so far, while 68 per cent also felt the US was moving in the wrong direction.

The poll results come as the White House plans a Wednesday press conference for Joe Biden to promote his administration’s efforts to combat the Omicron surge and the greater availability of home testing kits.

The president will also announce a plan to distribute hundreds of millions of N95 masks for free to Americans, according to Politico.

The masks will reportedly come from the federal government’s stockpile of 737 million N95 masks in the Strategic National Stockpile, which have been sourced from 12 domestic manufacturers.

Last week Mr Biden acknowledged that for some Americans getting hold of high-quality masks was “not always affordable or convenient.”

Meanwhile, the House committee investigating the January 6 insurrection of the US Capitol has subpoenaed and obtained records of phone numbers linked to Eric Trump and Kimberly Guilfoyle, Donald Trump Jr’s fiancee, according to CNN.

It comes as additional subpoenas have been issued on Tuesday to other members of Donald Trump’s inner circle, including Rudy Giuliani, Jenna Ellis, Sidney Powell, and Boris Epshteyn.

Jen Psaki has hit out at the suggestion President Joe Biden did not acknowledge the antisemitic attack in Colleyville as an act of terror.

The White House Press Secretary shared a tweet on Tuesday evening damning the suggestion and branding it a political attack.

CNN’s Dr Sanjay Gupta has this report on the new release of hundreds of millions of high-grade Covid-19 masks from the strategic national stockpile.

As Secretary of State Antony Blinken travels to Kiev to meet with Ukrainian officials before talks with his Russian counterpart Sergey Lavrov, the Biden administration is warning that the anticipated Russian invasion of Ukraine could begin at any moment.

Senate Democrats led by Chuck Schumer are planning a procedural move tonight that will put their voting rights legislation to the test. It is not expected to work, but could at least force some senators who have stayed at arm’s length from the debate to nail their colours to the mast. Here’s a sense of what will happen later.

Ron DeSantis, one of the US’s highest-profile Republican governors, is taking steps to shore up his credentials as an election security hardliner. Alex Woodward reports on his latest plan: to secure millions of dollars to fund a state “Office of Election Crime and Security”.

The few cases of voter fraud that have been uncovered in his state since 2020 have mainly been the work of Trump supporters.

Via the Washington Post’s JM Rieger, watch below as Joe Manchin tries to explain his position on the voting rights legislation that he and Kyrsten Sinema are blocking by refusing to allow modifications to the filibuster.

How voter suppression laws are playing out in Texas

As pressure mounts on Senate Democrats to shore up voting rights to at least some degree with new legislation, reports from Texas give some sense of the obstacles that new laws on voter registration have put in place.

Florida State Senator Audrey Gibson has criticised a push in the state to introduce further voting restrictions as “utterly ridiculous” and “an effort against minority voters”.

She said she was “alarmed” at what “was coming out of the governor’s office”.

She added: “It seems that the governor wants to out-Trump Trump.”

Senate Democrats plan to move forward with their plan to enact a talking filibuster to pass voting rights despite Democrats Joe Manchin and Kyrsten Sinema continuing to oppose the changes.

Read my colleague Eric Michael Garcia’s write up of what is happening in the Senate here:

What is the new Voting Rights Act, and why do Republicans (and some Democrats) stand in the way of it?

Congressional Democrats have been pushing for years to expand voting access with little success.

Last week, House Democrats passed a voting reform package that would set federal minimum requirements for early and mail-in voting and allow for same-day voter registration, among other things.

Many Democrats in Congress are pushing to change the filibuster, a parliamentary delay tactic.

However Democratic senators Joe Manchin and Kyrsten Sinema have both opposed changing the rule.