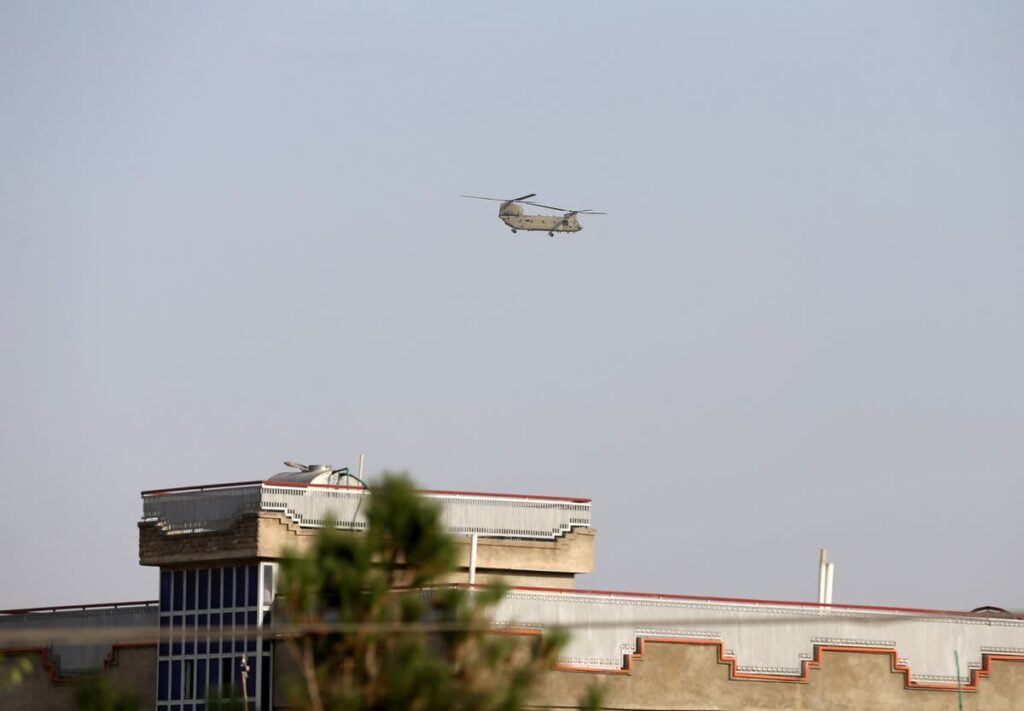 The departure of US embassy personnel from Afghanistan after the government was toppled by the Taliban has left President Joe Biden facing uncomfortable questions about the legacy of the US in the country, as well as criticism over his own administration’s handling of the final days of America’s longest-running war.

The American-backed government in Afghanistan totally collapsed on Sunday in a devastating moment that seemed to erase decades of hard-fought gains by the US military and its allies, with Taliban officials proclaiming that the “Islamic Emirate of Afghanistan” would take its place.

The lightning-fast gains of Taliban fighters left serious questions about whether any of the US’s efforts over the past two decades in the country had any lasting positive effects.

Biden administration officials and the president’s Republican critics have battled over heavy-handed metaphors for the situation in recent days as scope of the US failure to build a truly capable Afghan defense force came into view. Pictures and videos emerged of militants releasing prisoners from Bagram Air Base and Kabul’s prisons and snapping their own photos in the palaces of warlords, and atop US-manufactured armored vehicles.

Republican Congressman and House Minority Whip Steve Scalise, who in February was still refusing to admit that Biden won the election, declared on Sunday that images of US embassy staff fleeing on helicopters and planes from Kabul were the “predictable” consequences of his leadership.

“It’s a very dire situation when you see the United States Embassy being evacuated. In fact you just had President Biden a few days ago saying you wouldn’t see helicopters evacuating the embassy like Saigon, and yet here we are. This is President Biden’s Saigon moment and unfortunately it was very predictable,” Mr Scalise said, making a reference to evacuation of the South Vietnamese capital at the end of the Vietnam War nearly 50 years ago.

White House officials did not immediately respond to a request for comment from The Independent. Pentagon officials also did not return an emailed request.

Others, including many in the media, pointed out Mr Biden’s previously stated confidence in the stability of Afghanistan’s government and expressed shock over the rapid surrender of its military. CNN anchor Fareed Zakaria declared the situation “one of the greatest military collapses” in human history.

Just weeks ago, Mr Biden had very publicly rebuffed an assertion from a reporter that his own intelligence officials had concluded that Afghanistan’s government would “likely” fall in the coming weeks, asserting: “That’s not true.”

“There’s going to be no circumstance where you see people being lifted off the roof” of the US embassy, Mr Biden contended, again referencing the fall of Saigon.

On CNN’s State of the Union on Sunday as Kabul fell to the Islamic insurgents, the secretary of state, Antony Blinken, battled that same imagery.

“This is not Saigon,” he stated.

He continued: “We haven’t asked the Taliban for anything. We’ve told the Taliban that if they interfere with our personnel, with our operations as we’re proceeding with this drawdown, there will be a swift and decisive response.”

Mr Blinken went on to insist that the rapid US drawdown was a result of the 1 May deadline for the removal of most US combat troops originally set by the Trump administration.

He said the US faced a decision of continuing the drawdown or returning to a full-scale war with the Taliban as the militants captured wide swaths of the county.

“[W]e would have been back at war with tens of thousands of troops to go in,” he explained.

One Reuters correspondent, Idrees Ali, responded to Mr Blinken’s insistence about comparisons to the Vietnam War on Twitter, writing: “Secretary Blinken is correct. The airlift from Saigon did not happen until two years after a peace deal was signed. The evacuation from Kabul is happening with two weeks still left under Biden’s own timeline for an end to the mission.”

Others, including apparently many across social media platforms in the region, shared the same view.

The New York Times reported that there were at least 10,000 Americans, including Afghan Americans, and Afghan employees who work for the US government who needed to be got out of the country.

Images on Al Jazeera showed Taliban fighters in the presidential palace on Sunday evening, and news reports indicated that the president, Ashraf Ghani, had fled to Tajikistan.

At Kabul’s airport, a chaotic scene unfolded as Afghans clamored for spots on the last commercial flights out of Afghanistan as well as spots on American military AC-130 aircraft.

Reports emerged that a Sunday meeting between Biden officials, including the defence secretary, Lloyd Austin, and Congressional leaders, had devolved into stinging criticism from House GOP leader Kevin McCarthy, who told the White House: “You say you had this plan. No one would plan out this outcome. The ramifications of this for America will go on for decades and it wont just be in Afghanistan.”

“You can’t buy will and you can’t purchase leadership. That’s really what was missing,” Mr Austin said in response, according to CNN.

Former GOP Rep Denver Riggleman, a former officer in the Air Force, summed up his own feelings on Twitter as the images of Taliban fighters entering Kabul continued.

“I deployed on Sep 21, 2001. So many lost in the Towers. So many brothers & sisters in arms lost. When I first arrived, I researched what the Taliban did to women. I briefed the troops on it. Horrific images seared in my mind: executions, hangings, stonings,” he wrote, adding simply: “I’m struggling today.”