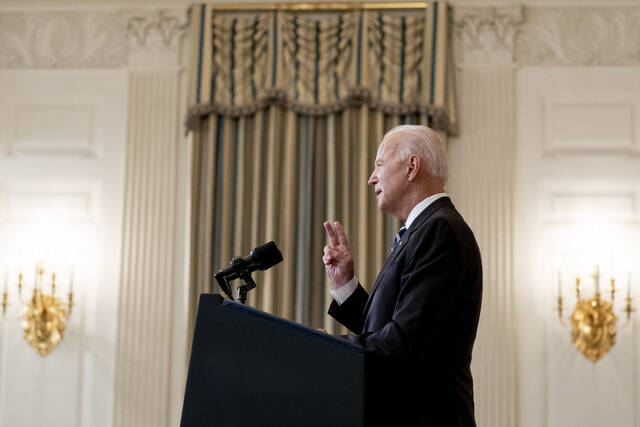 WASHINGTON — President Joe Biden’s aggressive push to require millions of U.S. workers to get vaccinated against the coronavirus is running into a wall of resistance from Republican leaders threatening everything from lawsuits to civil disobedience, plunging the country deeper into culture wars that have festered since the onset of the pandemic.

In South Carolina, Gov. Henry McMaster says he will fight “to the gates of hell to protect the liberty and livelihood of every South Carolinian.” South Dakota Gov. Kristi Noem, a potential 2024 presidential candidate, says she is preparing a lawsuit. And J.D. Vance, a conservative running for a U.S. Senate seat in Ohio, is calling on businesses to ignore mandates he describes as Washington’s “attempt to bully and coerce citizens.”

“Only mass civil disobedience will save us from Joe Biden’s naked authoritarianism,” Vance says.

Biden is hardly backing down. In a visit to a school Friday, he accused the governors of being “cavalier” with the health of young Americans, and when asked about foes who would file legal challenges, he retorted, “Have at it.”

The opposition follows Biden’s announcement Thursday of a major plan to tame the coronavirus as the highly contagious Delta variant drives 1,500 deaths and 150,000 cases a day. Biden is mandating that all employers with more than 100 workers require their employees to be vaccinated or test for the virus weekly, affecting about 80 million Americans. Another 17 million workers at health facilities that receive federal Medicare or Medicaid also will have to be vaccinated, as will all employees of the executive branch and contractors who do business with the federal government.

The move brought Republican outrage from state capitals, Congress and the campaign trail, including from many who have supported vaccinations and have urged their constituents to take the shots.

“The vaccine itself is life-saving, but this unconstitutional move is terrifying,” tweeted Mississippi Gov. Tate Reeves.

Texas Rep. Dan Crenshaw, who has promoted the vaccines’ safety to his constituents, said, “The right path is built upon explaining, educating and building trust, including explaining the risks/benefits/pros/cons in an honest way so a person can make their own decision.”

More than 208 million Americans have received at least one vaccine dose, but some 80 million remain unvaccinated, driving infections. There are now about 300% more new daily covid-19 infections, about two-and-a-half times the hospitalizations and nearly twice the number of deaths as at the same time last year.

While breakthrough infections do happen among the vaccinated, those cases tend to be far less severe, with the vast majority of deaths and serious illnesses occurring among those who have not received shots.

The pandemic is worsening in many of the states where governors are most loudly protesting the president’s actions. South Carolina, for example, is averaging more than 5,000 new cases per day and has the nation’s second-highest infection rate. A hospital system there started canceling elective surgeries this week to free staff to help with a crush of covid-19 patients.

In a section of Idaho, overwhelmed hospitals have implemented new crisis standards to ration care for patients. And in Georgia, hospitals have been turning away ambulances bringing emergency or ICU patients.

But Republicans and some union officials say the president is overreaching his constitutional authority. They take issue, in particular, with the idea that millions could lose their jobs if they refuse to take the shots.

Biden, however, says he’s doing what needs to be done to fight resistance that has continued despite months of encouragement and incentives. In his White House speech announcing the new measures, he was visibly frustrated, criticizing the remaining holdouts and accusing some elected officials of “actively working to undermine the fight against covid-19.”

“Instead of encouraging people to get vaccinated and mask up, they’re ordering mobile morgues for the unvaccinated dying from covid in their communities,” he said.

Court fights are sure to follow in a number of states.

Vaccine mandates are supported by a small majority of Americans. An August poll from The Associated Press-NORC Center for Public Affairs Research found majorities support requiring vaccinations for health care workers, teachers at K-12 schools and public-facing workers like those who work in restaurants and stores. Overall, 55% back vaccine mandates for government workers. And about half of working adults favor vaccine mandates at their own workplaces.

But the numbers are deeply polarized, with Democrats far more likely to support mandates than Republicans, who have also been less supportive when it comes to getting shots themselves.

While demand for vaccinations has risen over the summer, a persistent number of Americans have said they have no intention of ever receiving them.

GOP pollster Frank Luntz, who has held focus groups and worked with the Biden administration to try to combat vaccine hesitance, says that, without further measures, Biden is likely to see vaccinations top out at about 75% of the population.

“The only way to exceed that, which he needs to for herd immunity, is to mandate it,” Luntz said. “It will make a lot of people angry and even more resistant, but those who are simply hesitant will act now. He’s done the best he can under the circumstances.”

Still, many Republicans are unmoving and unforgiving, especially those who are running for office and see the issue as one that could motivate Republican voters to turn out in next year’s midterm elections.

Mike Gibbons, who is running for the U.S. Senate in Ohio, accused “Joe Biden and his Big Brother administration” of having “crossed into authoritarian territory.”

“The American people have a right to assess the risks and benefits of the vaccine and make the decision on what is best for themselves and their families,” he said. “That decision should be made by doctors and the individual, not the government.”

With the midterms coming, Drew McKissick, South Carolina’s GOP chairman, says he imagines Democrats in his state being tied to their party’s “radical liberal” policies.

“South Carolinians don’t take kindly to mandates. They never have,” McKissick said, arguing the national political tenor is “going to put (Democrats) more in a corner.”

But Steve Schale, a Democratic strategist who leads the pro-Biden super PAC Unite the Country, which has also done polling showing support for mandates, said he’s not especially concerned about potential political backlash. He argued those who are most likely to be angered by the move are probably already Biden critics.

“Of all the things I worry about in the midterms,” he said, “that doesn’t scare me.”

“Yes, we do see some loud vocal opponents of what the president announced yesterday. That’s not a surprise. It’s unfortunate, it’s disappointing, it’s sad because, ultimately, these steps will save lives,” she said, “but we remain confident in our ability to move the agenda forward.”