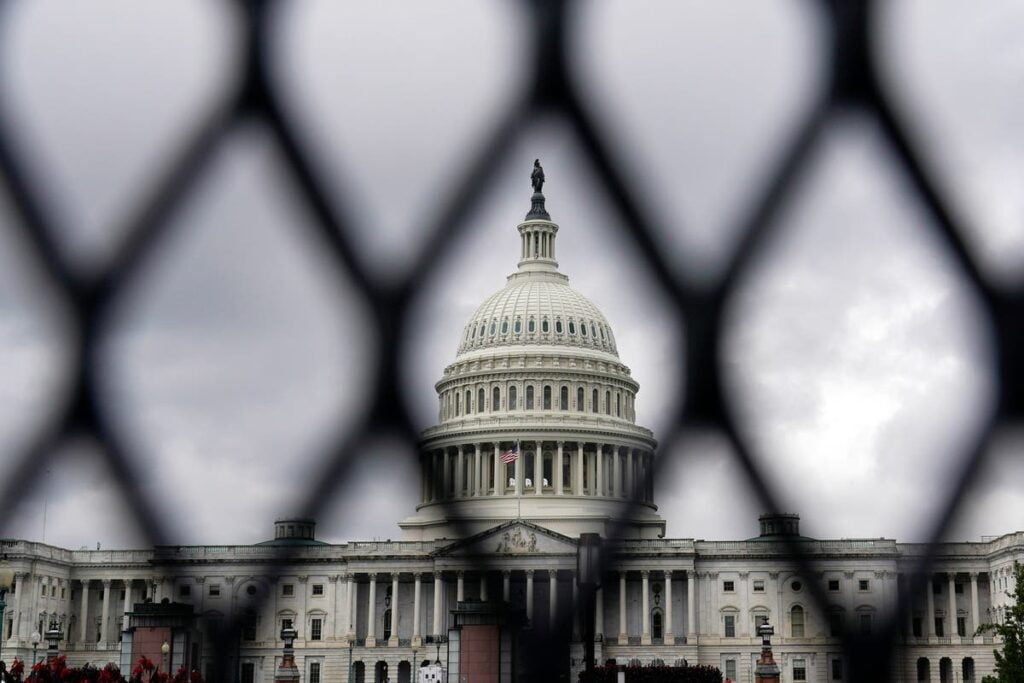 At the opening of the Justice for J6 Rally, organiser Matt Braynard was quick to say that people who partook in violence against police officers during the 6 January insurrection at the US Capitol should be held accountable.

But moments later, he invoked the name of Ashli Babbitt, the rioter who was shot and killed while trying to breach the House and who threatened the lives of police officers and members.

These contradictory ideas dominated the rally, which was sparsely attended by only a couple of hundred people (despite organisers suggesting ahead of the gathering that up to 700 people could attend). There were limited amounts of confrontations, with the exception of one counter-protester getting into an argument with a demonstrator, which led to the police separating them, and another person on a bike screaming who was escorted out by police.

Retired boxer and conservative activist Cara Castronuova was one of the leading voices at the event and decried the treatment of people she considered political prisoners, criticising the “false narrative of 6 January being an insurrection when not one person has been charged with this crime”, which she said was tampering with the potential jury pool.

Ms Castronuova also criticised the media for suggesting the gathering would be a white supremacy rally.

“Do I look like a white supremacist to you,” Ms Castronuova, who has Chinese and Italian heritage, asked, adding that she voted for Barack Obama and Bill Clinton along with Donald Trump.

But absent from the dais, as freelance journalist Molly Conger noted, was the co-founder of Ms Castronuova’s Citizens Against Political Persecution – Randy Ireland of the Proud Boys. According to the Southern Poverty Law Center, Mr Ireland had touted the event last month.

Some of the people who attended the 6 January rally said that they thought there was unfair treatment of those arrested, and sought to parse between people who committed acts of violence versus those who just walked into the Capitol.

“I think the violent criminals who assaulted police, they should be punished,” said Adam, who did not give his last name. “But the people that were let in by Capitol Police – the police removed the guardrails, open the door and let people in – that to me is entrapment.”

Adam was also carrying an American flag featuring the symbol of Three Percenters, a right-wing militia movement according to the Anti-Defamation League, but said he wasn’t aware of the connotations of the symbol or the organisation. Later on, Mr Braynard noted he asked people to remove the flags, which they did.

Similarly, Ms Castronuova read a letter supposedly from Nicole Reffitt, the wife of someone imprisoned for his actions, saying her laptop was trashed by the FBI. But WUSA9’s Jordan Fischer reported that her husband was a Three Percenter. Earlier this year that he was charged with bringing a semi-automatic handgun to Washington and carrying a semi-automatic weapon on Capitol grounds.

Jennifer Bakalov, who is from Minnesota, said she did not go inside the Capitol complex but was inside the grassy area and wanted to go into the building.

“The only reason I didn’t go in was because my friend was with me and she was afraid,” she said, but added that she had wanted to go in not to hurt anyone but to “put pressure on our congressmen and put the fear of God in them”. When pressed about what that meant, she said “it just means to make them understand that we the people are the ones who govern this nation, not the other way around”.

Ms Bakalov said she was disappointed at the low turnout levels.

“I wish more people would show up, but I know they’re doing rallies all across the nation too, so that could be a reason why there’s not so many attendees,” she said. She added that she was also disappointed in former Vice President Mike Pence for allowing the election to be certified. “I think he totally betrayed our nation.”

At one point, Mr Braynard tried to compare and contrast how 6 January rioters were treated compared with Rep Alexandria Ocasio-Cortez, who protested outside Nancy Pelosi’s office with environmental activists in 2018 before she was sworn in, and people who protested now-Supreme Court Justice Brett Kavanaugh’s confirmation inside Senate office buildings adjacent to the Capitol.

But Madea Benjamin, the co-founder of the left-wing protest group Code Pink, was in the crowd and said that she had protested Mr Kavanaugh’s confirmation and took umbrage at the comparison.

“It’s ridiculous because everything we do, and you had to sign something during that Kavanaugh hearing saying you were a peaceful protester, you were not engaged in any violence,” Ms Benjamin told The Independent. She noted that her partner who got on a chair was charged with violent crime and went to federal court and it took a year to deal with the charge.

“It’s totally disingenuous the way he is trying to one, portray 6 January as a peaceful intervention, and two that we don’t face consequences,” she said.

The rally did not feature members of Congress, although there were two congressional candidates present. The first being Mike Collins, who is running for Georgia’s 10th District, and the second was Joe Kent, who is running in Washington’s 3rd district against Rep Jaime Herrera Beutler, one of 10 Republicans who voted to impeach Mr Trump for inciting the insurrection. Mr Trump has endorsed Mr Kent.