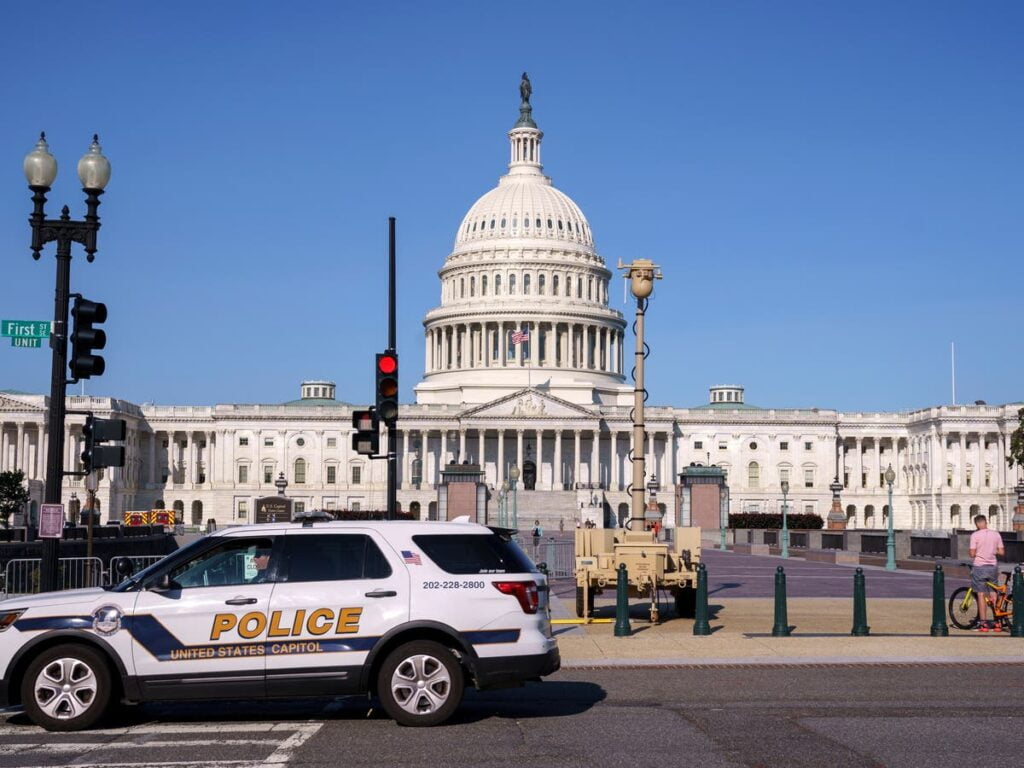 The Capitol Police have requested the support of the National Guard on Saturday if events get violent at a rally of demonstrators supporting those arrested over the 6 January Capitol riot.

“The USCP has asked the Department of Defense for the ability to receive National Guard support should the need arise on September 18,” Capitol Police wrote in a statement. The agency declined to answer follow-up questions, citing security precautions.

Leading up to the 6 January riot, the army initially pushed to reject the District of Columbia government’s request for National Guard presence ahead of that rally.

The National Guard was unable to immediately send troops when needed that day, wasting time during a riot where hundreds entered the white-pillared building, ransacked it and forced the evacuation of lawmakers in the worst attack on the Capitol since the War of 1812.

The re-installation of the perimeter fence around the Capitol will also begin Wednesday night, according to an email sent to Senate staff on 15 September and obtained by The Washington Post. The fencing was erected after the failed security response to the 6 January storming of the building and stayed until two months ago.

The new temporary fencing will take about 24 hours to complete and will encompass Independence and Constitution avenues from First Street NE to First Street NW. “Barring any unforeseen issues,” the email states, the fence will begin to come down on Sunday. The Supreme Court will also have a temporary fence around its perimeter, according to the email.

District police activated all of its force for 17-18 September, and lawmakers have been briefed on security concerns, suggesting that law enforcement is taking a more assertive approach to Saturday’s rally after the security failures during the insurrection.

Organisers of the Saturday rally are embracing a revisionist history of the insurrection, when a violent mob stormed the seat of the US government and disrupted Congress during the certification of President Joe Biden’s election victory. The riot resulted in the deaths of five people, including a police officer.

Matt Braynard, a former Trump campaign operative and founder of Look Ahead America, an organisation that has planned protests in support of people arrested in the riot, has blamed a few “bad actors” for violence on 6 January. He estimated in his permit application that his rally, at Union Square, a public park near the Capitol Reflecting Pool, will have 700 attendees.

Also on Saturday, about one mile away, organisers are promoting an event at Freedom Plaza as a celebratory rally with food and music to denounce the presence of “6 January insurrectionists, Nazis, and white supremacists” in Washington. Those organisers have not provided a crowd estimate but encouraged families to bring children.

Marc Ginsberg, president of Coalition for a Safer Web, a nonpartisan group that advocates for technologies and policies to remove extremist content from social media, worries that opposing sides at the Capitol and Freedom Plaza could create an environment for clashes, similar to the 12 December, 2020, brawls that resulted in multiple arrests and left at least four people stabbed. However, Ginsberg and others said, they are not seeing the kind of mass mobilization for the “Justice for J6” rally in Washington that they saw ahead of 6 January.

In fact, much of the far-right chatter about this rally, including from the Proud Boys, a group with a history of violence, and prominent conspiracy theorists, has discouraged people from attending. They have labelled it a “trap” and “false flag” event aimed to lure them to Washington, where federal officials will arrest them.

Either way, law enforcement and officials appear to be preparing for all possibilities.

Capitol Police said they recently arrested a man with a bayonet and a machete near the Democratic National Committee headquarters. Last month, police said a man who claimed he had a bomb parked a truck near the Capitol and demanded to speak to President Biden, and in April, a man rammed his car into a barricade outside the building, killing a Capitol Police officer.

Although District officials have said they expect the far-right rally on Saturday to be a small gathering with no more than a few hundred people, they are taking extra steps to ensure the safety of residents who may be out at the annual H Street festival in Northeast that typically attracts thousands; a Howard University football game at Audi Field in Southwest; a baseball game at Nationals Park; or a Harry Styles concert at Capital One Arena downtown.

Several House Democratic offices are also closing on Friday in anticipation of the rally, an indicator that many who survived the insurrection are taking steps to avoid a similar situation in case the rally is larger than anticipated. Transportation Security Administration spokeswoman Lisa Farbstein said in a statement Wednesday that travellers will notice increased law enforcement this weekend during a “period of high awareness.”

FBI Deputy Director Paul Abbate said on Tuesday at the Intelligence and National Security Summit that although there is online chatter about the upcoming rally, the bureau did not have any “specific, credible” information about possible violence.

Ron Watkins, longtime administrator of the message board 8kun, formerly known as 8chan, the home of the extremist ideology QAnon, told his followers on his Telegram channel to avoid the District.

“DONT GO TO FBI RALLIES,” he wrote. Users echoed this paranoia, which has increased after Jan. 6 as hundreds have been arrested, with charges against alleged supporters of extremist right-wing groups including the Oath Keepers, Proud Boys and “boogaloo boys” movement.

“Won’t be any patriots there,” one user wrote. “Not after the setup on Jan 6th.”