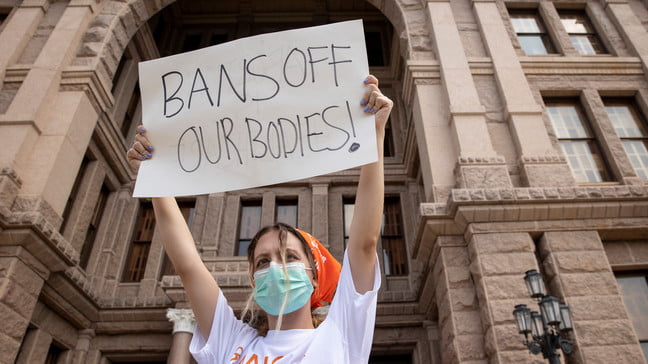 The unusual legal strategy used to ban most abortions in Texas is already increasingly being employed in Republican-led states to target pornography, LGBT rights and other hot-button cultural issues.

While private residents filing lawsuits is a fixture of some arenas like environmental law, some warn that expanding it and applying it to new areas could have a boomerang effect if Democrats were to use it on issues like gun control.

When Attorney General Merrick Garland announced the Department of Justice would sue over the Texas law, he said it could become a model “for action in other areas, by other states, and with respect to other constitutional rights and protections.” He worried about the “damage that would be done to our society if states were allowed to implement laws and empower any private individual to infringe on another’s constitutional rights.”

FILE – In this Sept. 9, 2021, file photo, Attorney General Merrick Garland announces a lawsuit to block the enforcement of a new Texas law that bans most abortions, at the Justice Department in Washington. (AP Photo/J. Scott Applewhite, File)

The concept has already popped up in other states, including on issues like abortion where courts have sided against laws backed by conservatives.

In Missouri, a new law lets people sue local police departments who enforce federal gun laws. In Kansas, residents can go to court to challenge mask mandates and limits on public gatherings, and in Ohio people can sue over any action taken in response to an emergency.

It’s also an enforcement mechanism on laws restricting transgender students’ bathroom use in Tennessee and their sports team participation in Florida.

“These laws are deliberately engineered to avoid challenge in federal court,” Jessica Clarke, a Vanderbilt University law professor who specializes in anti-discrimination law, said about the Tennessee and Florida measures.

In Utah, an anti-porn bill passed last year requiring sites to post a warning about dangers to minors. It was called a free-speech violation by adult-entertainment sites, but the possible onslaught of lawsuits convinced major sites to comply before a single person sued.

Republican Utah Rep. Brady Brammer said he modeled his bill on Proposition 65, which allows people who might have been exposed to potentially carcinogenic materials to sue and collect a kind of “bounty” if they win. Civil enforcement has long been a fixture of environmental law, with private attorneys acting as a kind of extension of stretched regulators. Court settlements with businesses often bring funding to green nonprofits.

FILE – In this May 21, 2021, file photo, Amy Allen, the mother of an 8th grade transgender son, speaks after a Human Rights Campaign round table discussion on anti-transgender laws in Nashville, Tenn. (AP Photo/Mark Humphrey, File)

“Republicans are weaponizing the tool that Democrats thought they owned, which was civil enforcement,” Brammer said. “They’re following the tactics that Democrats have used for years, for decades, and they’re doing it for conservative causes.”

The Texas abortion law, which lawmakers in several other states want to copy, has another unusual feature that vastly expanded the number of people who can sue. Unlike the vast majority of civil law, it doesn’t require people to show they’ve been directly affected.

After the Supreme Court decided not to block the law, just the threat of being sued meant some abortion providers in Texas have stopped offering abortions altogether, even those before the six weeks specified.

But others point out the tactic could come back to haunt Republicans who have long sought to limit the size of court settlements in things like medical malpractice cases.

If a wide-ranging civil-enforcement tactic were applied to gun control, for example, it could allow people to sue gun sellers if the weapon was used to hurt someone, said Texas attorney Michelle Simpson Tuegel, who sued to block the abortion law.

“This law in Texas is a double-edged sword for Republicans,” she said. “It’s potentially really dangerous for them to be pushing something like this forward with other issues that could be turned on them in a similar way.”