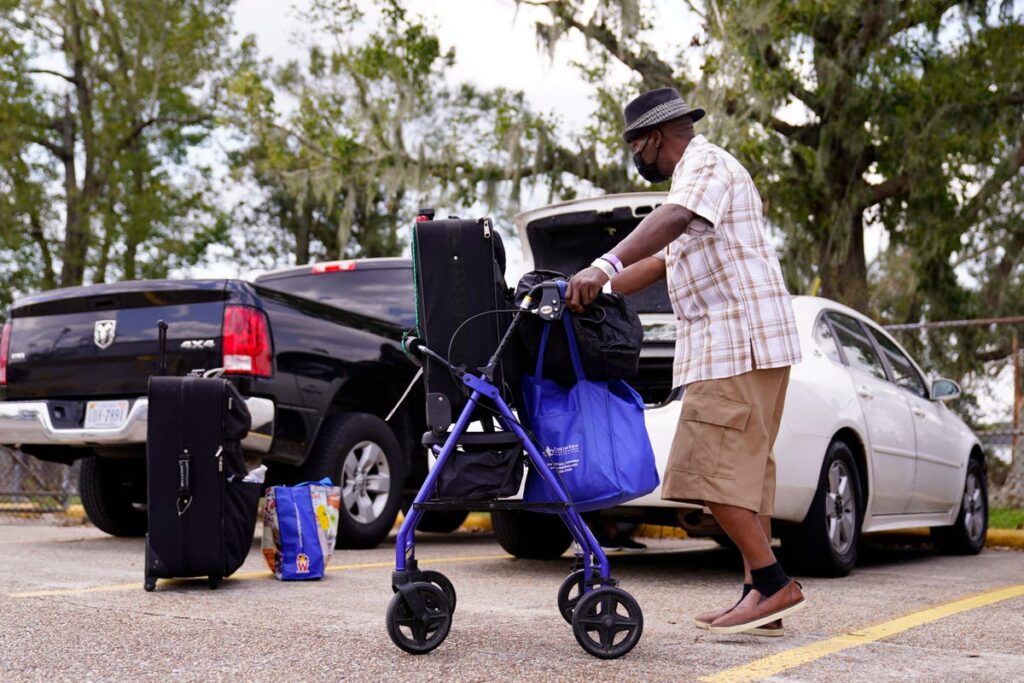 Gwen Warren describes herself as a “strong woman.” But after days without electricity in a hot, sweaty Louisiana summer after Hurricane Ida wiped out the power to her home, she decided it was best to get on a bus and go to a shelter in northern Louisiana until the lights came back on.

“Any place the Lord blesses us to go out of this heat, where we’re able to get some food, get a hot bath and, you know, just some comfort, is fine,” she said. “This heat just got too much for me. I just couldn’t do it anymore.”

Hurricane Ida wiped out power to about a million people across southeastern Louisiana when it slammed ashore on Aug. 29 and cut a path north through the state. While electricity is starting to be restored in some places, the vast majority of customers are still in the dark.

The storm also hit during one of the hottest times of the year, and with air conditioning out and food in refrigerators quickly rotting, many residents who hunkered down for the hurricane are deciding now to leave town.

While many have simply packed up their cars and hit the road to places such as neighboring Mississippi or Texas, others don’t have a car or enough gas to make the trip on their own. In Jefferson Parish, the local government set up a bus service to shuttle people who want to leave to shelters in northern Louisiana. New Orleans officials Friday announced a similar program.

Wanzie Patterson was one of dozens of people gathered at a recreation center in Marrero — a suburb of New Orleans — to board a bus headed to northern Louisiana. She was with her two kids and two other families who all lived at the same apartment complex in Kenner.

Their apartment suffered roof damage during the hurricane and then the electricity went out. They had tried to stay but without a car, they were walking long distances to get to the food and water distribution points and food was running low.

They were sleeping out on the porch to catch any cool breeze that wafted through but bugs were eating them alive. She was preparing to go “wherever this bus takes us.”

“I’m just thankful that we’re all OK. We have the help now. And from here everything else should get better,” she said. She’s been trying to help her two boys — ages 11 and 18 — understand that their ordeal is almost over, and is also preparing for the possibility of celebrating her youngest son’s birthday on Sept. 8 in a shelter: “I’m trying to keep a smile on his face.”

C.J. Conrady was also there with his mother and brother. His mother, who was in a wheelchair, had just gotten out of the hospital before the hurricane hit. He said she has incisions all the way up her back, and a pic line in her arm that is supposed to deliver antibiotics into her system fell out on Thursday.

She’s also diabetic and her insulin must be kept cold but they didn’t have a generator to run the refrigerator. Conrady’s younger brother is autistic, and Conrady is trying to keep him calm — a challenge considering all of the changes and stress the family has been going through.

“It’s been crazy. It’s been one thing after another,” said Conrady, who’s a computer engineering student at the University of New Orleans.

Following the hurricane, Glenn Spears couldn’t stay in his boiling hot apartment so the disabled army veteran and his brother drove from Terrytown, a suburb of New Orleans, to Kinder, Louisiana about 200 miles (320 kilometers) to the west — the closest available hotel room.

But when he realized that he might have to be out of his apartment for longer than anticipated, he called the parish’s information hotline to see what options he had and found out about the bus service. The downside was that he had to come back to catch the bus. So he and his brother left Kinder around 5 a.m. and made their way to the recreation center before heading north.