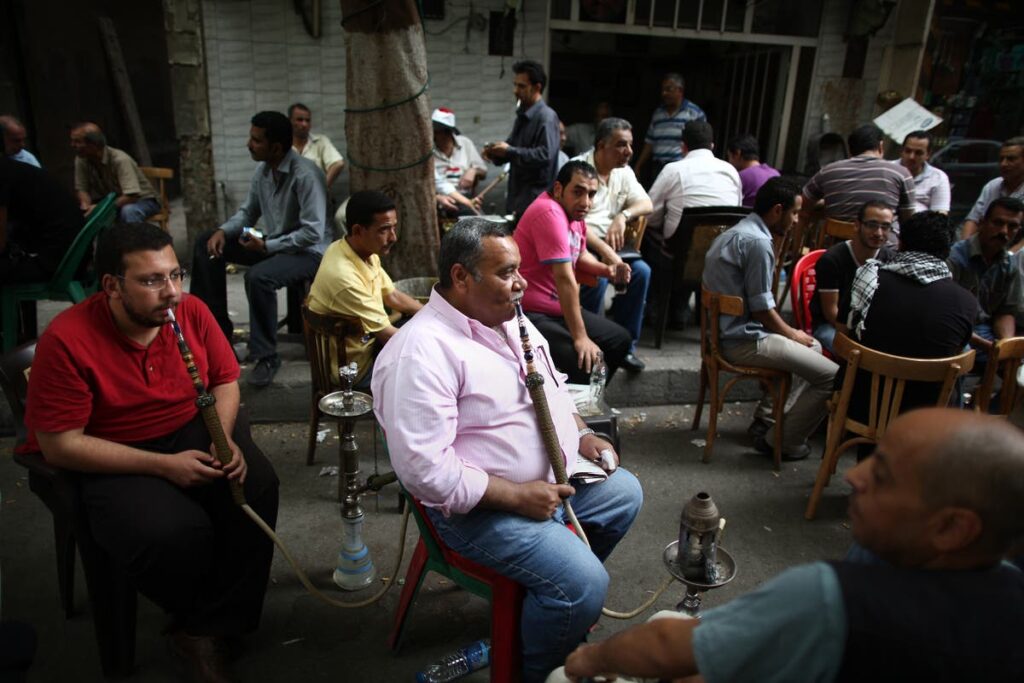 Maybe Yasser el-Fahl should have known better. But the stress was getting to be too much: the pandemic, his family cafe’s struggling finances, his seven-year-old son’s failing health.

So when he sat down in his ahwa, or cafe, to face another stack of mounting bills, he turned to what has always helped him relax: his shisha. This type of bubbling tobacco water pipe was once ubiquitous in Cairo’s countless cafes. But since last year, shishas have been banned in public to stem the spread of the coronavirus.

Just his luck: shortly after he took his first puffs, a police officer passed by the cafe door. Fahl spent the night in jail and was slapped with a fine of 4,000 Egyptian pounds – about £200.

Egypt is one of several countries in the Middle East, including Lebanon, Syria, the United Arab Emirates, Kuwait and Saudi Arabia, where shisha bans have been enforced during the pandemic. The popular pipes, also known as hookahs and narghiles, are often passed between friends, potentially transmitting the virus.

But while some other countries have gradually lifted restrictions, Egyptian authorities have maintained their crackdown. Photos published in state-run media depict the aftermath of raids, the pipes lined up in rows like criminals. This month, photos showed a bulldozer running over 76 shishas laid on a street in a city north of Cairo.

The moratorium has upset patrons who enjoy the historic pastime and cafe owners who rely on shisha for their income. Still, Cairenes in want of a smoke know there are still plenty of establishments flouting the ban and serving up the pipes.

Like several other men sitting nearby, Fareed is vaccinated against the coronavirus and entirely unconcerned about partaking in shisha despite the ban

When a talk-show host recently raised this on Egyptian television, Ministry of Local Development spokesman Khaled Kassem told him that campaigns against shisha “are ongoing” and said citizens can inform the government of violations via WhatsApp, Facebook or a hotline. “If you have a picture of shisha being operated in a certain place, share it with us and our forces will head out to deal with them immediately,” Kassem said.

For Fahl the hefty fine added to the financial burden he and his brother, Mohamed, say they already bear because they haven’t been able to serve shisha at their ahwa. This has lost the business about £100 a week for more than a year, they say, and taken a toll on the cafe’s traditional role.

“It’s a cultural salon,” says Mohamed. “There’s the doctor, there’s the engineer, all types of different people. And they’re all benefiting from each other, having discussions and talking to one another.”

An ahwa without shisha, he adds, “doesn’t mean anything at all”.

On a December morning at an ahwa in a Cairo neighbourhood, half a dozen men sit puffing away as a waiter hustles to pull coals from the fire with a pair of metal tongs, quickly refilling shisha trays before they go cold.

Yasser el-Fahl, left, and brother Mohamed sit outside their ahwa, or cafe. Yasser was jailed and fined for using his personal shisha in the cafe

The place was raided by police about seven months earlier, the waiter says, but the business retrieved the shishas unharmed and paid police to look the other way. The rescued pipes now sit on display inside, awaiting eager customers who dole out a few pounds per round.

“I don’t smoke cigarettes, but when I come to sit in an ahwa, I automatically order shisha,” says Fareed, whose last name has been withheld because his pastime is illegal. He sits alone, dressed in a brown suit, matching sweater, blue striped tie and gold aviator eyeglasses. A sugary Turkish coffee was propped on a stool beside him.

Like several other men sitting nearby, Fareed is vaccinated against the coronavirus and entirely unconcerned about partaking in shisha despite the ban. Each shisha is served with a new mouthpiece wrapped in plastic, helping to allay any concerns about catching the virus this way, he says.

Sitting just inside is Mohamed, who works at a factory that makes and exports shishas. He bookends his days smoking at the cafe.

“I’m not the owner, so I don’t care. It’s not the client’s issue,” he says, referring to the ban. Police shouldn’t blame customers “just because they came and were offered something”.

That some other cafes have managed to find ways around the ban frustrates the Fahl brothers – both as avid shisha connoisseurs and as businessmen.

Men play dominoes and smoke shisha at an ahwa

“What upsets me is that there are so many places using it,” Yasser says, speculating that “they pay to get away with it”.

Their ahwa, called Rouma el-Fahl, dates to 1880, when their great-grandmother Aziza ran it out of a nearby villa under the name el-Fahl el-Fallaheen, or el-Fahl the Peasants. In the 1950s, it moved across the street and eventually took on its new name after their father, Rouma.

The brothers grew up at the ahwa, relishing stories of their famous family matriarch, a neighbourhood legend who – as lore has it – lived to 110 years old. She oversaw daily operations at the ahwa, resisted the British occupation of Egypt and even trained local boys in weightlifting, the brothers say. Old black-and-white photos show her in old age, grinning beside happy patrons puffing on shisha.

The brothers had dreams that stretched beyond their neighbourhood in el-Darb el-Ahmar, a maze of winding streets. But when their father died of a stroke, he left the ahwa in their hands. They expanded in 2006, taking over the first floor of an old building. Their waiters learned to balance shisha and trays of mint tea and coffee while dodging stray cats and dogs in the alley that separates the two rooms.

Back then, they raked in about £15 a day on shisha alone. But early this year, after months without serving the pipes, the brothers fell behind on their bills. Mohamed was jailed for two nights in May for late payments, he says, and had to surrender his motorcycle as collateral for a loan.

“I could never imagine this would happen to me,” Mohamed says.

As Mohamed laments his fate, two men sit in rickety chairs at a nearby butcher’s shop, cups of tea set up between them. One, named Waleed, is puffing on his shisha, its long hose draped across his arm.

He is well aware of the ban on smoking. He too has already been stopped once before – in exactly the same spot where he is smoking now, he says – and charged the same hefty fine as Yasser for violating the rules.

But the butcher business is slow these days. He says he needs to do something to pass the time. Besides, he now knows to keep a better watch – and rushes to hide his pipe if he sees the police coming.