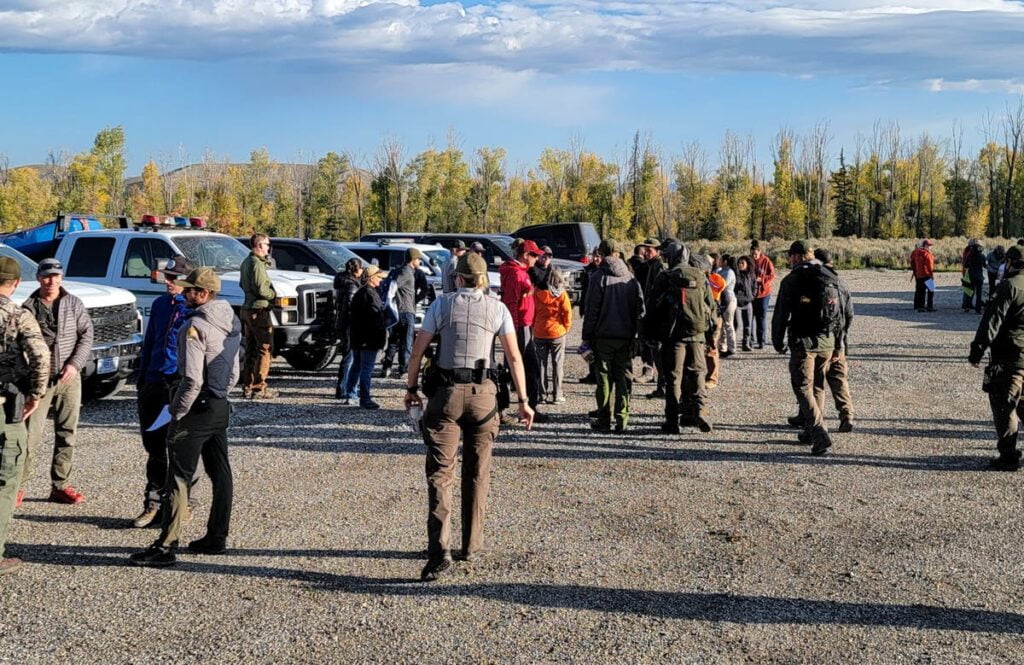 A team of FBI agents and park rangers have carried out a major search of a wild campsite believed to have been used by missing YouYuber Gabby Petito.

Several dozen officers from the FBI, the US Forest Service, Teton County Sheriff’s office and others, spent hours searching for clues at the site at Spread Creek Road, about 20 months of Jackson Hole, Wyoming.

Rangers from the National Park Service blocked the public and the media from entering the site, campers who had been using it were told to be gone by the time the search started on Saturday.

It added: “While we cannot comment further as to the specifics of this investigation, we will provide updates and request additional assistance from the public when appropriate to do so.”

Grand Teton National Park is vast and dramatic, a full 480 square miles. On Saturday, officers carried out their search under a sky that rapidly shifted from sun to storms.

Officials have said very little about the search or what they may have found. The National Park Service said the operation was being led by the Denver office of the FBI. That office did not immediately respond to inquiries.

Yet it appears the area, a so-called dispersal camping site which has no facilities appears to be considered for several reasons.

It is just a few miles from Jenny Lake, where a member of the public claims to have seen the white 2012 Ford Transit van that Ms Petito and her boyfriend were using for their cross-country trip, on 25 August.

It is possible that the couple may have stayed at the site. It has been widely reported that Ms Petito did tag numerous a number of potential campsites on an app called The Dyrt, among them this one.

It is also less than ten miles from where another visitor to the national park, Amanda Baker, said she and her boyfriend, gave a lift to Mr Laurie, who was hitch-hiking by himself on August 29.

In a series of TikTok videos Ms Baker, 22, said they had picked him up the public showers at Colter Bay Village, where he told them he had been wild campaign with his partner north on the Snake River.

“He approached us asking us for a ride because he needed to go to Jackson, [and] we were going to Jackson that night,” Ms Baker said.

“So I said ‘You know, hop in’, and he hopped in the back of my Jeep, we then proceeded to make small talk, but before he came in the car he offered to pay us like $200, to give him a ride, like 10 miles.

“So that was kind of weird. He then told us he’s been camping for multiple days without his fiancé, he did say he had a fiancé, and that she was working on their social media page back at their van.”

Ms Baker said she had provided her information to the police and the FBI, something officers at North Port Police Department in Florida confirmed.

As it was on Saturday, police in Florida were dong their own search, for Mr Laundrie, after it was revealed his family had said the had not seen him since Tuesday.

The Associated Press said police searched a vast Florida wildlife reserve on the 23-year-old, named a person of interest in the disappearance of his girlfriend. More than 50 North Port police officers, FBI agents and members of other law enforcement agencies searched the 24,000-acre Carlton Reserve in the Sarasota, Florida area of the Gulf Coast.

Police have repeatedly stressed they have no evidence a crime has been committed, and are treating Ms Petito’s case as that of a missing person.

In Wyoming most people seemed to be aware of the story of Ms Petito’s disappearance, though views and opinions ranged as to what had happened.

Ben Cole, who has been coming to the park for 30 years, was sitting close to the public showers at Colter Bay Village, from where Ms Baker said she and her boyfriend gave a ride to Mr Laundrie.

He said he thought something “fishy” had happened but was not sure what.

Craig Davies, who said he has been touring the country in a van for four years, was at a campsite close to the one the FBI had locked down.