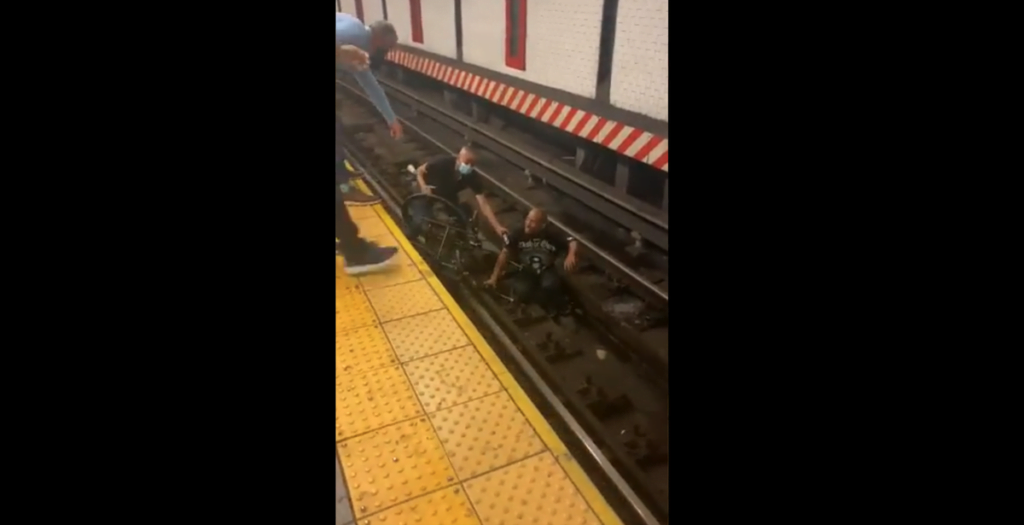 The moment a wheelchair user was saved after falling on to the subway tracks in New York City has been captured on video and shared online.

In the footage, a number of commuters band together to pull up the man who had ended up on the tracks at Union Square Station.

At first, one man jumps down to assist the man, who had fallen onto the railway lines alongside his wheelchair.

The good Samaritan grabs the wheelchair and puts it back on the platform. Afterwards, his attention is turned to the man who fell, and he leans over to pull him up. It is unclear how the man got onto the track.

While the man and others on the platform work to rescue him, there is an announcement on the tannoy about the incoming train, which is heard rumbling in the background as it nears the platform.

According to the video, there are roughly five people working together to get the man to safety.

The video ends with the camera positioning itself to show the train coming into the station seconds after the man managed to be pulled off the tracks.

The man was taken to Bellevue Hospital for treatment for his injuries, which were not believed to be life-threatening.

The identity of the man who fell has not been made public, but the video was filmed by Lauren Mennen, a CBS New York reporter. She witnessed the whole endeavour, which took place at roughly 1.15 pm on 4 August.

“One man jumped right into action. He didn’t think twice whether he was going to go on those tracks,” she told the news network.

“I was like, people need this. There’s heroes in action and I was like I’m going to wave my hand at the train and it will all be good. I hope people just take positivity away from all this,” Ms Mennen continued.

In the first five months of 2021, there have been 73 “collisions” on the transit network, according to data from The New York Police Department, seen by the New York Post.