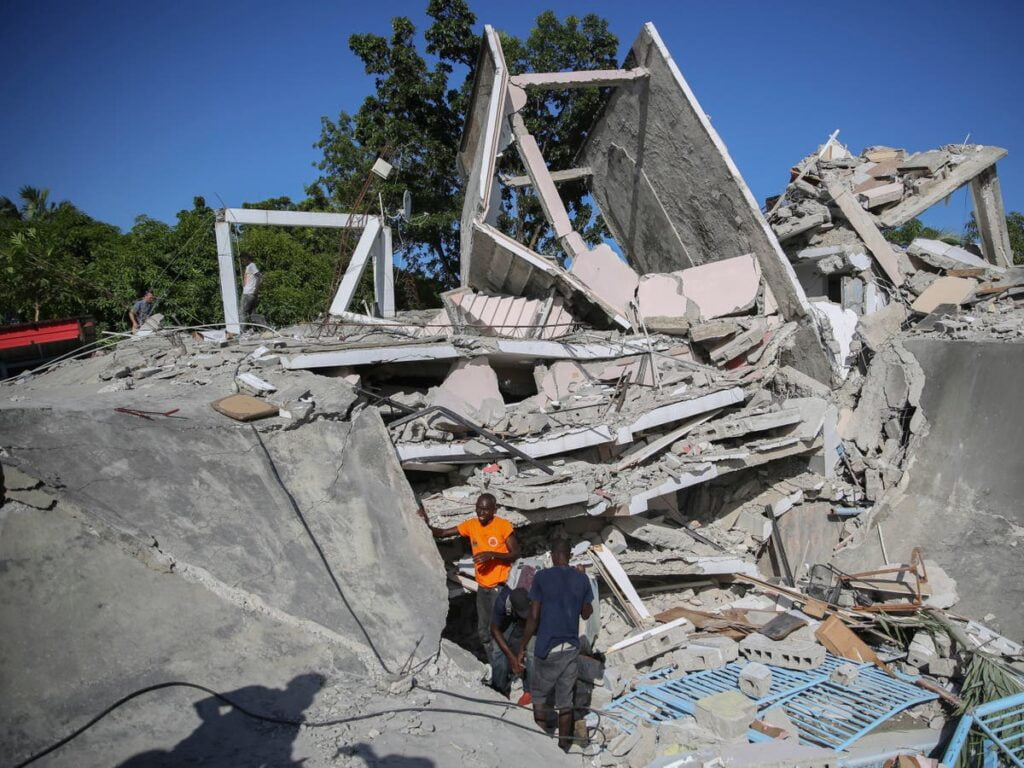 Moment woman and child rescued from rubble after Haiti quake

The search for survivors has begun in Haiti after a devastating 7.2-magnitude earthquake hit the country on Saturday, killing more than 300 people.

Officials registered at least 304 fatalities and more than 1,800 people injured from the quake on Saturday evening, as they assessed the extensive damage to homes and buildings.

The quake comes over a decade after a disastrous 7.0-magnitude shock in 2010 that struck closer to the country’s capital of Port-au-Prince, killing an estimated 220,000 people.

Ariel Henry, the country’s prime minister, said on Saturday that local hospitals, particularly in the city of Les Cayes, were “overwhelmed with wounded, fractured people”.

“The needs are enormous. We must take care of the injured and fractured, but also provide food, aid, temporary shelter and psychological support,” Mr Henry added.

Haitian officials have been working overnight as the search for survivors begins following yesterday’s devastating earthquake that has already killed more than 300 people.

On top of the fatalities, churches, hotels, hospitals and schools have also been badly damaged or destroyed by the 7.2-magnitude quake this weekend.

You can find more details on the aftermath of the shock below:

You can see below the moment when a woman and child were rescued from the rubble in Haiti following Saturday’s earthquake:

Moment woman and child rescued from rubble after Haiti quake

US president Joe Biden has said his administration will offer support to Haiti as part of efforts to recover survivors:

Shock will ‘bring back trauma’ from 2010 earthquake, ActionAid says

The earthquake in Haiti on Saturday will have “brought back the trauma” of the 2010 shock that killed tens of thousands of people in the country, ActionAid has warned.

The international poverty charity said on Sunday that emergency teams were assessing urgent needs and preparing to respond to the natural disaster.

“Today brings back the trauma of the 2010 earthquake that tore Haiti apart. This deadly quake has destroyed homes and infrastructure in some of Haiti’s most vulnerable and marginalised communities,” Angeline Annesteus, country director of ActionAid Haiti, said.

“In Jérémie, one of the areas most affected, our team is helping with rescue efforts as families desperately try to pull loved ones from the rubble. Sadly, we expect the death toll to continue to rise.

“We are assessing what people need most urgently and preparing to respond by providing food, temporary shelter and essential items such as blankets and hygiene kits for women and girls.”

“The devastating fallout from this earthquake, could push many more families into poverty and hunger.”

More than 300 people have been killed after a 7.2-magnitude earthquake struck Haiti, just days before a tropical storm is expected to make landfall on the island.

The US Geographical Survey has issued a “red alert” for the disaster, warning that fatalities could stretch into the thousands with extensive damage expected.

Our reporters, Chiara Giordano and Sabrina Johnson, have the full story below:

Hello and welcome to The Independent’s live coverage of the aftermath from yesterday’s earthquake in Haiti.