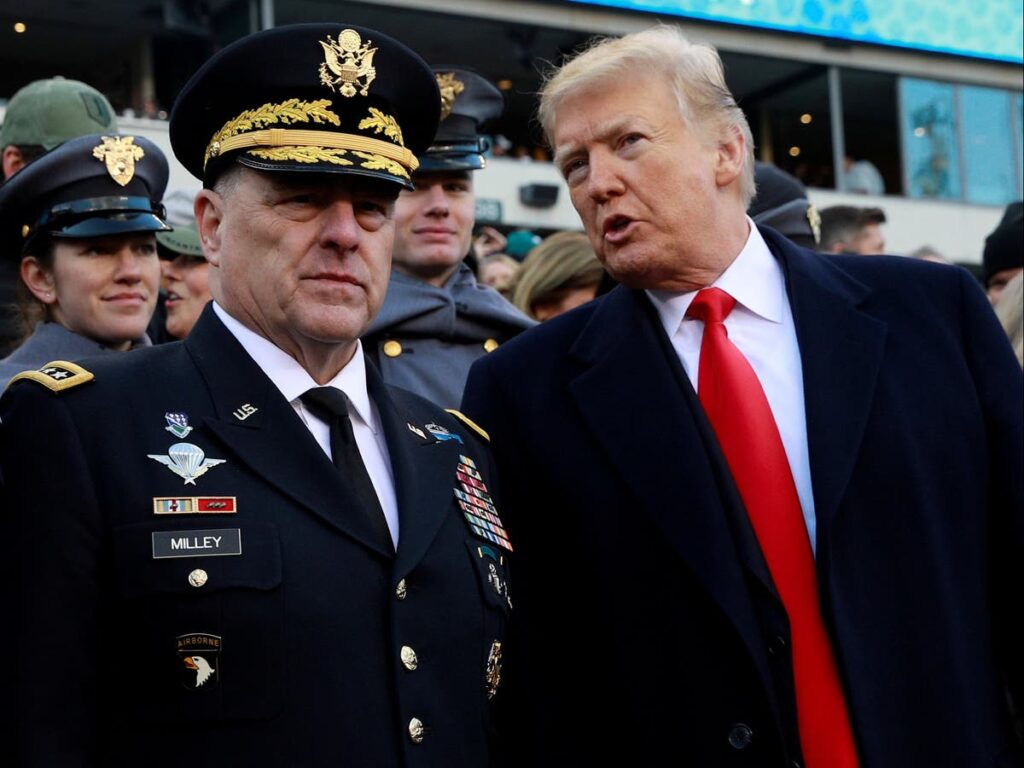 Both sides of America’s political divide have called on Gen Mark Milley to resign amid accusations that he “broke the chain of command” by assuring Beijing that Washington would not wage war against China in Donald Trump’s final two months in office.

As revealed by “Peril”, an upcoming book by Watergate reporter Bob Woodward and his Washington Post colleague Robert Costa, the US Chief of Staff called his Chinese counterpart Gen Li Zuocheng to avert war with the United States — amid fears that Beijing was concerned about an attack.

Alexander Vindman, a former member of the US Security Council and a retired US Army lieutenant colonel, was among the figures to call for Gen Milley’s resignation following reports of his conversations with China on Tuesday.

“If this is true Gen Milley must resign,” Mr Vindman wrote on Twitter. “He usurped civilian authority, broke chain of command, and violated the sacrosanct principle of civilian control over the military. It’s an extremely dangerous precedent. You can’t simply walk away from that.”

Rand Paul, a Republican senator for Kentucky, agreed with Mr Vindman and wrote on Twitter: “I don’t care what you think of President Trump, the Chairman of the Joint Chief of Staff working to subvert the military chain of command and collude with China is exactly what we do not accept from military leaders in our country. He should be court martialed if true.”

According to Woodward and Costa, Gen Milley called Gen Li twice with assurances that “the American government is stable and everything is going to be okay,” and that Washington was “not going to attack or conduct any kinetic operations against you”.

Two calls — which occurred both before and after the Capitol riot on 6 January — also saw Gen Li receive assurances that he would be warned before any attack. According to The Post, Gen Milley told him that:“If we’re going to attack, I’m going to call you ahead of time. It’s not going to be a surprise”.

California Democrat Ted Lieu was also among those criticising Gen Milley on Tuesday, and wrote on Twitter: “The fate of the world should not depend on a single general, in this case Mark Milley, trying to stop a President who is unstable.”

“That’s why we need to pass my bill with senator Ed Markey that requires POTUS to get congressional authorisation before launching a nuclear first strike”.

Mr Trump, responding to reports of Gen Milley’s calls with China, told Newsmax on Tuesday that “if it is actually true, which is hard to believe that he would have called China and done these things and was willing to advise them of an attack or in advance of an attack…that’s treason”.