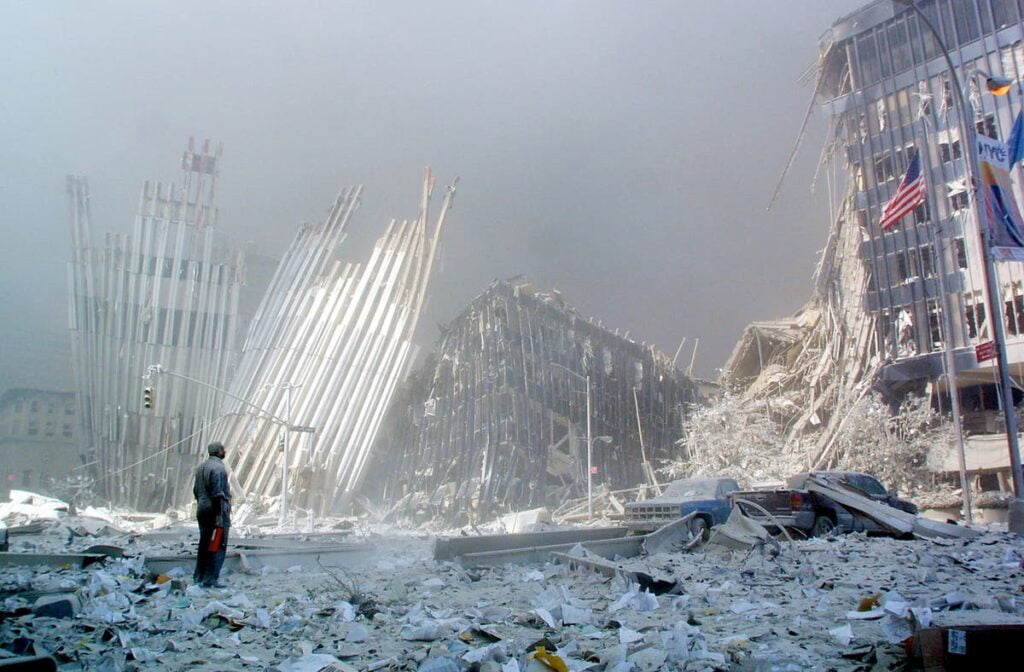 China is waging a “war on terror”– against members of its own Uyghur minority. In Turkey, rebellious Kurds, or even those who speak out on their behalf, are charged in courts as terrorists.

Egypt describes its campaign of attacks on residents and militants of the Sinai peninsula as a “war against terrorism”. And even regimes that have been labelled terrorist supporters, such as Syria and Iran, cast their battle against armed opposition groups as part of a broader global fight against terrorism.

In the west, policymakers and politicians now refrain from speaking about the “global war on terror”, a cumbersome phrase coined just after the 11 September attacks 20 years ago this week. The mistakes, excesses, violence and blowback of the war on terror have prompted reflection and restraint.

But for regimes across the world – especially authoritarian governments of various ideologies – the narrative of an all-encompassing war on terror has become a remarkably useful tool to suppress enemies, stifle dissent, and excuse abuses of power.

“It’s not just regimes aligned with the US, such as the United Arab Emirates, Saudi Arabia and Egypt, but also regimes using this pretext to challenge the US, such as Iran and Syria,” says Elizabeth Tsurkov, a fellow at the New Lines Institute in Washington. “They constantly refer to their war on terror. It’s really a genie that has been unleashed out of the bottle and is now being used to brand opponents by authoritarian governments everywhere.”

From Moscow to Riyadh, from Manila to Rabat, from Bogota to Benghazi, strongmen have adopted the epic tale of a grand war against an unfathomable evil, as bequeathed to them by George W Bush and his deputies after 11 September. They lump in their enemies with global terrorism networks as an excuse to wipe them out, as well as perhaps to gain some other advantages by ramping up surveillance, quashing noisy outliers and enforcing conformity.

When western diplomats or human rights advocates speak out against abuses, autocratic regimes harrumph in contempt.

How dare the west, goes the argument, criticise Turkey, Syria, China and Russia for using methods against those they consider violent terrorists, when the US and its allies launched a brutal no-holds-barred global fight against those behind the 11 September attacks? How can those behind the rendition of al-Qaeda suspects to black sites, the graphically documented torture of Iraqi prisoners in Abu Ghraib prison, and drone strikes on Afghan weddings complain of abuse?

Chinese authorities have defended the camps they use to detain ethnic Uyghurs as being no different from the Guantanamo Bay facility used by Americans to warehouse suspected Islamic militants.

Defenders of the Kremlin have excused the Russian bombing of Syrian hospitals as being no different from the attacks by Americans on medical facilities in Afghanistan. Arab autocrats have crushed popular uprisings by smearing them as attempts by Islamist terrorists to take control.

The greatest legacy of 11 September may be to have allowed governments to counter every challenge to their authority by deploying police, soldiers, spies, prisons, guns and bombs.

Even before 9/11, governments fought nasty little battles against Islamist militants or others they derided as terrorists. But the US and the west saw the 11 September attacks as justifying new levels of security. Over the past 20 years, new technologies have emerged that allow better, more thorough surveillance and control.

“There is an illusion that pre-September 11 everything was hunky dory, and that’s simply not the case,” says HA Hellyer, a Middle East security specialist at the Royal United Services Institute. “But once 9/11 takes place, terrorism becomes a much more prominent trump card. Terrorism means that we can suspend normal, usual ways of doing things.”

Meanwhile, terrorist attacks worldwide have not abated, though they are overwhelmingly concentrated in the Middle East, south Asia, and Africa. Numbers of incidents worldwide remain steady, according to statistical compilations, peaking at about 14,000 during the heyday of Isis and simmering down to about 7,000 or 8,000 a year in recent years.

Attacks may be down in the west, but they are up in sub-Saharan Africa. The locations of spectacular attacks have expanded. And there is little evidence that the virulent ideologies that draw recruits are losing their appeal. Militant groups grow, mutate, merge and move, and it is questionable whether, and if so how, counterterrorism measures undertaken by governments affect them.

In fact, the 11 September attacks and the subsequent US response gave vast encouragement to extremist Islamic groups, even if their ability to operate in the west has become more limited.

On that day, would-be militants learned that a couple of guys with box-cutters on a civilian aircraft could have a world-changing impact. In subsequent years, they learned that the greatest superpower in world history was often a bumbling oaf, unable to decisively defeat farmers and shepherds armed with rusty guns in Anbar or the valleys of Helmand.

“The act of September 11 itself definitely gave a lot of encouragement to terrorist groups,” says Zaid al-Ali, a former UN adviser in Iraq and a constitutional scholar at IDEA, the UN’s democracy-building branch. “But the rise of these groups is also linked to the US reaction. When the US invaded Iraq in 2003, it really pissed off a lot of people who didn’t see that invasion as justified in any way and gravitated toward armed action.”

Both al-Qaeda and its offshoot Isis remain potent organisations worldwide, and far more visible than they were 20 years ago. Much of that is a result of US military missteps, which both encouraged recruits to fight and gave them the space to organise in the ungoverned terrain of Iraq, which became the wellspring of militant groups worldwide after al-Qaeda was run out of Afghanistan.

“The state the US established in Iraq didn’t control the territory,” says Ali. “There were big pockets of territory that these groups used to arm themselves, train and regroup. A lot of these groups started theorising and coming up with what to do next.”

Two decades of invasion, drone strikes and renditions have had mixed results in terms of security improvements. But there is one realm in which the war on terror has had an unquestionable impact.

People are less free and more spied on, perhaps more than at any point in human history. Across the world, governments have more regularly imposed emergency laws that suspend rights and liberties while giving law enforcement extraordinary powers – all in the name of combatting terrorism.

The state of emergency has become the rule

Electronic communications are surveilled, with or without court orders or probable cause. Security cameras, often equipped with facial recognition software, have been installed across cities. Phone calls are recorded en masse.

A grim essay by the Norwegian scholar Thomas Hegghammer in the journal Foreign Affairs paints a picture of how well-resourced states have been able to increase electronic surveillance in the name of fighting terorrism.

“In the wake of the 9/11 attacks, commentators often portrayed the governments of such states as lethargic bureaucracies outwitted by light-footed rebels,” he writes, “As the years went on, however, what emerged instead were dynamic technocracies blessed with deep pockets and highly trained investigators and operatives. For every $1 in Isis’s coffers, there are at least $10,000 in the US central bank. For every al-Qaeda bomb maker, there are a thousand MIT-trained engineers.”

Hegghammer’s essay describes how it is nearly impossible for anyone to set up, say, a secret militant training camp, or organise a plot to overthrow a government in the west, just because nearly every square inch of these societies is monitored. He describes such an intensive level of surveillance as a dangerous and dystopian development that the war on terror has brought about, with each attack from 11 September on justifying further encroachments by governments.

“The state of emergency has become the rule,” says Tara Varma, Paris director of the European Council on Foreign Relations. “These moments that are supposed to be unique and temporary are part of our life now. The exceptions of the war on terror were so dramatic because we were sure we were going to win it. But today it’s clear we’ve not won it at all.”