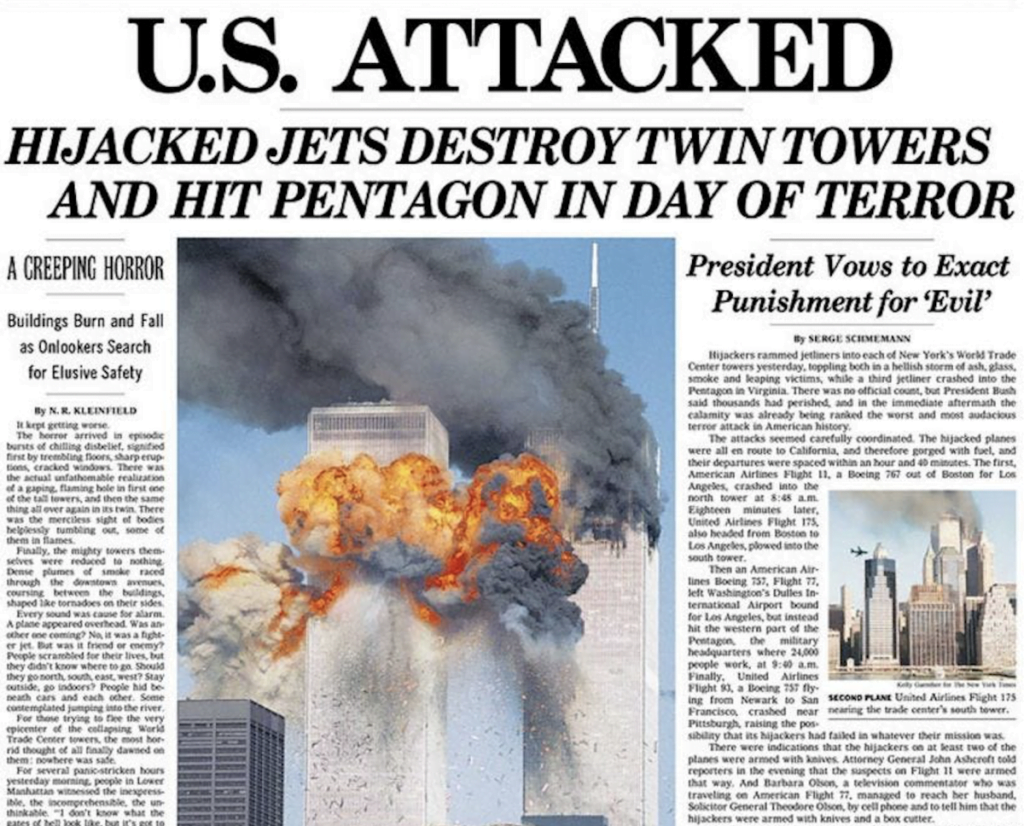 On 12 September, 2001, the world was reeling in shock. The day before, al-Qaeda terrorists had hijacked commercial planes and crashed them into the World Trade Center and the Pentagon, killing 2,977 people. Americans were gripped with grief for the dead and fear of a potential next attack. The United States’ image of invincibility had been shattered. People of all nations were stunned.

Around the globe, newspapers struggled to capture the full scope of the tragedy on their front pages. Twenty years later, they provide a glimpse of the world’s first reactions to that day of horror.

The New York Times put the burning Twin Towers front and center on its cover, calling 9/11 a “DAY OF TERROR.”

USA Today called the terrorism an “Act of War”, foreshadowing the quagmires to come in Afghanistan and Iraq.

San Francisco’s The Examiner emphasised the rage many Americans felt at the terrorists, captioning its front page simply, “B******S!”

The Independent, still a print newspaper at that point, headlined a grim picture of the Twin Towers in flames and smoke with the words, “Doomsday America”.

The Independent’s front page on 12 September, 2001

he Times of London took a simple but affecting approach with its front page. Using the full width of its wraparound cover, the newspaper showed a panoramic shot of Lower Manhattan enveloped in smoke after the first tower fell. The headline was simply the date and time: “10:02am, September 11, 2001”.

Like other papers, Britain’s The Daily Telegraph saw the attacks through the lens of conventional warfare, calling them “War on America”.

The Guardian used the same photo and a similar headline: “A declaration of war”.

Canada’s The Globe and Mail alluded to the 1941 Japanese bombing of Pearl Harbor, which President Franklin Roosevelt called “a date which will live in infamy”. The bombing had been the deadliest foreign attack on American soil in history – until 9/11.

(The Globe and Mail)

In Australia, the Herald Sun included a disturbing inset photo of two of the Americans who jumped from the Twin Towers as they burned. Its headline, below a larger photo of the explosions, was “AMERICA ATTACKED”.

The front page of Melbourne, Australia newspaper the Herald Sun on 12 September, 2001