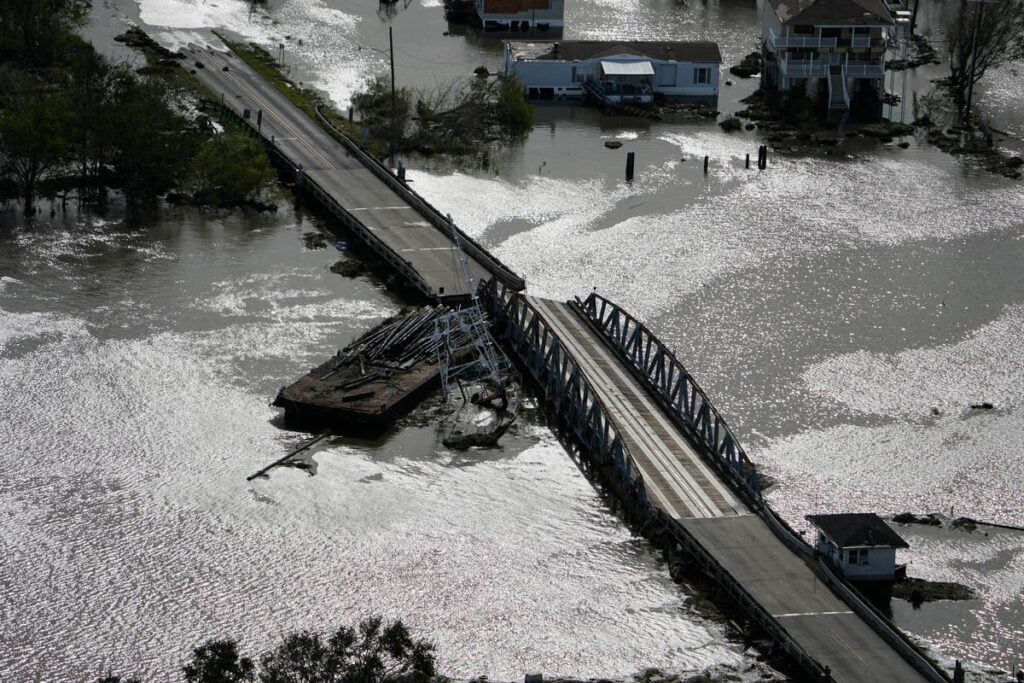 Hurricane Ida, which hit the American gulf coast on Sunday, has left two people dead and a million others without power.

Another person is feared to have died in Louisiana after he was attacked by an alligator swimming in floodwater near his home. Two more people died after a highway collapsed in the state of Mississippi as a result of the storm.

Widespread flooding has seen homes evacuated, businesses shut down, and almost all buildings in Louisiana left without power.

Hurricane Ida was the fifth-strongest storm to ever hit mainland United States. It was downgraded to a tropical storm on Monday after 16 hours.

However, the National Hurricane Centre also warned that dangerous storm surges, damaging winds, and flash flooding would continue over portions of southeastern Louisiana and southern Mississippi.

President Joe Biden declared the storm – which is heading towards Tennessee and Ohio – a “major disaster.”

Louisiana’s governor John Bel Edwards said that, “if you had to draw up the worst possible path for a hurricane in Louisiana, it would be something very, very close to what we’re seeing”.

He warned that the death toll is expected to rise “considerably” and said recovery from the storm could take months.

The storm also came on the 16th anniversary of Hurricane Katrina, which devastated the region in 2005.

That’s it for today’s liveblog on Hurricane Ida. Thanks for following.

Good morning and welcome to The Independent’s rolling coverage of Hurricane Ida, which is due to make landfall on Tuesday.

The US Environmental Protection Agency (EPA) issued emergency fuel waivers for Louisiana and Mississippi, effective immediately, due to Hurricane Ida.

The agency said: “EPA issued a waiver of the Reid Vapor Pressure (RVP) requirements in Louisiana and Mississippi to help improve the fuel supply circumstances caused by Hurricane Ida.

EPA, working with the Department of Energy, addresses fuel supply disruptions caused infrastructure damage as the result of a hurricane by issuing emergency waivers of certain fuel standards in affected areas, the EPA says on its website.

These temporary waivers help ensure that an adequate supply of fuel is available, it adds.

Ida, one of the most powerful hurricanes ever to hit the US Gulf Coast, knocked out power to more than 1 million homes in Louisiana on Monday and prompted rescue operations in flooded communities around New Orleans.

All flights from and to New Orleans on Tuesday have been cancelled, the airport authority announced on Twitter, as Ida now becomes a tropical depression after wreaking havoc in the gulf area for two days.

The cancellations also extend to Wednesday for over 197 flights, as authorities request travellers to check the status of their flights before heading for the airport.

Man who lost ‘everything’ in plea for help

Theophilus Charles, 70, said that he has lost “everything” after the hurricane destroyed his house in Louisiana.

“I ain’t got a dry spot in the house,” he said. “My roof fell, I lost all my clothes, my furniture, my appliances, everything.”

Mr Charles told Reuters news agency: “I was born here. We went through all the major hurricanes here. So I figure, I’ll stay here and ride this one out.”

He said that he was in his front room when he saw the roof get blown off and felt the whole house shaking.

Mr Charles added: “I need help. If anyone out there can help me, please do. Because I ain’t got nowhere and I lost everything that I had. And there’s nothing I can do with this … You can’t simply repair this.”

Hurricane Ida to spread to Tennessee and Ohio

Hurricane Ida, which has been downgraded to a “tropical depression” will spread across parts of Tennessee and Ohio Valley today, according to the National Hurricane Center.

A man, 71, in Slidell, Louisiana, is presumed dead after he was attacked by an alligator swimming in floodwaters.

His wife had said that he was walking in the floodwaters close to their home when the large alligator had attacked him and tore his arm off, according to the St. Tammany Parish Sheriff’s Office.

She said she pulled him to safety on to some steps and then went to get her boat but, when she returned, he was not there.

She was unable to call emergency services as the telephone network was down.

The sheriff’s office used boats and high-water vehicles to search for the man but have not found him. The incident is under investigation.

It said in a statement that wildlife could have been forced closer to residential areas by the storm, and urged people to be cautious.

Two people are confirmed to have died as a result of Hurricane Ida.

A man drowned after attempting to drive through floodwater that filled a dip under a bridge, near Interstate 10 and West End Boulevard in New Orleans, on Sunday night.

On the same night, a man died after a tree fell on a home in Prairieville, Baton Rouge.

Weather forecasters are warning that the northeastern US states could see heavy rain as Hurricane Ida moves north.

Parts of Pennsylvania, Virginia, West Virginia, Maryland, and New York are expected to see four to 10 inches of rain this week.

Massachusetts is expecting to see “very heavy rainfall” as a result of the hurricane, which has been downgraded to a “tropical depression”.

Three to four inches of rain is forecast for large parts of the state on Wednesday night and Thursday.

National Weather Service Boston said it could pose a risk of “significant floods”.

It said: “While the axis of heaviest rain is uncertain, the potential exists for a narrow swath of very significant flooding.”

At least two people have diedAnother man is feared to be dead after alligator attack in floodwaterMore than 1 million homes in Louisiana are without powerHurricane downgraded to tropical depression warningStorm heading to Tennessee and Ohio today and central Appalachians on WednesdayIda generates tornadoes in neighbouring AlabamaHeavy rain expected to fall on northeastern states, with risk of flooding in some partsBiden said more than 5,000 National Guard members have been deployed to LouisianaMore than 2,200 evacuees were staying in 41 shelters as of Monday morningResidents are expected to move to hotels as soon as possible to limit spread of CovidHospitals report extensive damage to buildings and infrastructureEmergency fuel waivers issued for Louisiana and MississippiNew Orleans airport cancels all inbound and outbound flights