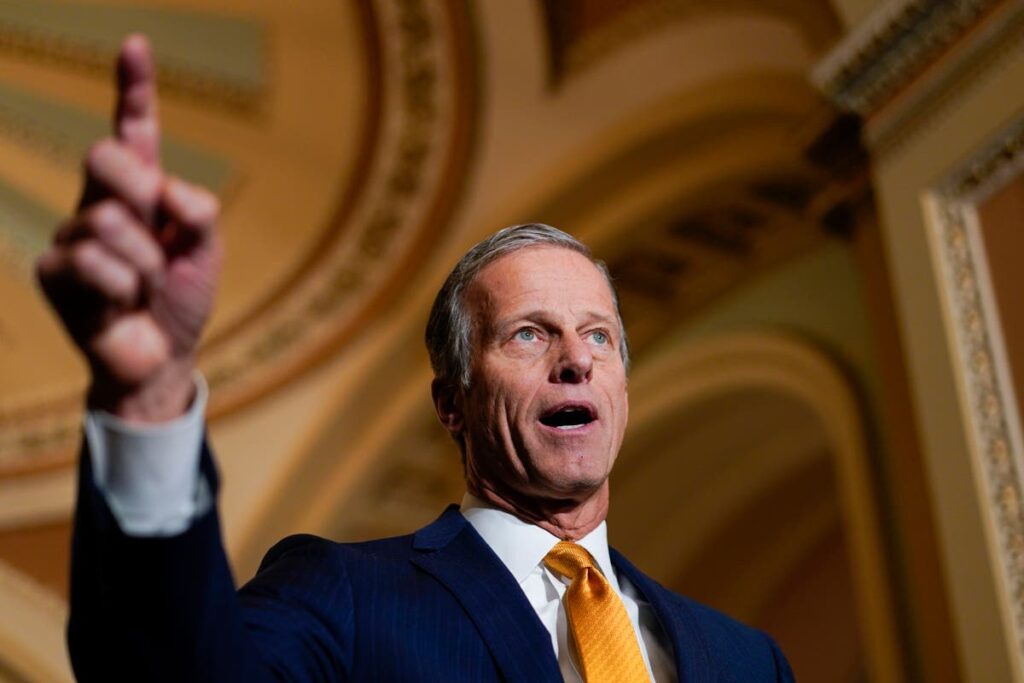 The No. 2 Senate Republican made a clear effort to distance himself from former President Donald Trump this week, the latest step in driving a wedge further between Republican leaders in the upper chamber and their former party boss.

South Dakota Senator John Thune made the comments in an interview with Fox News, the conservative network which remains a steadfast ally of Mr Trump while simultaneously appearing to blacklist those of his supporters who are eager to spread lies about the 2020 election.

In the interview, Mr Thune did not directly challenge the former president’s election lies but instead suggested that the overall focus on Mr Trump’s defeat was not helpful for Republicans as they sought to retake the House and Senate this year.

“President Trump still has a tremendous following among our supporters across the country and, you know, exercises that influence, or at least attempts to, on a daily basis,” he said.

“But I think ultimately for us as Republican senators our job right now is to try to get the majority back in 2022 and provide that check and balance against this crazy Biden administration agenda,” the senator said.

He then added: “I think any time we’re talking about the 2020 election and rehashing that, it takes our eyes off the ultimate prize.

“And so I think most Republican senators understand that in order for us to be successful as a country that we have to get the majority back in the Senate and that means focusing on the future not the past.”

Mr Thune’s comments are an example of the kind that have enraged Trump loyalists since the moment he was declared the election loser in November 2020. While some GOP members have publicly backed Mr Trump, other Republicans seem simply unwilling to challenge the ex-president on the issue of whether the 2020 election was fraudulent.

The South Dakota Republican currently serves as the minority whip in the Senate, second-in-command of the GOP caucus only behind Minority Leader Mitch McConnell. In that role, he is one of the minority leader’s closest allies. Mr Thune can often be relied upon to enunciate the future ambitions of the Republican Party’s establishment thanks to the tendency of power to shift far less frequently between various factions of the two parties in the upper chamber.

Some Republicans, like Mr Thune, have been unwilling to support Mr Trump’s efforts to overturn the election, allowing them to escape accusations from Democrats of complicity in the effort to denigrate US democracy.

Senator Thune’s comments this week were slightly more measured than those of his ally, fellow South Dakota Senator Mike Rounds, who has also sought to publicly distance himself from Mr Trump.

Mr Rounds went as far as saying that Mr Trump was spreading falsehoods about his defeat.

“We simply did not win the election, as Republicans, for the presidency,” Mr Rounds told ABC News, igniting a feud with Mr Trump that would last much of the week.

“[I]f we simply look back and tell our people don’t vote because there’s cheating going on, then we’re going to put ourselves in a huge disadvantage,” Mr Rounds continued.

“[L]et’s focus on what it takes to win those elections. We can do that. But we have to let people know that they can — they can believe and they can have confidence that those elections are fair.”

Mr Trump returned fire in the form of a statement from his office.

“The Radical Left Democrats and RINOS, like ‘Senator’ Mike Rounds, do not make it easy for our Country to succeed. He is a weak and ineffective leader, and I hereby firmly pledge that he will never receive my Endorsement again!” it declared.

The former president has yet to comment on Mr Thune’s remarks to Fox News.

On Saturday Mr Trump was in Arizona for a campaign-style rally alongside a cast of election conspiracists including state party chair Kelli Ward and MyPillow CEO Mike Lindell – who is facing a $1.billion defamation suit from Dominion Voting Systems, an electoral technology company.

At the rally, Mr Trump repeated his lies about 2020 and accused many Republicans of obstructing his efforts to overturn his defeat.