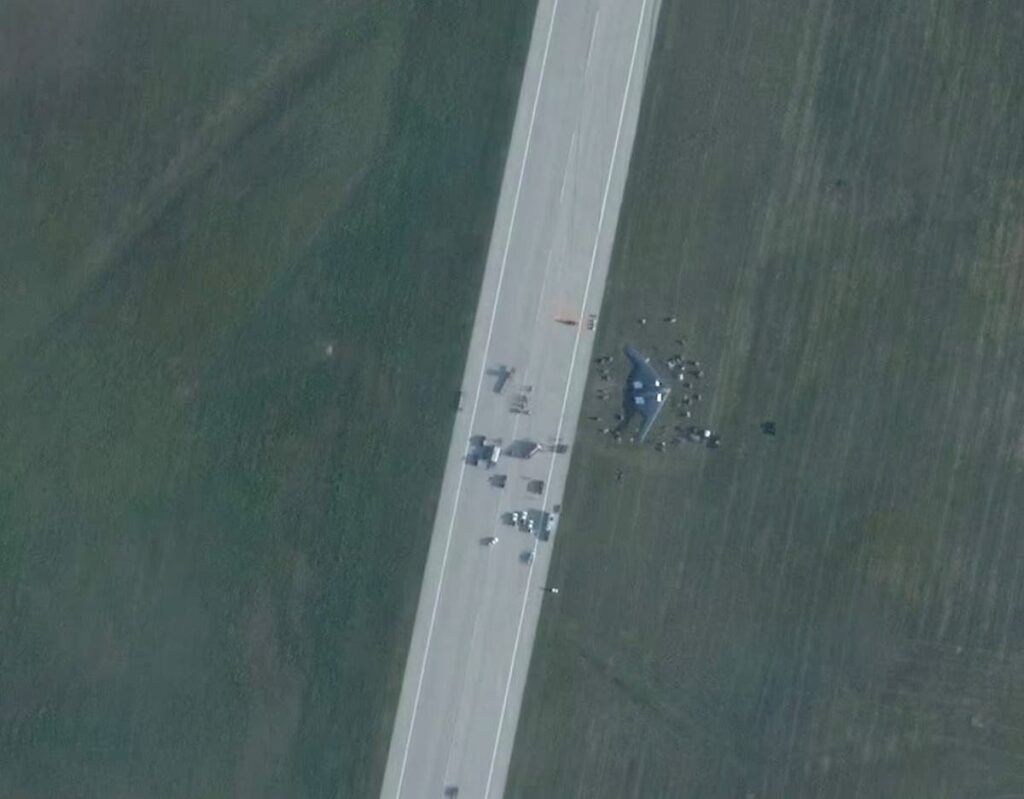 Satellite images have shown the B-2 bomber that crash-landed at the Whiteman Air Force Base in Missouri on Tuesday.

At $2bn, the plane is one of the US military’s most expensive and dangerous weapons.

The crash landing occurred at around 12.30am on Tuesday when the plane was out on a routine training mission and experienced an “in-flight malfunction,” according to Air Force spokesperson Jennifer Greene, KMBC 9 News reported.

The Daily Mail reported that the plane had a hydraulic failure and that its port main landing gear collapsed as the plane was about to come in for landing – leading to the B-2 going off the runway and its wing going into the ground. This version of events hasn’t been confirmed by the Air Force, but satellite images from Planet Labs Inc show the plane on the ground just off to the side of the runway with its wing in the ground.

No injuries or fires have been reported. The Federal Aviation Administration set up a temporary flight restriction area with a six-mile radius and 8,000 feet [2,438 metres] into the sky “to provide a safe environment for an accident investigation”. The restriction will end at 8pm on Friday.

Out of the 21 B-2 bombers ever made, 20 remain following a crash in Guam in 2008. KMBC reported that the Missouri B-2 has been stationed at the base since 1993. It’s unclear how damaged the plane was in the crash landing.

A number of B-2 planes from the Whiteman base joined up with the Norwegian government for a successful operation and were deployed on a mission to Iceland and the UK earlier this year.

The commander of United States Air Forces in Europe and Air Forces Africa, General Jeffrey Harrigian, said that the August deployment “demonstrates the value of our continued presence and relationships,” added that “what our collective Airmen accomplish on these missions is vital to our alliance and maintaining agility as we move into the future”.

The Drive reported that materials used to make the B-2 could become toxic during an accident. The stealth bomber can carry both nuclear and conventional weapons.

In the 2008 Guam crash, the two pilots survived and the plane wasn’t carrying any ammunition. Until the end of an investigation, the remaining 20 B-2 bombers were grounded for two months following the failed take-off.

The investigation discovered that heavy rains had damaged the sensors that calculate speed and altitude.

The model was developed during the presidency of Jimmy Carter in the late 1970s.

The Independent has reached out to the Air Force for comment.