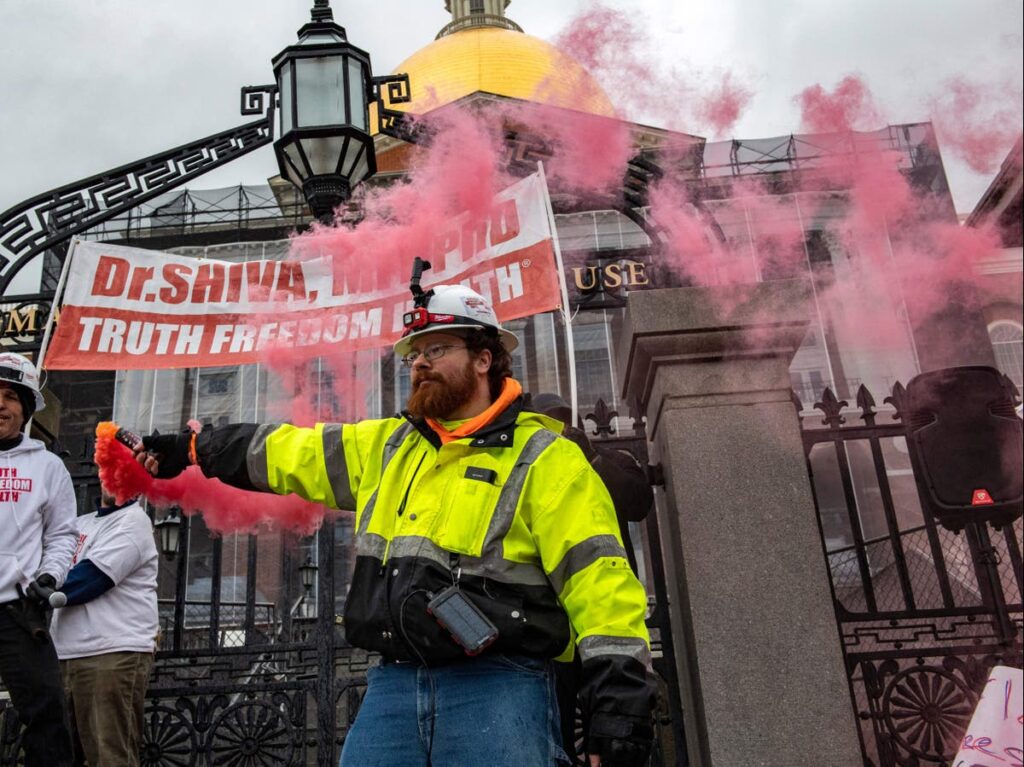 Authorities and businesses in Washington DC are beefing up their security operations ahead of a major anti-vaccine mandate protest.

Law enforcement agencies are worried that the potentially large demonstrations against vaccine mandates could attract members of extremist groups.

The Federal Bureau of Investigation, Department of Homeland Security, Metropolitan Police Department, US Park Police and others have made plans ahead of this weekend, CNN reported.

The Metropolitan Police spoke to business leaders in the capital, telling them that the authorities will be out in force ready to arrest those who may refuse to leave a private business.

Restaurants, bars, gyms, and some other private businesses in DC are now required to ask their customers to show proof of vaccination before allowing them inside, with exceptions having been made for grocery stores and other retail businesses.

US Capitol Police has switched up to full staffing this weekend and they’re being supported by the Montgomery County Police Department in Maryland.

“I am confident in our preparation for this weekend,” US Capitol Police Chief Tom Manger told CNN. He added that the agency is particularly monitoring the “Defeat the Mandates: An American Homecoming” protest that’s planned to take place on the National Mall on Sunday. The event is meant to gather people who oppose vaccine mandates, vaccines for children, and other pandemic requirements and restrictions.

The permit filed with the National Park Service states that the event could attract as many as 20,000 people, starting on Sunday morning at the Washington Monument and ending in the afternoon at the Lincoln Memorial.

The event website states that anti-vaxxers Robert Kennedy Jr and Lara Logan, a former 60 Minutes correspondent and Fox contributor, are among those set to speak.

“Refuse Fascism” protesters demonstrated for abortion rights outside the Supreme Court on Saturday, with the National Pro-Life Summit also taking place in Washington on the same day, featuring former Vice President Mike Pence as one of the speakers.

The anti-abortion March for Life occurred on Friday, with about 30 men who appeared to be connected to the nationalist White supremacist group Patriot Front attending, prompting a large presence from law enforcement.

People attend the March for Life rally on the National Mall in Washington, Friday, Jan. 21, 2022. The March for Life, for decades an annual protest against abortion, arrives this year as the Supreme Court has indicated it will allow states to impose tighter restrictions on abortion with a ruling in the coming months. (AP Photo/Susan Walsh)

Capitol Police officers have been notified that the weekend could turn violent and that the White House could be a target.

DHS told CNN that they don’t have any information “indicating any specific, credible threats related to the events occurring … this weekend in the national capital region”.

But they added that “the United States is in a period of heightened threat,” noting that both domestic and foreign extremists remain as possible threats.

Federal law enforcement added that the demonstrations focus on issues that are heavily affected by disinformation from domestic and foreign sources.

No credible specific calls for violence have been made, but problematic online chatter, such as the perceived ineffectiveness of nonviolent action and speculations that the demonstrations are being organised by the authorities to arrest attendees, has been detected.

An official told CNN that the demonstrations could lead to clashes with counter-protesters. “The objective is to make sure that those who are coming to the District to engage in constitutionally protected events can do so in a safe manner,” they said.

The anti-vaccine group Children’s Health Defense, whose chairman is Robert F Kennedy Jr, is organising “Defeat the Mandates”. The organisation has been identified as one of the largest sources of misinformation about vaccines.

Director of media relations for the group, Rita Shreffler, told CNN that they are committed to nonviolence and called vaccine mandates “government sponsored violence”.

“Defeat the Mandates” march director Louisa Clary told the outlet that they have “contracted out comprehensive private security who will work in concert with local and federal law enforcement in keeping this march peaceful”.

In a statement, the executive director of SITE Intelligence Group, Rita Katz, said that it’s a “noteworthy development” that “the two major anti-vaccine events planned for this weekend” – Defeat the Mandates and the World Wide Rally for Freedom – “are now officially linked”.

“This has increased the visibility of both campaigns. It is also certain that MAGA/Stop the Steal supporters will also participate in the DC event, given that it has been endorsed and promoted by Steve Bannon,” she added.

“Although we have not yet seen the events being discussed by organized violent extremist groups such as the Proud Boys, the scale of promotion suggests significant participation, and it cannot be ruled out that provocateurs and accelerationists will join,” she said.