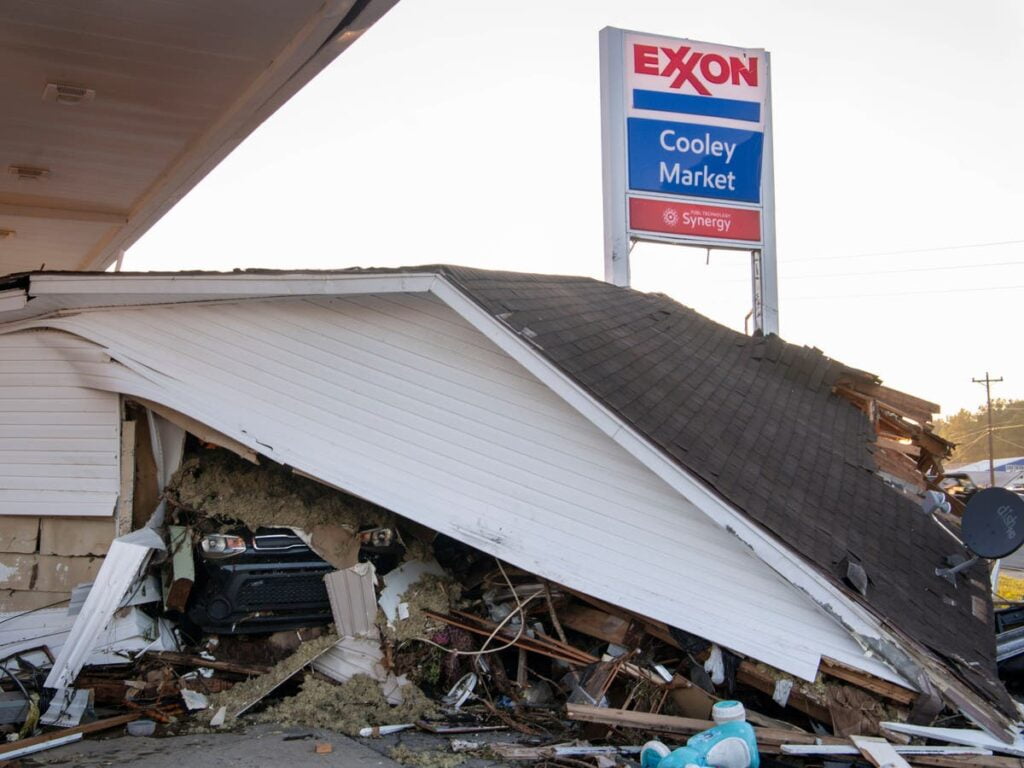 A car peeks out from under a house that was destroyed by floodwaters at the Cooley Market in Waverly, Tennessee

A ranch foreman who worked for country music superstar Loretta Lynn and two twin toddlers were among the 22 people who tragically lost their lives as the US town of Waverly, Tennessee, and its surrounding counties were devastated by catastrophic flash flooding over the weekend, the disaster brought on by torrential rainfall that struck without warning.

Search and rescue efforts continue with an estimated 20 people still missing as local citizens say they were caught totally off guard by the 17 inches of rain that hammered the area over 24 hours – much of it within a six-hour window.

Responding to the tragedy, US president Joe Biden expressed his sincere condolences from the White House and said: “We’ve reached out to the community and we stand ready to offer them support.”

Sheriff Chris Davis of Humphreys County, Tennessee, says one of his own best friends died in the flood.

“They just went and got one of my best friends. He drowned in it,” Mr Davis told WSMV.

So far, 22 people have been reported dead in the floods.

“It hurts,” Mr Davis went on. “If I slow down and think about it, I get emotional. If I stay working and stay focused, I work through it.”

Survivors of the deadly flooding in Tennessee say the waters rushed in like a tsunami.

“All of a sudden it was like a tidal wave that just came over the road and into my yard,” Casey Hipshire told CNN. “Next thing I know the water is in my house, and it’s up to my chest.”

Ms Hipshire said she, her husband, and their eight-year-old son survived by breaking a window and climbing through it onto their roof.

Josh Whitlock and Stacy Mathieson look through what is left of their home after it burned following flooding in Waverly, Tennesse on Sunday 22 August 2021

This was the scene in the stricken Tennessee town the morning after the storm had passed, leaving a trail of carnage and debris in its wake.

A car flipped upside-down and supporterd by a utility pole in Waverly, Tennessee, the morning after the devastating flooding

A car and mangled utility building lean against one another in Waverly, Tennesee, after the storm

Brian Mitchell, right, looks through the damaged home of his mother-in-law along with family friend Chris Hoover in Waverly on Sunday

Meanwhile, on the other side of the country, New England also looks set to be battered by heavy rain after the latest Atlantic front made landfall and doused Rhode Island, Connecticut and New Jersey.

Here’s a little more from Twitter, underling the scale of the disaster Waverly is facing.

‘Knowing that you have people that stayed that can’t get help… It hurts, it hurts’

Also speaking emotionally at yesterday’s press conference was the aforementioned Patrick Sheehan, director of the Tennessee Emergency Management Agency, who said rescue efforts “will go on until we account for all missing Tennesseans”

“It’s pretty devastating on the ground. We’re going to see mostly recovery efforts at this point rather than rescue efforts.”

Sheriff Davis was also reportedly holding back tears as he remarked: “Knowing that you have people that stayed that can’t get help… I have people floating down the creek that nobody can get to, and nobody can help. It hurts. It hurts.”

Mayor Buddy Frazier agreed, observing that the loss of life was unlike anything the town has ever experienced.

“I’ve been around a long time, and I’ve been through a lot of events here and this one really took me back… This is bad, this is bad. The number of people it affected, the number of lives lost.”

So said Waverly Police and Fire chief Grant Gillespie during his afternoon press conference outside the county courthouse on Sunday, addressing the flood damage done to infrastructure, schools, homes and other facilities in the town.

“We’ve experienced devastating loss of life over the last couple of days. We’ve lost more people in this than in the train explosion of 1978. But we’ve seen the community come together,” he said, according to Tennessean reporter Mariah Timms.

In one bit of good news, Gillespie was able to reduce the number of missing people by halve, explaining that the restoration of mobile phone service had allowed people to get back in touch with their loved ones and let them know they were safe.

Gillespie also said that an 8pm curfew would remain in place in Waverly over the coming days and that a number of looting suspects had been apprehended amid the chaos.

“We’ve got some very, very bad damage in our city, in our county. It’s going to take us a while. We’ve got to rebuild some infrastructure,” Sheriff Davis said at the same event, the group also saying that water quality was improving but that a boil order remained in effect in the interests of public health.

Reunification centre set up, local schools closed… and a message of hope from Germany

The Humphreys County Sheriff’s Office has been busy on Facebook, giving details of a reunification centre it has set up to bring people separated by the floods back together and offering information on how to donate to the stricken community.

It also posts this kind message of encouragement from a German citizen, whose own country was also devastated by flash flooding earlier this summer, along with swathes of Belgium, the Netherlands, Luxembourg and Switzerland.

Wayne Spears, who worked for the legendary “Coal Miner’s Daughter” singer, was among the 21 who lost their lives in the disaster over the weekend.

“He’s out at his barn and next thing you know, he goes from checking animals in the barn to hanging on in the barn to people seeing him floating down the creek. And that’s how fast it had come up,” Sheriff Chris Davis said.

Spears was seen in one photo taken by someone at the ranch wearing a cowboy hat and clinging to a pillar in brown churning water up to his chest while video posted on Twitter revealed the extent of the flooding at the farm.

Lynn’s people have since paid tribute to Spears, saying the star, 89, is “heartbroken” at the loss and applauding his “ready smile, kind heart, and willingness to go the extra mile for everyone around him”.

“Wayne’s just one of those guys, he just does everything for everybody, if there’s a job to do,” his friend Michael Pate, who met Spears at Lynn’s ranch 15 years ago, told the AP.

The National Weather Service (NWS) described the situation in Tennessee as “catastrophic” on Saturday night, with the hardest-hit areas like Waverly seeing double the rainfall the region suffered in its previous worst-case scenario for flooding, according to meteorologists.

Lines of storms moved over the area for hours, wringing out a record amount of moisture – a scenario scientists have warned may be more common because of global heating and the climate emergency.

The downpours rapidly turned the creeks that run behind backyards and through downtown Waverly into raging rapids.

Business owner Kansas Klein stood on a bridge on Saturday in the town of 4,500 people and saw two girls who were holding on to a puppy and clinging to a wooden board sweep past, the current too fast for anyone to grab them. He is yet to find out what happened to them, the AP reports.

Not far from the bridge, Klein said that dozens of buildings in a low-income housing area known as Brookside appeared to have borne the brunt of the flash flood from Trace Creek.

“It was devastating: buildings were knocked down, half of them were destroyed,” he said. “People were pulling out bodies of people who had drowned and didn’t make it out.”

Social media has been inundated with local stories from the disaster, many deeply tragic.

Just to the east of Waverly, the town of McEwen was pummeled Saturday with 17.02 inches of rain, smashing the state’s 24-hour record of 13.6 inches from 1982, according to the NWS in Nashville.

A flash flood watch was issued for the area before the rain started, with forecasters saying 4 to 6 inches of rain was possible. The worst storm recorded in this area of Middle Tennessee only dropped 9 inches of rain, said Krissy Hurley, a weather service meteorologist in Nashville.

“Forecasting almost a record is something we don’t do very often,” she said. “Double the amount we’ve ever seen was almost unfathomable.”Recent scientific research has determined that extreme rain events will become more frequent because of man-made climate change.

Hurley said it is impossible to know its exact role in Saturday’s flood, but noted in the past year her office dealt with floods that used to be expected maybe once every 100 years in September south of Nashville and in March closer to the city.

“We had an incredible amount of water in the atmosphere,” Hurley said of Saturday’s flooding. “Thunderstorms developed and moved across the same area over and over and over.”

But the problem isn’t limited to Tennessee. A federal study found man-made climate change doubles the chances of the types of heavy downpours that in August 2016 dumped 26 inches of rain around Baton Rouge, Louisiana. Those floods killed at least 13 people and damaged 150,000 homes.