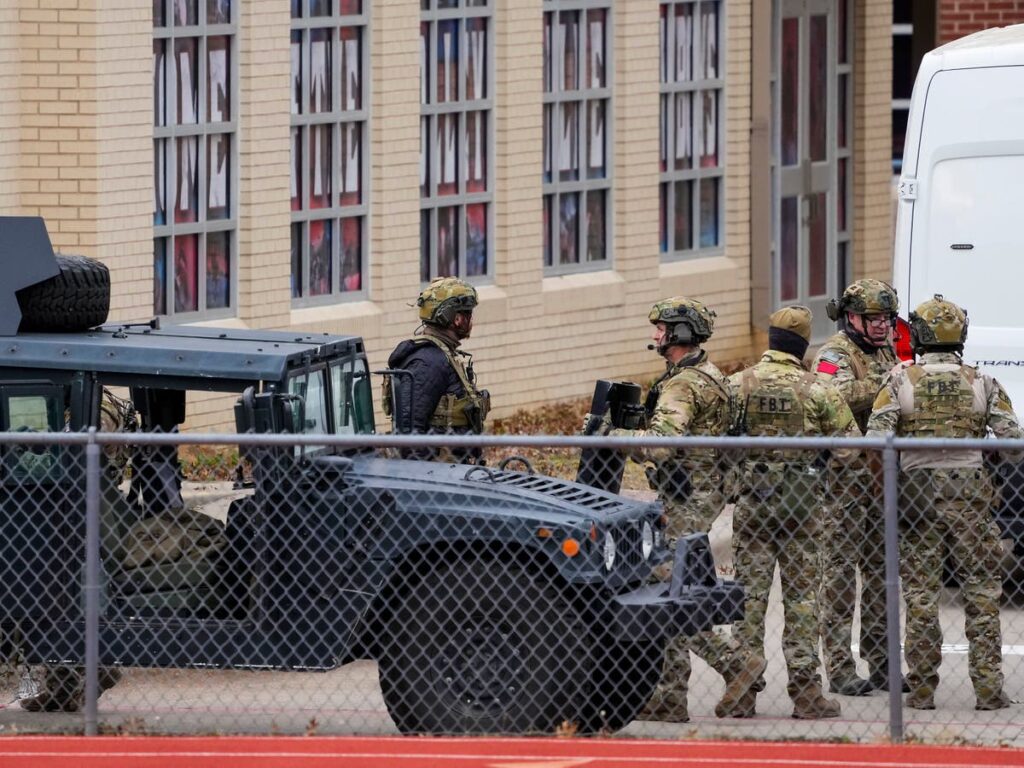 How did a British man from Blackburn end up holding four people hostage in a synagogue in Texas? That is the question both UK and US authorities are now trying to answer after the FBI named Malik Faisal Akram as Saturday’s hostage-taker.

Akram, 44, held the congregants at the Congregation Beth Israel synagogue in Colleyville, Texas, on the outskirts of Fort Worth, for about ten hours on Saturday. A Facebook livestream of the Shabbat service was left running at first, and remote viewers heard him negotiating with police.

Finally a hostage rescue team secured the prisoners, and Akram was killed, though it’s not clear exactly how. Reporters at the scene said they heard gunfire and explosions, and a man claiming to be Akram’s brother said he was “shot and killed” in a firefight.

So what do we know about Malik Faisal Akram and his motives?

From Lancashire to Texas via New York

“I don’t wanna hurt ’em, yeah? Are you listening?”

Those were among the last words captured from the Beth Israel livestream before it was removed by Facebook. They were spoken by an unseen man, apparently the hostage taker negotiating with police officers over the phone.

His accent didn’t seem to be American. His way of speaking – peppered with “yeah?” and “bro” and “man” used like punctuation – suggested British colloquialisms.

On Sunday we learned why. A bulletin from the FBI named the man as Malik Faisal Akram, a British citizen from Blackburn, Lancashire. “At this time, there is no indication that other individuals are involved,” the agency said.

The UK’s Foreign and Commonwealth Office confirmed that it was “aware of the death of a British man in Texas and in contact with the local authorities”.

London’s Metropolitan Police, which handles terrorism cases across the UK, said it was “liaising with US authorities… regarding the incident in Texas”.

According to CBS News, Akram is not a US citizen and arrived in the country about two weeks ago via JFK International Airport in New York City. He has no criminal record in federal courts.

Investigators reportedly assessed the hostage-taker as “emotionally unstable”. On the livestream, he sounds highly agitated, sometimes berating the negotiator, repeating himself, and often appearing to lose his composure.

We don’t know much else about Akram’s life, such as what his trade was, whether he was married, or why he flew to the US.

It was later taken offline, but in screenshots made by The Independent he describes spending the night in the incident room at Greenbank police station helping the FBI and hostage negotiators.

“Although my brother was suffering from mental health issues, we were confident that he would not harm the hostages,” said the post, which referred to Akram by his middle name Faisal.

“At around 3am the first person was released, then an hour later he released the other three people through the fire door unharmed.”

That account is backed up by news footage from WFAA showing two people dashing out of the synagogue’s fire escape, followed by a man holding a firearm and wearing a face mask. He is seen on video peeking out and then quickly vanishes back inside. Afterwards, armed police take up positions around the walls.

The Facebook post continued: “A few minutes later a firefight has taken place and he was shot and killed. There was nothing we could have said to him or done that would have convinced him to surrender… obviously our priority will be to get him back to the UK for his funeral prayers, although we have been warned it could take weeks.”

The post also mentioned the death of a younger sibling “barely three months ago”. It said FBI agents were due to fly to the UK on Sunday, possibly to interview Akram’s family. It began and concluded by saying the whole Akram family condemns the hostage taker’s actions.

A chance remark caught on the livestream gives one additional detail about Malik Akram’s life.

“Don’t f***ing cry over me, okay?” the man tells the negotiator at one point. “I left six beautiful kids. I didn’t cry… my heart has become stone.”

What was Akram’s motive?

Early reports suggested that the hostage-taker was demanding the release of Aafia Siddiqui, a US-educated Pakistani neuroscientist serving 86 years in prison in Fort Worth for attempting to shoot American soldiers n Afghanistan.

She maintains her innocence. A number of supporters in the US and in Pakistan, including the Texas-based Free Dr Aafia campaign, believe she was framed.

It’s clear from the livestream that Malik wanted to speak to a certain prisoner, whom he referred to as his “sister”.

That language – potentially a generic honorific – may have been the source of a false initial report that he was Siddiqui’s actual biological brother Muhammad, whose lawyer says he was 300 miles away in Houston.

Aafia Siddiqui’s lawyer told The Independent that Akram had “absolutely” no connection to her client or her family and that her client “has always maintained that no violence should be done in her name”.

In the livestream, Akram appears to say: “This is the situation, yeah? These are the stakes. You’ve got hostages in a synagogue. He’s asked for a prisoner to be released, and his gonna die, okay?”

Later he demands the negotiator put his “sister” on the phone, saying that “once you get my sister, things will” change or turn (the audio is unclear). At another point, apparently asked about his motives, he repeats twice: “I care about her, that’s why I’m doing it.”

FBI special agent in charge Matt DeSarno said they believed the man was “singularly focused on one issue and it was not specifically related to the Jewish community”, adding they will continue to “work to find motive”.

Jewish leaders have reportedly condemned the FBI’s apparent suggestion that an attack on a synagogue could be unrelated to antisemitism, particularly considering the potential link to Siddiqui. Throughout her trial, she made antisemitic statements, and at one point demanded the jury be genetically-tested so Jewish people could be excluded.

Both the FBI and the Gulbar Akram’s refered to “mental health issues” in statements about the hostage-taker.

How did he get a gun and did he have explosives?

Even with its liberal gun laws, Texas does not allow foreign citizens who are not US residents to legally purchase guns. Given that Akram reportedly arrived in the US two weeks ago, it’s unclear how he obtained a weapon.

During a visit to a food bank in Philadelphia this weekend, President Joe Biden suggested one theory after cautioning that officials do not yet have all the facts.

“Allegedly the assertion was he got the weapons on the street,” Mr Biden said. “He purchased them when he landed and it turns out there apparently were no bombs that we know of.”

According to CBS, no explosives had been found at the synagogue (as of 12.17pm Central Time on Sunday). Akram had reportedly claimed to have bombs set up in unknown locations.

An official told CBS that Akram had joined the synagogue service on Saturday by claiming to be a homeless man. Mr Biden also said he had been told the hostage-taker spent his first night in the US in a homeless shelter.