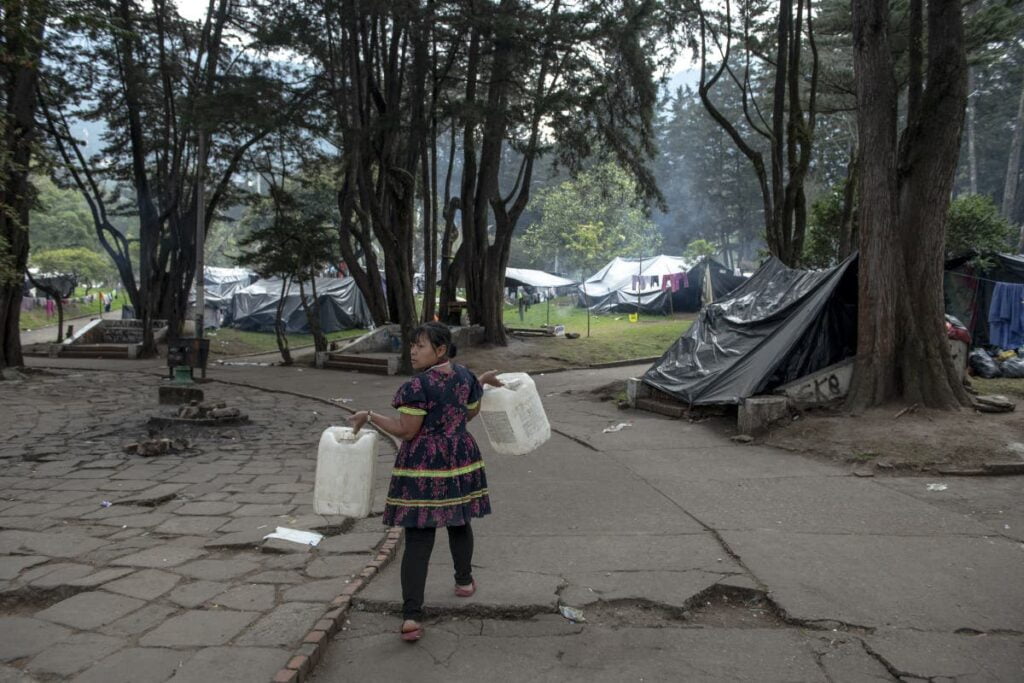 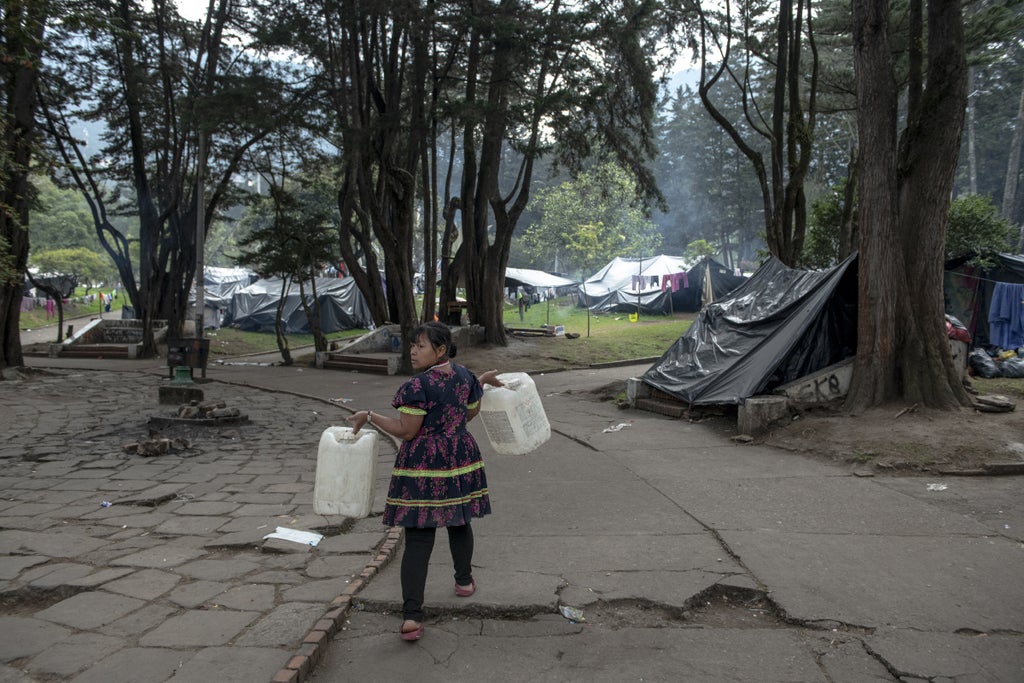 For two months, the family of six had slept beneath a plastic tarpaulin in the cold rain. Maria Lubia Queracama Tanigama held her newborn and two toddlers tight, using her body to keep them warm as nighttime temperatures dropped to about 5C. Her husband and their six-year-old lay next to her on a thin mat, the only thing between them and the Bogota dirt.

The Embera Indigenous family arrived in Colombia’s capital in 2020 in search of refuge from a conflict with no end. Forced off their land by armed groups in the western department of Choco, they fled to a city that has long struggled to find homes for families such as theirs. They were in and out of government-subsidised housing: a few months in an apartment, a few months on the streets. Back to an apartment. Back to the streets.

Desperate to break this cycle, Indigenous leaders tried once more to demand a solution from the government. In late September, hundreds of evicted families marched through Bogota for 14 hours before camping out in National Park in the heart of the capital. They set up hundreds of tarpaulins between the park’s monuments, fountains and trees. Perhaps here, in one of the city’s most prominent parks, they thought, their cries for help would be impossible to ignore.

Their fight would come at a steep cost.

After two months living in the open air in this high-altitude city, amid smoke from cooking fires, Queracama’s 21-month-old son, Yonquin, fell ill. First came the diarrhoea and the vomiting. Then he became drowsy and struggled to breathe.

An ambulance rushed him to a hospital just blocks away. By the time Yonquin arrived it was too late. The toddler had suffered a cardiorespiratory arrest. Before his death, doctors said, he had a stomach flu, severe malnutrition and severe dehydration.

“The death of Yonquin can be explained with one word: arrogance,” says Jairo Montanez, a leader representing the Indigenous communities occupying the park. “Arrogance on behalf of a government that has wanted to ignore the problem and make it invisible.”

It was a tragedy that we warned could happen, and that could have been avoided if they had allowed us to enter, if we’d known about the situation a day earlier or days earlier

To Indigenous leaders, the toddler’s death underscores the government’s neglect of the displaced victims it has promised to support. To local health officials, it was the result of the community’s refusal to accept the city’s offers to move them to safer living conditions. In the 10 days before Yonquin died, city officials say, Indigenous leaders refused to let public health teams into the park. The leaders deny the allegation.

Yonquin’s death – from what health workers say were preventable causes, just steps from one of Colombia’s premier hospitals – has become the latest symbol of the struggle to resolve a displacement crisis that, five years after the country’s peace accords, is only getting worse.

Hundreds of families are still living in the park. Indigenous leaders have turned down the city’s offer to transfer the families to an indoor shelter on the outskirts of Bogota. They’re demanding permanent, collective accommodations and government support for their safe return to their land.

But as the sides try to reach an agreement, children are falling ill. The park’s leaders have been transporting about three to four children to the hospital each day, almost all of them under the age of two, Montanez said. And many of their parents, who are used to relying on traditional healers, are reluctant to send their children away to medical professionals they don’t trust.

Colombia has nearly 5 million internally displaced people, a number surpassed only by Syria and the Democratic Republic of Congo. That includes at least 82,846 who were forcibly displaced between January and November 2021, a 169% increase from 2020 and the largest number in the five years since the government signed the historic peace deal with the Revolutionary Armed Forces of Colombia (Farc), according to the Bogota-based Consultancy for Human Rights and Displacement. Nearly 23% of those victims were Indigenous, and at least 9,857 were forced from Choco, home to many of the Embera families in the park campsite.

Indigenous groups such as the Embera have long distrusted Colombia’s institutions, a result of the country’s failure to follow through on promises to provide these communities with health services, food security or safe territories.

Families displaced by Colombia’s decades-long conflict have a right to reparations and restitution through a comprehensive victims’ law, which provides state support toward education, health, housing, employment and more. But for many families, government aid has fallen short.

Eight out of 10 households of victims of forced displacement in Colombia say they are living in poverty, according to the Commission for Monitoring Public Policy on Forced Displacement, a Colombian group. Four out of 10 stopped eating three times a day during the pandemic.

One of those families was Queracama’s. Living in the park, they have depended on donations for food. And in the days leading up to Yonquin’s death, the parents and children would often eat only one meal – usually some rice, potatoes and plantains.

Public health workers who have been monitoring children in the park last saw Yonquin on 17 November, according to a city report. He showed no signs of illness, according to a health worker who has followed the family’s case. She spoke on the condition of anonymity because she was not authorised to discuss the matter.

For the next 10 days, she said, Indigenous leaders did not permit health workers to enter the park. The next time she heard about Yonquin was in a call from someone in the park on 28 November. “The boy is dying,” the person told her. “Run,” she replied.

“It was a tragedy that we warned could happen, and that could have been avoided if they had allowed us to enter, if we’d known about the situation a day earlier or days earlier,” says Daniel Camacho, Bogota’s undersecretary for governance and the guarantee of rights. “The children there are exposed to conditions that aren’t dignified, that aren’t favourable to their health.”

Pedestrians walk past a banner in Bogota that reads, ‘The people united are invincible. No to the eviction’

A day after the death of Yonquin, the public health worker noticed the boy’s younger brother, a three-month-old named Mesi, also having trouble breathing. He had been hospitalised before for respiratory problems, and his health was quickly deteriorating. But the parents didn’t want to go back to the hospital they didn’t trust, the place where their other son had been pronounced dead a day earlier.

But the health worker insisted: “The child is going to the hospital. We’re not going to lose another one,” she said. “Even if I lose my job.”

An Indigenous leader took the baby from Queracama’s arms and rushed him to the ambulance. He would remain in hospital for weeks.

One recent afternoon, Queracama stood in National Park with tears in her eyes and a piece of paper in her hand.

It was a message from the hospital. Mesi would soon be ready to leave the hospital but would be temporarily handed over to Colombia’s child welfare agency.

Queracama had already lost one child to illness. Now she worried she would lose another to the state.

She rushed over to leaders overseeing a park that was now home to 15 Indigenous groups, many speaking different languages. They assured her she wouldn’t lose her baby. The government wasn’t allowed to take custody of Indigenous children as long as their rights weren’t being violated. But Queracama wasn’t convinced.

Queracama, centre right, meets representatives of the Indigenous Authorities of Bakata Association handling the transfer of her three-month-old son from the hospital to the hotel in Bogota

Days later, rush-hour traffic whizzes by along the Carrera Septima, one of the most important thoroughfares in Bogota, just feet from Queracama’s bed. Queracama, wearing a floral short-sleeve dress, squats to build a fire and boil water.

Smoke fills the air. Steps away, about two dozen people show up at the park’s entrance, part of a new group that has arrived the night before. Among them are her husband’s relatives, including a sister-in-law with a newborn baby.

Queracama nestles her face into the little girl’s fuzzy pink onesie, the baby reminding her of her own, still in the hospital. Today Mesi is to be released.

Queracama takes her niece and walks over to a group giving out clothes. A woman, another resident of the park, walks up to her and smiles. “Is that your baby?”

A group of leaders gather in a circle to explain to Queracama what she has to do to get her son back. Local officials have decided it is not safe to let the infant return to the park. They offer to arrange a hotel room for the mother and her children, where the baby could recover while continuing to receive oxygen.

“That’s the only way, or else they won’t give you the baby,” Montanez says.

Young people walk through the camp in Bogota’s national park

Queracama doesn’t want to go to the hotel. She doesn’t trust that the oxygen is helping. Her son has been sent back to the hospital three times since he was born.

But she agrees to go as soon as the hospital calls to let her know the baby’s oxygen is ready.

A few hours later she receives another call: her son’s breathing has got worse.

She rushes across the park, fast-walking uphill to a medical centre blocks away, where her husband is waiting. She arrives to find two health workers standing outside.

“They’re going to have to transfer the baby,” a health worker tells her. To another hospital, another doctor the mother didn’t trust.

With panic in her eyes, the mother leans against the side of the building and waits.

The Washington Post’s Diana Durán contributed to this report.