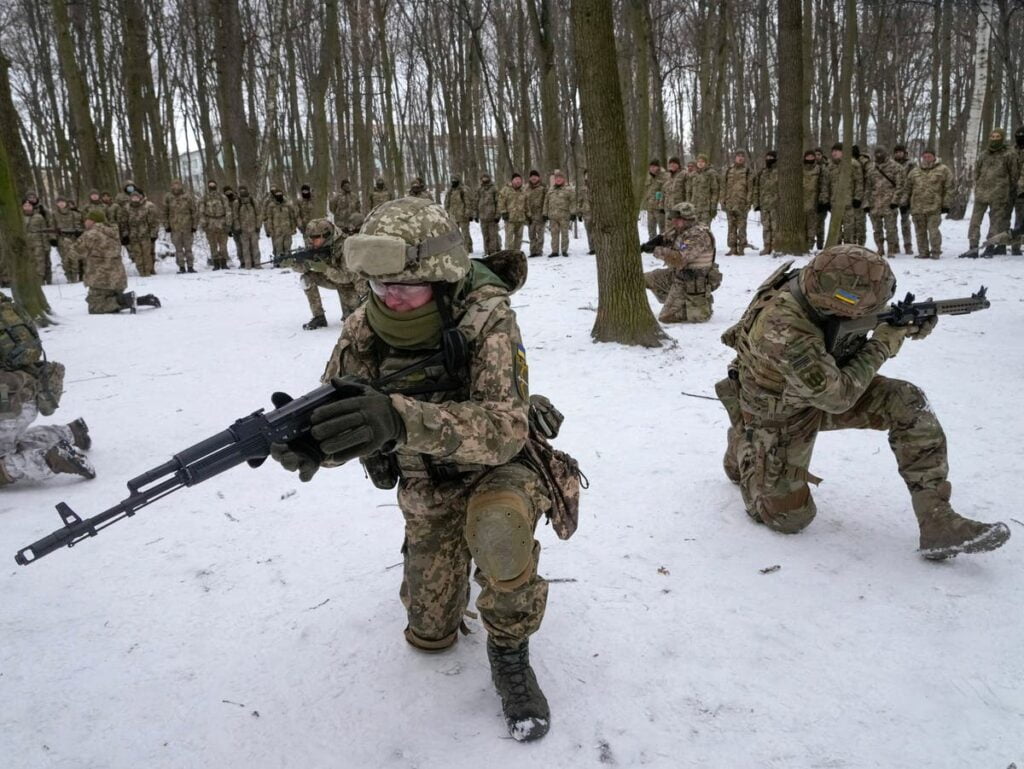 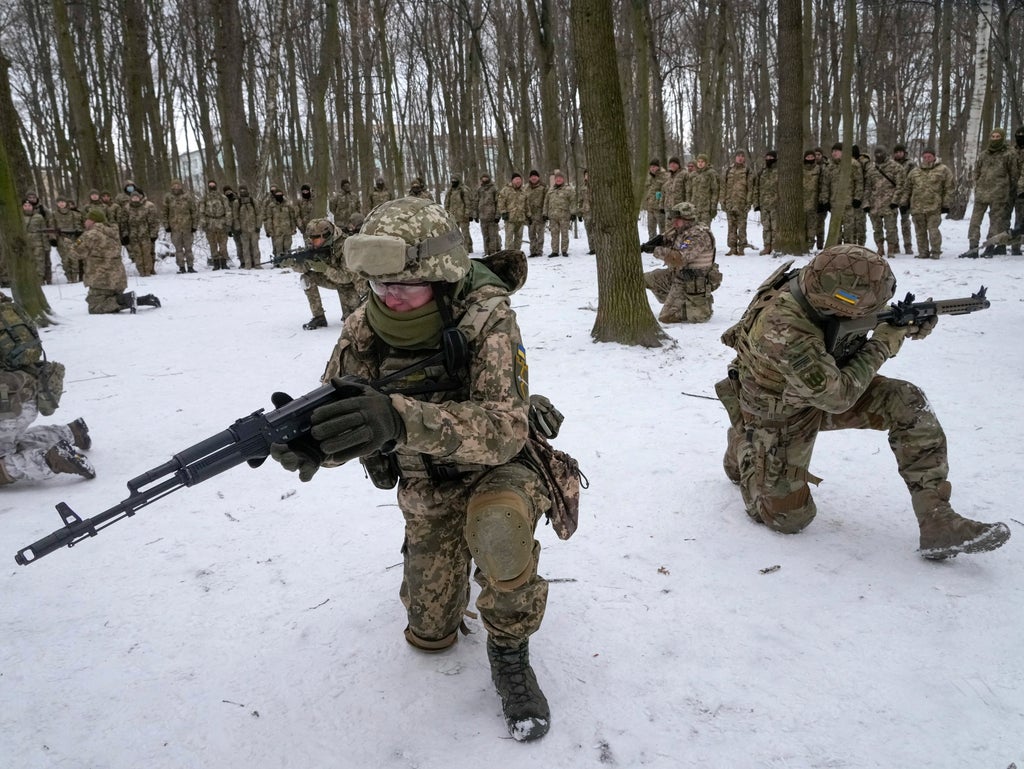 Russia is seeking to install a regime of collaborators in Kyiv while Vladimir Putin makes a final decision on whether to invade Ukraine, the British government has claimed.

The suggestion of a plot, which London says is based on credible sources, comes at a highly volatile moment in the crisis with frenetic diplomatic moves taking place in a desperate attempt to avert a devastating conflict.

The allegations come two days after the US imposed sanctions on four Ukrainian officials, including two MPs, who were allegedly involved in clandestine Russian operations, including planning to set up “false flag” operations, to provide pretexts for military action.

The British government publicly names Yevhen Murayev, a former Ukrainian MP and media owner, as being considered by the Kremlin as the future leader of a friendly Kyiv administration with four others, including a former prime minister and a former acting prime minister, among those who are supposedly to be given senior ranks.

The claims of clandestine operations came as it was reported that the US embassy had requested the evacuation of all non-essential staff over deep apprehension of imminent Russian military action. The evacuation could begin “as early as next week” according to CNN, who said they had received the information from Ukrainian officials.

At the same time the US embassy announced that the latest tranche of US weapons supplies to Kyiv, including “200,000 pounds of lethal aid, including ammunition for the frontline defenders of Ukraine” has arrived. Earlier this week President Joe Biden said he now expected Mr Putin, to “move in” and attack Ukraine. The US secretary of state, Antony Blinken met Sergei Lavrov, in Geneva on Friday. Washington is due to give a written response to proposals made by the Russian foreign minister next week.

The British allegations of Moscow’s clandestine mission suggest that the Kremlin is planning for the aftermath of a conflict. Mr Murayev and the other men, it is claimed, have links with Russia’s intelligence services and are part of a wider and active network.

All those named are seen as close to Moscow. They have all insisted in the past that they acted independently and were not following Moscow’s orders.

Ukrainian officials have regularly accused Moscow of carrying out undercover missions in preparation for military conflict. Col Shcherbina Mykhailo, deputy chief of security for Kyiv municipality, told The Independent he was not surprised by the allegations. “We have no doubt that there are people in Kyiv and elsewhere in the country who are waiting for orders from Putin.

“We know who many of them are and take action when possible. But there are no preventive laws like internment and so they remain here ready to act. This is in the political field as well as in a military capacity.”

Mr Murayev maintains that the annexation of Crimea by Russia should be recognised by the international community. He had also declared that Donald Trump, when he was running against Hillary Clinton, would be a good US president for Ukraine. On another occasion he held that American mercenaries were used to fight separatist forces in the Donbas.

Mr Murayev, a member of the pro-Russian Party of Regions, is the owner of Nash TV which is hostile to the government of Volodymyr Zelensky. Ukrainian police questioned him last year after claims that he and a bodyguard had threatened a journalist for calling him a Russian spy.

Mr Murayev and his Nashi party are based in Kharkiv, near the Russian border. On Friday Mr Zelensky said in an interview that Moscow may try to occupy Kharkiv and warned that “will be the beginning of a large-scale war”.

The Ukrainian president, said : “If Russia decides to intensify the escalation, of course, they are going to do this in the territories historically inhabited by people who had family ties with Russia. Kharkiv, which is under Ukraine government control, could be occupied. Russia needs a pretext. They will say that they are protecting the Russian-speaking population.”

British foreign secretary Liz Truss, speaking about the alleged Russian plot, said “The information being released shines a light on the extent of Russian activity designed to subvert Ukraine, and is an insight into Kremlin thinking.

“Russia must de-escalate, end its campaigns of aggression and disinformation, and pursue a path of diplomacy. As the UK and our partners have said repeatedly, any Russian military incursion into Ukraine would be a massive strategic mistake with severe costs.”

The US has named the Ukrainian officials sanctioned as Taras Kozak, Oleh Voloshyn, Volodymyr Oliynyk and Vladimir Sivkovich. Following the move Mr Blinken said that the men were closely involved in a Kremlin operation which began in 2020 “to degrade the ability of the Ukrainian state to independently function”.

Mr  Blinken continued “the United States will continue to take steps, including through actions like this one, and in partnership with the Ukrainian government, to identify, expose, and undercut Russia’s destabilisation efforts in Ukraine.”

Ben Wallace, the British defence secretary, is due to meet his Russian counterpart, Sergei Shoigu, next week in Moscow to discuss Ukraine.

The British government, however, is expected to announce on Sunday that intelligence and diplomatic personnel will be brought together to counter Russian undercover attempts to interfere in Ukraine and other countries and “specialist counter-disinformation cells” will be set up in Whitehall.

Ministers and ambassadors will press allied states to back “economic measures to debilitate Russia’s economy should the situation deteriorate” in Ukraine. The UK has supplied Kyiv with 2,000 NLAW (Next Generation Light Anti-Tank Weapon) short-range missiles in recent weeks, along with around 30 trainers.

Boris Johnson will urge the US and Nato allies not to acquiesce to demands made by Moscow in the negotiations so far about Ukraine or wider European security, says Downing Street.

A No 10 source said “The UK is working through Nato and in lockstep with the US to enact a policy of dialogue and deterrence, pursuing the diplomatic track but readying a package of sanctions that will pierce the heart of Russia’s economy should that fail. He is very clear that countries must be free to choose their own futures and the voice of those in eastern European must be heard in the negotiations.

“The PM regards the situation as gravely dangerous and is being briefed on the situation daily. His is prepared to engage with President Putin directly, as he did in December, but he regards western unity as key. He’s in close contact with Zelenskyy and other western leaders. The whole of Whitehall is ramping up preparations – departments and the security services are holding multiple daily coordination meetings to try address the current threat and prepare for any escalation.”