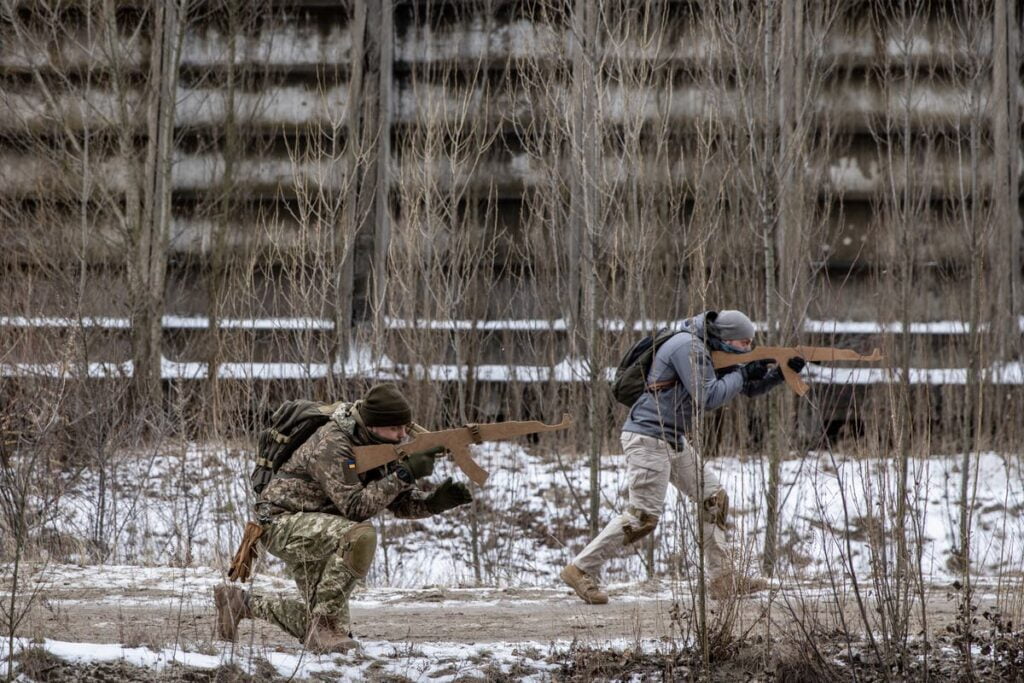 Ukrainian troops staged urban combat exercises in the Chernobyl Exclusion Zone amid the rising tension of a Russian invasion.

Soldiers dressed in white camouflage gear held drills on the empty streets of Pripyat on Friday as they practiced live-fire training in the area empty since residents were evacuated following the nuclear reactor disaster in 1986.

Russia has amassed more than 100,000 troops near Ukraine’s borders in recent weeks amid increasing disagreements between Russia and Nato over both side’s tactics.

The Chernobyl Exclusion Zone made for an ideal training ground for troops who practiced clearing armed attackers from buildings, targeted mortar fire and took on snipers in urban conditions.

Emergency service workers staged evacuations – a speaker on a drone telling residents to clear out -and fought fires caused by fighting.

“As there are no civilians around here we can conduct exercises with real ammunition in a situation as close to actual urban warfare as possible,” one National Guard serviceman, giving only his call sign Litva told AFP news agency.

Ukrainian civilians have also been involved in war preparations

Ahead of the training – the first of its kind staged in Pripyat – workers with Geiger counters had to scan the route to check there were no radioactive hotspots.

“It has all been checked and it doesn’t present a danger,” Litva said, as he clutched his automatic rifle to his chest.

Russian president Vladimir Putin and his Chinese counterpart Xi Jinping have shown a united front on the sidelines of the Winter Olympics as the two countries issued a joint statement calling for Nato to halt its expansion amid rising tensions over Ukraine.

The Kremlin said the two leaders held warm and substantive talks in Beijing and described the relationship as an advanced partnership with a special character.

The two countries expressed concern about “the advancement of US plans to develop global missile defence and deploy its elements in various regions of the world, combined with capacity building of high-precision non-nuclear weapons for disarming strikes and other strategic objectives”.

They said they opposed further enlargement of US-led Nato and called on the alliance to abandon its “ideologised Cold War approaches”.

A halt to Nato’s eastwards addition of new member states is a key demand of the Kremlin in its standoff with the west over Ukraine. The US has rejected some of Moscow’s key proposals but said it is willing to discuss other topics such as arms control.