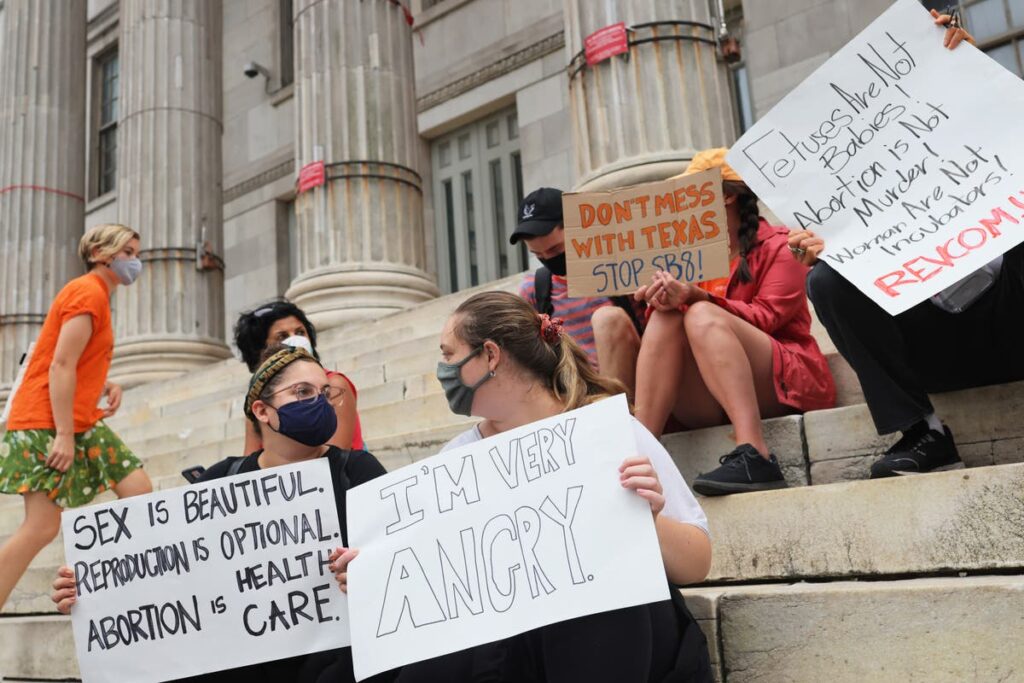 The US Supreme Court’s failure to block a new law from entering into force in Texas means that abortions after six weeks are effectively banned in that state, even in cases of rape or incest. In the Whole Woman’s Health v Austin Reeve Jackson case, a five-four majority of the court denied the application to block Senate Bill 8 (SB 8) in Texas.

From 1 September, SB 8 “makes it unlawful for physicians to perform abortions if they detect cardiac activity on an embryo or fail to perform a test to detect such activity”. This is around six weeks after a woman’s last period, much sooner than many women find out that they are pregnant.

Fierce debate has taken place over women’s sexual reproductive rights since the US Supreme Court’s 1973 landmark decision inRoe v Wade when the court ruled that a woman has a constitutional right to abortion due to her “right to privacy”, guaranteed by the 14th Amendment to the US Constitution. This was hailed as a momentous step towards the protection of women’s rights.

Yet anti-abortion campaigners have been fighting to restrict a woman’s right to choose, most notably through the case of Planned Parenthood v Casey in 1992. In this case, the Supreme Court upheld Roe, but allowed states to place restrictions on first-trimester abortions, such as government-mandated delays between consultation and abortion, so long as they do not impose an “undue burden” on the woman. Previously states had been banned from introducing restrictions on first-trimester abortions.

Allowing the Texas abortion ban to take effect is an attack on women’s rights and will have a devastating impact on women in Texas. It will undoubtedly galvanise other states to further restrict abortions too, with the ultimate goal of these restrictions being a complete overruling of Roe v Wade. This would effectively ban abortions across the US. The likelihood of this happening has increased due to the current politics of the US Supreme Court.

The politics of the US Supreme Court

A key role of the Supreme Court is to rule on points of constitutional and federal law. It hears around 100 cases per year on a range of constitutional issues from administrative law to criminal justice. Some decisions of the court, such as in Roe v Wade, can bind the entirety of the US.

As of 1 September, it became illegal in the state to have an abortion after six weeks

The court is made up of nine justices who are appointed for life by the US president, subject to confirmation by the US Senate. This politicisation of the court naturally creates a divide: conservatives versus liberals. And it has led to fractious five-four decisions when ruling on contentious issues.

Prior to his retirement in 2018, conservative justice Anthony Kennedy acted as the “swing vote” in key cases. He joined the four sitting liberal justices in two pivotal death penalty cases in Atkins vs Virginia (2002), which ruled the death penalty to be unconstitutional where a person has an intellectual disability, and Roper v Simmons (2004), which struck down capital punishment for people under the age of 18.

To complicate the politics of the court even further, the Trump administration had the opportunity to nominate three justices to the court in just four years. This is almost unheard of as justices have life tenure, usually choosing when to retire or sitting until their death. This means they often serve long terms on the court, into old age.

Trump’s first nominee in 2017, Justice Neil Gorsuch, was a replacement for the equally staunch conservative, Justice Antonin Scalia. But, when Justice Kennedy announced his retirement in 2018, this meant that the court lost its swing-vote justice. Kennedy was replaced by Justice Brett Kavanaugh, a right-leaning centrist who was appointed to the court under a cloud of controversy and allegations of sexual assault.

Trump’s final nominee replaced Justice Ruth Bader Ginsburg, a liberal and a lifelong advocate for women’s rights, with another solid conservative, Justice Amy Coney Barrett. These additions to the court made by a Republican president has led to a six-three majority in favour of the conservatives.

As predicted, while Chief Justice Roberts would usually side with his Republican-appointed counterparts on controversial issues, he is now seemingly attempting to save the legacy of the “Roberts court” by joining the Democrat-appointees on certain points. Yet this is not the Justice Kennedy-type swing vote that the chief justice may have hoped it would be, because even when Roberts sides with the liberals – as he did in this case – the conservatives still have a five-four majority.

What this decision means

In this instance, the Supreme Court technically “failed to act” by not striking down the Texas law. (The case was an application for “injunctive relief”, which asked the court to block the enactment of the legislation, rather than adjudicate on the issues.)

But the court could still decide to hear a case on whether the Texas abortion ban is unconstitutional or not – and it is also likely that this decision will galvanise other states to further restrict abortions across the US.

While the US president, Joe Biden, has stated that his administration “will protect and defend” a woman’s right to choose, the Biden administration cannot interfere with a Supreme Court decision, as that would breach the doctrine of separation of powers.

Human rights organisations continue to fight for women’s rights, but ultimately, any future decisions on whether a woman has the right to choose an abortion in the US lies with nine justices in Washington DC.

Alice Storey is a lecturer in law at Birmingham City University. This article first appeared on The Conversation.