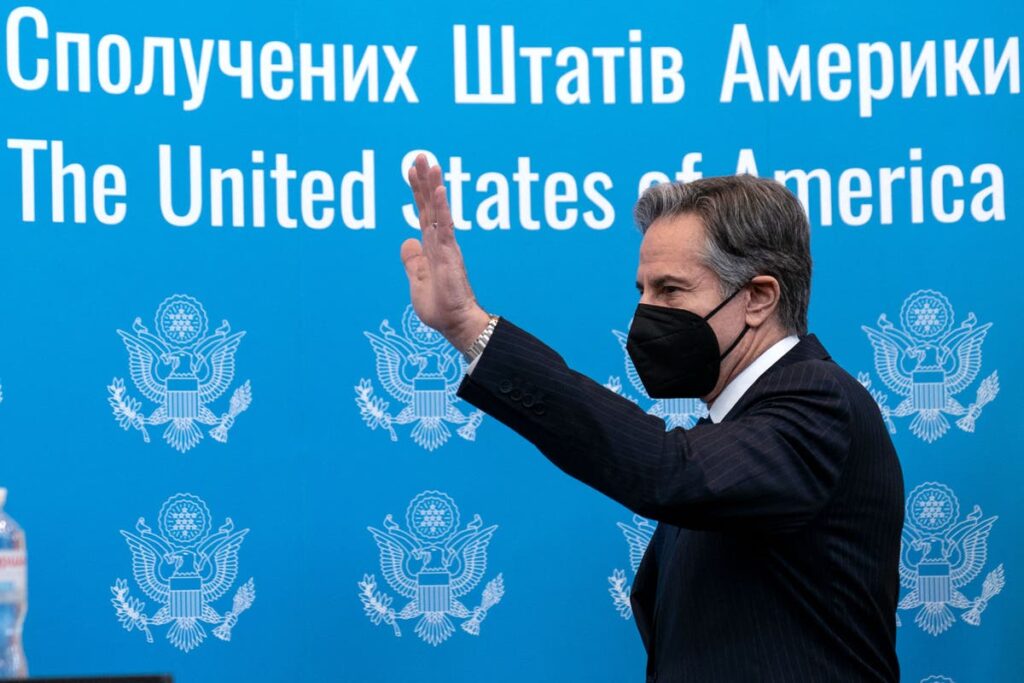 The US Embassy in Kyiv has requested that the State Department authorise the departure of all nonessential personnel and their families, reports say.

Citing multiple sources familiar with the matter, CNN says that the departures could start soon, with an announcement coming in just days. Bloomberg published a similar report.

A State Department spokesperson told CNN that there is “nothing to announce at this time,” adding that rigorous contingency planning is conducted as always in the event the security situation deteriorates.

A source close to the Ukrainian government says that Kyiv has been informed and that evacuations of diplomatic families could begin next week, the network reports.

The same source said that President Volodymyr Zelensky told US Secretary of State Antony Blinken that such a step would be an “overreaction”.

Some 180 Americans are employed by the embassy— a figure that does not include family members.

Mr Blinken was in Kyiv this week where he addressed embassy staff and confirmed $200m in security aid to Ukraine in light of the more than 127,000 Russian troops deployed in the region.

The massing of Russian forces has dramatically raised the fear that an invasion or incursion may be increasingly likely. The New York Times reported earlier this month that Russia has already evacuated family members and some staff from its diplomatic missions in Ukraine.

Earlier CNN reporting said that contingency plans were being drawn up to evacuate Americans from Ukraine.

The country is already under the highest level of State Department travel advisory and Americans have been told not to travel there.

A State Department official says that decisions about overseas staff are based solely on the safety and security of Americans.

“If there is a decision to change our posture with respect to American diplomats and their families, American citizens should not anticipate that there will be US government-sponsored evacuations. Currently, commercial flights are available to support departures,” the official told CNN.

There is no certainty that Russian President Vladimir Putin plans to invade, but the continuing build-up of Russian troops, most recently moving units into Belarus, is particularly worrisome.

President Joe Biden has ramped up his rhetoric to urge President Putin not to invade.

Mr Biden initially said at a press conference on Wednesday: “It’s one thing if it’s a minor incursion and we end up having to fight about what to do and what to not do, etcetera.”

He later clarified that “if any, any assembled Russian units move across the Ukrainian border, that is an invasion,” which would be met with “severe economic response”.

Mr Blinken mooted the possibility of a summit between the US and Russian leaders: “If it proves useful and productive for the two presidents to meet, to talk, to engage, to try to carry things forward, I think we’re fully prepared to do that.”