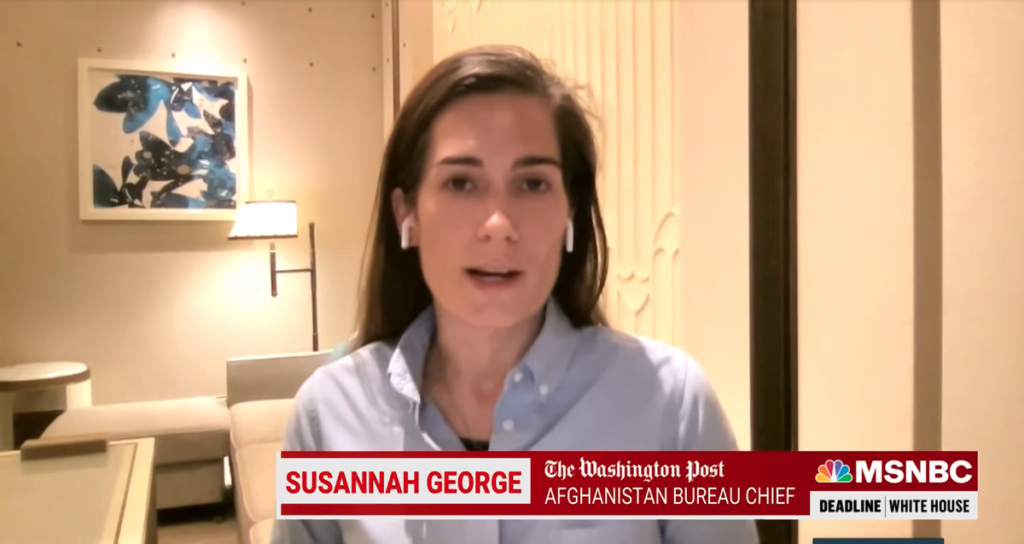 The Afghanistan bureau chief for The Washington Post has said that British troops facilitated her escape from Kabul.

“The day The Post team was set to leave, British troops had arrived at the security compound where I was staying to escort a larger evacuation … It was a coincidence, but it created a small window of opportunity for all of us to get inside the airport’s walls together,” Susannah George wrote in a piece detailing her reporting team’s escape.

“We were lucky because we were able to use a window where the UK troops were conducting their own evacuations,” Ms George told MSNBC.

“These troops had cleared a portion of the road outside one of these gates at the airport, which now you see images of these gates. And there [are] just hundreds of people piled up against them,” she added.

“These British forces had pushed these people back past the Taliban checkpoint and had cleared a portion of the road that allowed us this small window of opportunity to use that bit of road to get inside the military airport and get to a flight that would get us outside of Kabul.”

“Initially, the men were cautious about helping us,” Ms George wrote for The Post. “We weren’t part of their evacuation, and the officer said they needed sign-off from the US Embassy. But after a few phone calls, they agreed to wave Tassal, another Washington Post employee, and their families through the Taliban checkpoint.”

“The only reason I was able to get to the airport with my team was because there was a large British evacuation going on … and also because I was with my team. I am an American passport holder,” she told MSNBC. “The danger of going to the airport is so incredibly high at the moment.”

She explained that they hired armoured cars driven by private security to get to the airport safely, from where The Washington Post had arranged for the team and their families to be flown out. But getting to the airport would be dangerous.

“The American soldiers guarding the gate were surprised to see cars on a street that was supposed to be closed to traffic. I held my press badge against the windshield, nodded to the guard tower and got out of the car, holding up my hands. After a quick exchange on his radio, he allowed us through,” Ms George recalled in her account of the escape.

Within an hour of getting past the barrier and into the Hamid Karzai International Airport controlled by US forces, The Post’s team of 13 people was on a military flight to Qatar.

US forces “don’t have the capability to go out and collect up large numbers of people”, Secretary of Defence Lloyd Austin said last week.

“We’re going to do everything we can to continue to try and deconflict and create passageways for them to get to the airfield. I don’t have the capability to go out and extend operations currently into Kabul,” he added.

On 16 August, Washington Post Publisher Fred Ryan sent an email to National Security Advisor Jake Sullivan urging the US government to get reporters out of Afghanistan.

“Jake, Urgent request on behalf of the New York Times, Wall Street Journal and Washington Post is to have our 204 journalists, support staff and families transported by US Military from the civilian side of the Kabul airport to the military side of the airport where they can be safe as they await evacuation flights,” Mr Ryan wrote, according to NBC News.

Mr Ryan said a week ago that reporters are “currently in danger” and “need the US government to get them to safety”.

“For the past twenty years, brave Afghan colleagues have worked tirelessly to help The New York Times, The Washington Post and The Wall Street Journal share news and information from the region with the global public. Now, those colleagues and their families are trapped in Kabul, their lives in peril,” Mr Ryan added at the time.