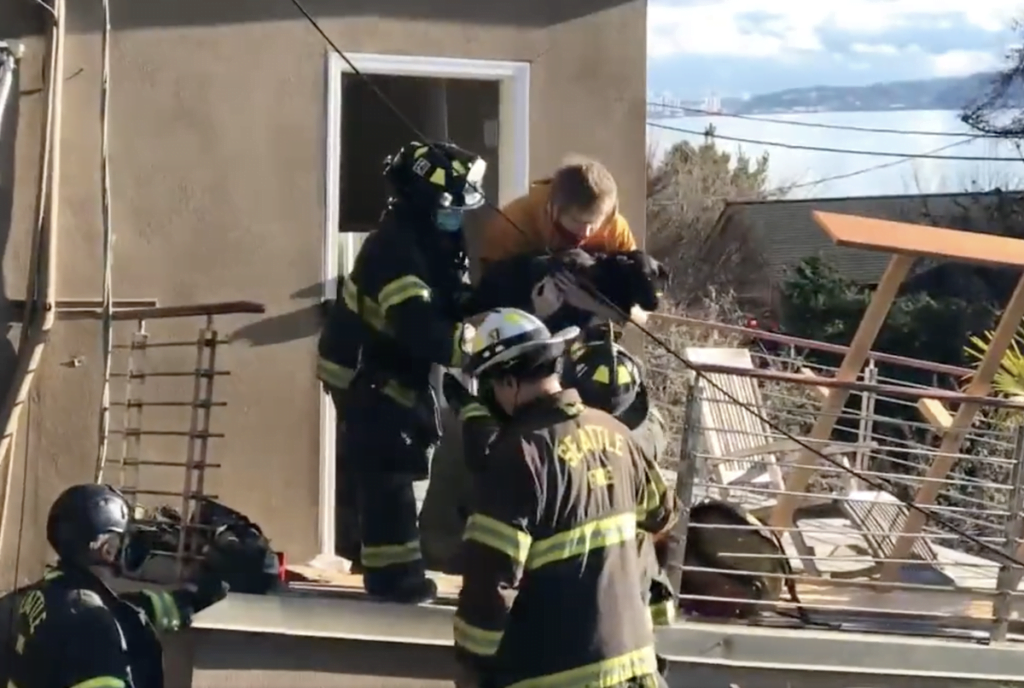 Six days after a landslide destroyed a home in Seattle, firefighters have rescued a dog that was trapped inside.

“My baby! My baby!” the dog’s owner, Didi Fritts, screamed as rescuers emerged with her black labrador, Sammy, on Thursday.

The Seattle Fire Department posted videos of the emotional moment on Twitter, in which Sammy looked alert and well, if a little dazed. The dog reportedly wagged her tail when she saw her owners.

“Firefighters found the dog alive and in stable condition!” the department tweeted.

A devastating landslide hit Seattle’s Magnolia neighbourhood last week, causing Ms Fritts’ house to slide off its foundation. When the second floor of the home caved in, Ms Fritts, her husband James, and their two dogs were trapped inside.

“It was a loud roar, and the whole thing came down on us,” Ms Fritts told KING 5.

Ms Fritts was able to crawl out safely on her own, but James had to wait for firefighters to pull him out with a Jaws of Life device. The couple’s other dog, Lily, was killed in the collapse.

In the week that followed, Mr and Ms Fritts came back to the wreckage again and again to look for Sammy, but couldn’t see or hear any sign of her.

Then, six days after the landslide, one of the Fritts’ neighbours heard a sound.

“We [heard] a little cry this morning,” Remy Olivier, who lives near the Fritts’ house, told KING 5. “I guess she was surviving on rain water the past couple days.”

Mr Olivier called 911, and firefighters rushed to the scene. Soon they heard Sammy too.

“Our crews hear the dog and are searching the building by cutting through walls and flooring,” Seattle Fire tweeted on Thursday.

The next thing they tweeted was a video of Mr Olivier and firefighters carrying Sammy out of the house. Ms Fritts can be heard screaming tearfully in the background.

In the comments, a man claiming to be Mr Olivier said it was a miracle the dog survived.

“We’ve been looking for Sammy since last week when all this started,” he tweeted. “Still can’t believe we got her out. She’s a little shaken up but is remarkably all okay.”