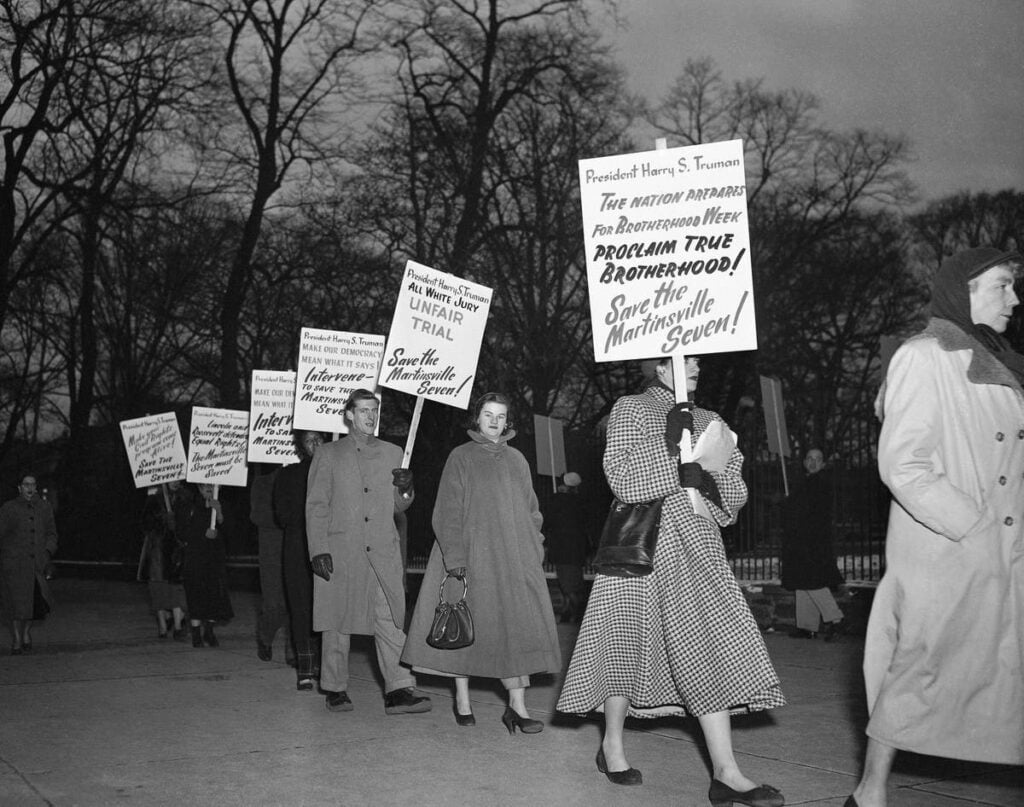 Seven Black men executed in 1951 for the rape of a white woman were granted posthumous pardons by Virginia Governor Ralph Northam on Tuesday, concluding a case that became an example of racial disparity in the use of the death penalty.

The pardons were announced amid cries and muffled sobs from kin of the executed men after the governor met with about a dozen of their descendants and advocates.

Widely known for attracting mercy pleas from across the world, the “Martinsville Seven” men were convicted of raping 32-year-old Ruby Strout Floyd in January, 1949. Ms Floyd, a white woman, had gone to the Martinsville neighbourhood of Virginia to collect money for the clothes she had sold.

After being tried by all-white juries, four of the men were given the electric chair in Virginia in February 1951. The remaining three men were electrocuted three days later.

The case — prominent for seeing the largest execution for a single-victim crime in Virginia’s history — has been known for extreme racial disparity towards the men who were convicted and sentenced to death within eight days.

Highlighting the problems in the execution of seven men, Governor Northam explained that death penalty was applied mostly for Black people exclusively. State records show that all 45 people executed using electric chair for rape between 1908 to 1951 were Black.

“The men were executed because they were Black, and that’s not right. Their punishment did not fit the crime. They should not have been executed,” Mr Northam said, reported AP. The convicted men received a racially-biased death sentence which is not congruent with the justice meted out for white defendants.

The governor added that the pardons issued by him do not address the guilt or innocence of the seven men, who were in their late teens or early 20s but an acknowledgment that they did not receive due process in their case.

Pointing to some major loopholes during the trial, Mr Northam said some of the defendants were impaired when they were arrested and were unable to read confessions they signed. None of the men were represented by attorneys during the course of investigation, Mr Northam said.

All seven men signed statements admitting they were present during the attack, but they had no access to their parents or attorneys at the time, according to Eric W, Rise, an associate professor at the University of Delaware who wrote a 1995 book on the case.

Seeking their posthumous pardons, the descendants and advocates said in a petition that it doesn’t establish the innocence of men but states that their trials were unfair and the punishment was unjust and extreme.

Mr Grayson was 4 when his father was executed. “It means so much to me. I remember the very day the police came to the door. He kissed us and they took him away,” Mr Grayson told AP.

Advocates have argued that the “Martinsville Seven” were not given an adequate due process because of racial discrimination and were sentenced to death ‘simply for being black.’