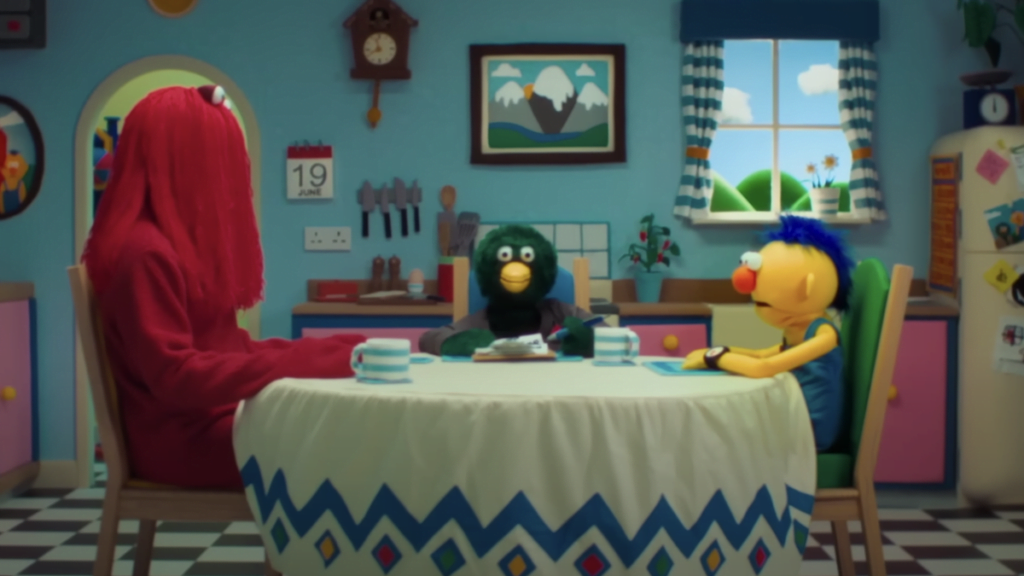 It’s hard to truly understand what younger people are into these days, because the relentless algorithms that shape our culture have divided us all into ever smaller, ever more insular groups. But on the bright side, that same alienation can provide entertainment that previous generations could never have imagined. Like Don’t Hug Me I’m Scared, and TikTok videos about dental procedures.

This month, the second season of Don’t Hug Me I’m Scared was released in the U.K. It started on the internet with a series of bizarre shorts that earned millions of YouTube views, but the new season is in the form of full, half-hour episodes that blend the bright colors and happy songs of children’s programing with absurdist humor, surreal horror, and trenchant commentary on postmodern epistemology (really). It’s not like anything you’ve ever seen, I promise.

The show has not been officially released in the U.S., but so far, no one seems to mind the many rips fans are putting up YouTube. Episode One, in which Red Guy, Yellow Guy, and Duck are introduced to the soul-killing concept of having a job, has been viewed over a million times on one YouTube channel alone. If I were you, I’d check it out now, before it gets pulled, or gets so popular you’ll no longer be cool for finding it early.

At its Meta Connect conference this week, Meta CEO Mark Zuckerberg showed off the next Quest VR headset, but also made a more important announcement, an announcement that will surely turn everything around for the company’s widely ignored VR-chat-thing Horizon Worlds: They’re adding legs!

G/O Media may get a commission

Roombas: Price Matched!
Prime Day is but a distant memory, however, Crutchfield is price-matching iRobot Roombas until October 16. You can save up to $200 and save yourself hella time by letting a smart little robot vacuum clean for you. Here are some choice vacuums below.

I can barely contain myself, Mark!

If you’re without a VR headset and still want to experience legs (and the rest of this weird Horizons thing that no one, even the people who make it, cares about or understands), a version of the nightmare platform is coming to PC and mobile soon. So check it out. Or not. I’m sure using Horizon Worlds will become compulsory soon enough.

Last week, Nintendo dropped the first trailer for The Super Mario Bros. Movie. It looks pretty OK to me, I guess, but “pretty OK, I guess” is definitely not the reaction of faithful Nintendo fans. They’re nothing if not passionate, and they are not into this movie.

The main point of contention is the casting of Chris Pratt as the voice of Mario. I think Pratt seems to have done an acceptable job, though I did briefly think, “wait, isn’t Mario supposed to have an offensive accent?” while watching the trailer. Then I forgot the whole thing. Nintendo fans do not forget. As you’d expect, there’s a lot of online dragging of Nintendo going on, a lot of “you ruined my childhood” dramatics. Some fans are lighting candles instead of cursing the darkness. Someone redid the trailer, reportedly using an AI voice to play Mario. Someone else made this funny sketch about the movie’s casting. Nintendo, I’m quite sure, is aware of fan’s displeasure about Pratt, but considers them a vocal minority.

Another, more serious, problem with the trailer is Mario’s ass. It’s smaller in the film than in the game. Every gamer knows that Mario’s dump-truck hinder is integral to his character— it helps him jump on turtles with more power! I’m sure the movie company is trying to avoid an NC-17 rating by minimizing Mario’s luscious badonka, but I’m not having it. I need to know where to sign a petition, which senator to write to, and where to get a torch and pitchfork.

Eno Alaric is a time traveler from 2671 and has some news for all us living in the present, news he’s decided to reveal on TikTok for some reason: Big changes are coming. In the next six months, a celebrity will reveal that they faked their death! Alaric also gave us five dates with when totally cataclysmic events will definitely occur in the near future:

Alaric is in time-traveler-competition with Brecken Smith, who lives in 2714, has over a million followers, makes suspiciously similar videos, and seems to enjoy riding dirt bikes—in the future.

There’s also @timevoyaging, who doesn’t reveal where in the future they live, but whose videos get tens of millions of views. And there’s @realtiktoktimetraveler, who makes similar videos and predicts…you know what? There are a ton of time travelers on TikTok, and every one of them is really from the future and every prediction they make will definitely come true.

TikTok is getting very into videos of tooth scaling, if the fact that #scaling has more than two billion views is any indication. For many, it seems, close-up footage of folks having tartar scraped from their choppers hits the spot between gross and satisfying. Plus, it makes you feel better about not flossing enough—at least you didn’t let it get as bad as this poor sap, right? (You didn’t, did you?)

Dokter Gigi Tri Putra is the king of TikTok scaling videos. Over three million people follow his feed that’s made up almost entirely of dental videos. He’s got orthodontia, filling cavities, and tooth-bleaching, but it’s that sweet, sweet scaling that really draws people in. Sure, Dr Wei Jian is a dentist with way more followers, but I don’t approve of the lecturing tone of videos like this and this. They’re my damn teeth, I’ll open bottles with ‘em if I want to.