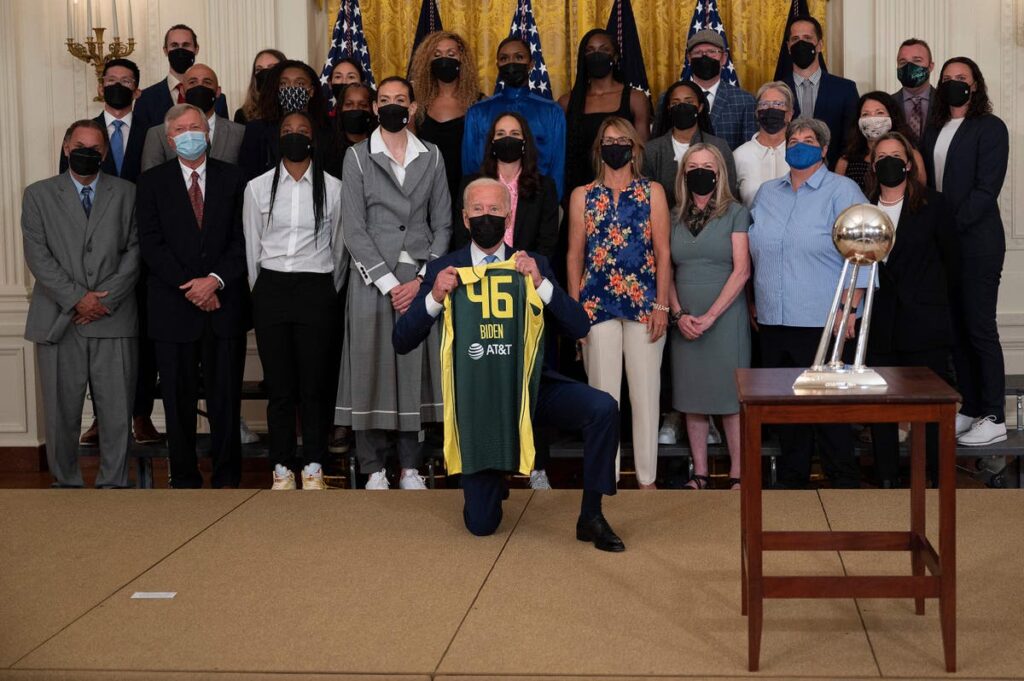 Not everything is a political statement, even in the White House, according to Biden press secretary Jen Psaki.

On Tuesday, she sought to answer questions from the press about whether the president had been kneeling during a photo the previous day with the WNBA champion Seattle Storm as a form of political protest.

“The president certainly supports police reform, but he also was taking a photo with a sports team and he has also kneeled on other occasions with sports teams in the past,” Ms Psaki said.

Since 2016, numerous athletes like former San Francisco 49ers quarterback Colin Kaepernick have knelt during the national anthem as a way to protest systemic racism and police violence against communities of colour.

While Mr Biden may not have been joining this cohort, he did celebrate players on the Storm like star point guard Sue Bird for their activism on topics like voting rights, racial justice, and transgender equality.

“What makes this team remarkable is they don’t just win games; they change lives,” Mr Biden said on Monday. “That’s what winners do. They shine the light. They lift people up. They’re a force for change. That’s the Seattle Storm. That’s the WNBA. That’s what they do.”

The team in turn gifted the president a custom Storm kit with his name on the back.

Before the visit Ms Bird said that now that Donald Trump is no longer in office, it’s once again an “honour” for athletes to visit the White House to celebrate their victories.

“I think for a very long time, up until 2016, going to the White House was an honour. It wasn’t necessarily political. It was to meet the president of the United States. The person who holds that office acknowledging your team’s success,” Bird said.

Donald Trump regularly clashed with athletes during his time in office, especially athletes of colour who knelt during the national anthem to protest systemic racism, once saying he wished NFL owners would tell their coaches, “Get that son of a b**** off the field.”

He said that she “represents the best of what America stands for.”

The remarks by Mr Biden come in the wake of allegations by Hope Solo, a former US women’s national team soccer star, that Ms Rapinoe “almost bullied” her soccer teammates into kneeling during the national anthem.

“They define integrity and character and as president, as an American, I am proud of how they have represented us and they represent the best of what America stands for,” Mr Biden said of the power couple.

“If our soccer team, headed by a radical group of Leftist Maniacs, wasn’t woke, they would have won the Gold Medal instead of the Bronze,” Mr Trump said in a statement sent to reporters during the Tokyo Olympics .

“Woke means you lose, everything that is woke goes bad, and our soccer team certainly has. There were, however, a few Patriots standing. Unfortunately, they need more than that respecting our Country and National Anthem.

“They should replace the wokesters with Patriots and start winning again. The woman with the purple hair played terribly and spends too much time thinking about Radical Left politics and not doing her job!” he said.