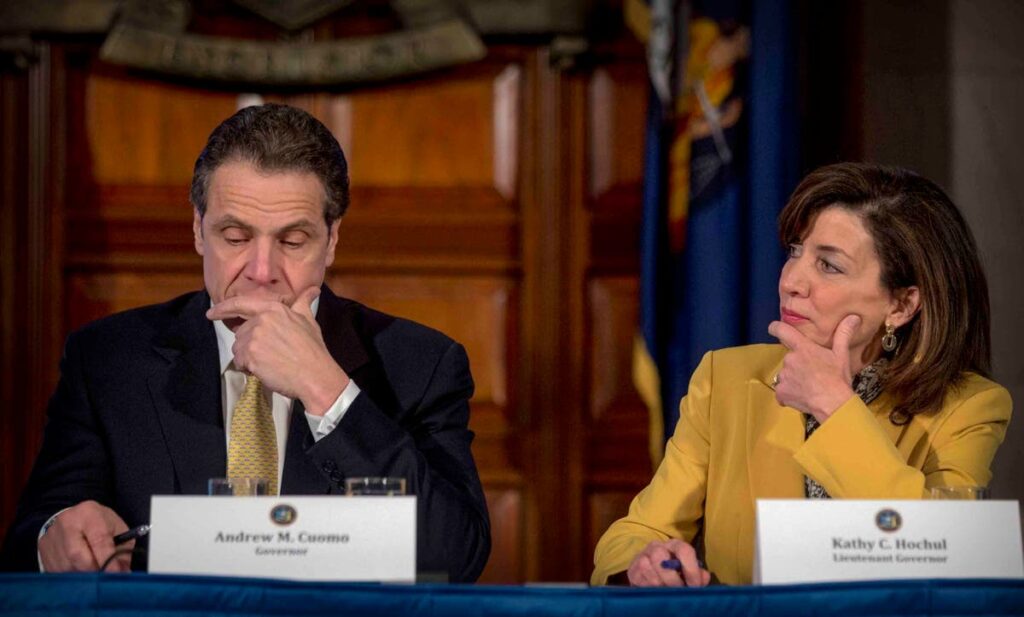 Following Andrew Cuomo’s resignation from the governor’s office, Kathy Hochul will become the first woman to govern the state of New York.

Ms Hochul, the state’s current lieutenant governor, will ascend to an interim role on 24 August. She will serve the remainder of his term, which ends next year, following mounting allegations of Mr Cuomo’s sexual abuse and the beginnings of a weeks-long impeachment probe to oust him from office.

“I agree with Governor Cuomo’s decision to step down. It is the right thing to do and in the best interest of New Yorkers,” she announced on 10 August. “As someone who has served at all levels of government and is next in the line of succession, I am prepared to lead as New York State’s 57th Governor.”

Though she has rarely appeared in public alongside him, Ms Hochul served as a key running-mate to Mr Cuomo, relying on her deep ties to Buffalo and solid ground in western New York.

Sailing from her high-profile upset in 2011 that flipped a Republican-held congressional district to elect a Democrat for the first time, she was defeated in 2012 by Chris Collins, who later left office in disgrace.

Before Mr Cuomo’s election in 2014 and re-election in 2018, her brief term in Congress representing the state’s 26th District included service on the House Armed Services and Homeland Security committees.

The Buffalo native, whose political compass steered towards the center as a moderate Democrat, previously served on the Hamburg Town Board in Erie County from 1994 through 2007, when she was appointed to Erie County Clerk by then-governor Elliot Spitzer.

As lieutenant governor, she was instrumental in the state’s “Enough is Enough” campaign to combat sexual assault on college campuses, and her website hails her as a “voice for all women”.

Following a growing number of sexual harassment allegations against Mr Cuomo, who was facing intense scrutiny over Covid-19-related deaths in the state’s nursing homes and his book chronicling the state’s response to the public health crisis that killed more than 50,000 New Yorkers, aides for Ms Hochul reportedly prepared her for his resignation and outlined a potential first month in office, according to The New York Times.

In the immediate wake of the state attorney general report alleging that Mr Cuomo harassed 11 women, including members of his staff, Ms Hochul said that “no one is above the law”.

“Sexual harassment is unacceptable in any workplace, and certainly not in public service,” she said. “The attorney general’s investigation has documented repulsive and unlawful behavior by the governor towards multiple women. I believe these brave women and admire their courage coming forward.”

“We must continue to build on the progress already made and improve the lives of New Yorkers in every corner of the state,” she said in a statement. “I know our state is in good hands with Lieutenant Governor Hochul at the helm, and I look forward to continuing to work with her.”