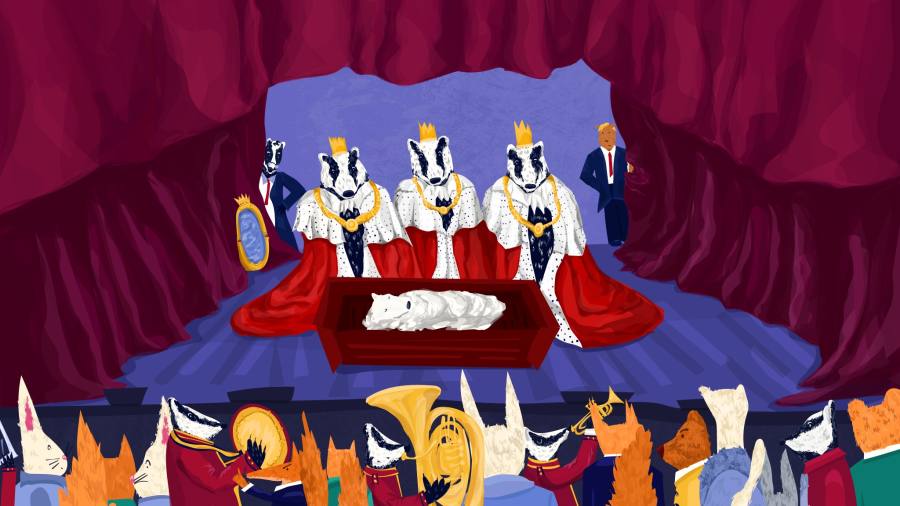 I am thankful to have survived the new year. My relief is animal, not viral. The badgers in my Cotswold garden have taken to using it for their annual New Year party. Last year they celebrated Broxit with their panto Spinderella. Many of you have contacted me about this year’s sequel. Here it is: I approached it in trepidation.

In July, a police report refocused attention on that Derbyshire lodger who murdered his landlord, an old age pensioner, cut up his body and, in the words of the judge who sentenced him, was “feeding him to the badgers”. He had shoved some of the body parts down the entrance to a nearby badger sett.

For years, I too have had a lodger and it was a relief when he volunteered in November to end his tenancy, as I had forgotten to update our agreement in the past 15 years. He showed no wish to saw me up. I find I have been paying his electricity bill, which no doubt told in my favour.

Would the badgers’ next target be me? Just before Christmas I was contacted by an out-of-work ferret who called herself Allegra. She pitched her skill at cheese-and-wine parties and, as she had communications on her CV, she offered to steer me through the new year, when badgers communicate in a festive way.

She flicked through the press cuttings and skilfully concluded that the press and the judge had misrepresented events. The body parts had been stuffed down a sett but there was no evidence that the badgers had actually eaten them.

Two nights later, I received an invitation, scribbled on a page of a pre-Christmas FT. “BADGER PANTO. 11pm, New Yrs Eve. Vicarage Copse. SLOW WHITE. Masks are for Wimps”. The L in “SLOW” had been scratched out and N had been written above it.

Allegra knew how to fit an intercept kit in my garden, so on New Year’s Eve we watched the show on a screen unrolled in the safety of my bedroom. Four-legged visitors gathered on the lawn while a badger band played “I Feel Stripy”, adapted from West Side Story.

At the entrance to the copse a cock pheasant called Han was giving a routine touch and trace to any rabbit who queued under his spotlight. Once inside, the audience waited while the big screen played footage of Oprah Winfrey entering the Duchess of Sussex’s chicken run, as seen last spring on American TV.

When the Duchess described her “rescue animals”, the badgers cheered, but foxes checked their mobiles for last-minute flights to Los Angeles, scenting a chicken dinner that would make a bucketful of hot wings from Colonel Sanders seem ever so 1972.

On stage, a senior badger read out extracts from Defra’s 2021 Report to Natural England. Ever more counties, it says, were added to 2021’s cull. The RBCT (Randomised Badger Control Trial) sets a minimum of 70 per cent of the population in an area to be shot, aiming for 3.18 dead badgers per square kilometre. Target figures for Oxfordshire, Area 49, ranged from 833 to 1,412. Like Tory backbenchers, the listeners growled at the pseudo-statistical count.

The curtains then went up on SL/NOW WHITE. Three badgers, in ducal robes, were gathered around a cradle, inside which lay Snow White, an albino badger born on the midnight clear. In June, Oxford’s newspapers had heralded a very rare badger in a nearby village, white all over with not a hint of colour on her skin.

Here she was, Snow White on cue, but the stately badgers seemed decidedly uneasy about her colour, so they bundled her off to Bridgnorth on a far from high-speed ticket. She was to join the voters of North Shropshire, a newly added area to the 2021 cull (target kill: 490 to 664, which ought, then, to include her).

Snow White needs a wicked stepmother, but wicked stepmothers have become hard to find in the headlines. Badgers are firmly behind the Duchess of Cornwall, so they cast a wicked stepfather instead, Owen Pater-snout, based on the former MP for North Shropshire, who had defended, as environment secretary, the failure of his badger cull in 2013 by explaining that the badgers “moved the goalposts”. In his bedroom he was played looking into a mirror and asking it “Mirror, mirror on the wall, who’ll be the richest of them all?”

Dispatched to a failed Shropshire sett, Snow White found her school grades plummeting. The maths was beyond her and nobody offered to level her up. When her teachers renamed her Slow White, all she had left was that lifeline, her BadgerPad. Scriptwriting badgers pore over the FT.

In November, emails between the departing head of Barclays Bank and the disgraced Jeffrey Epstein made headlines, referring at times to “Snow White” in circumstances as yet unexplained. Snow White scrolled through them and assumed, wrongly, they must be a call for her. Act 1 ended with her journeying south, stowed on a Network train to Euston.

After a long interval symbolising three days, Act 2 began among a shower of snowflakes: Snow White was standing by the Bank of England, having learnt that her rescue banker had abruptly left his job. However, a bell sounded and on to the stage came the Peppa Pig Bus, driven by Miss Rabbit, who offered Snow White a lift to Downing Street, Number 10.

I may be the only person who admires Boris Johnson for mentioning that triumph of British business, Peppa Pig, to an audience as stodgy as the CBI. Snow White would soon agree.

Inside Number 10, the cast of Peppa Pig was curiously depleted. Grandpa Pig had kept safe in his garden but Rebecca Rabbit had been too stupid to self-isolate and Didier the Donkey had been deported because his visa had expired after 180 days. At least there were still seven dwarfs, including Priti, Rishi, Kwasi, Ollie and one who seriously called herself The Truss.

Downing Street does not officially do parties but on every floor there were merry sounds of gatherings. Snow White was given a quiz to answer and told to wait for Dr Bozzie Bear himself.

Late, as often, Bozzie appeared, just like his namesake, Boris Johnson, with Princess Nut Nuts beside him, cradling yet another baby squirrel. Looking harassed, he announced that the wicked stepfather had had to be culled, news that made the cast hail Snow White as “safest of them all”. To a rousing chorus of “Build Back Badger”, she was escorted upstairs to meet her Prince Charming, said to be a spectacled Slithy Tove.

First, the quiz needed answers, and Bozzie stood forward as if to give them. However, the lights went out and the panto stopped short. Roars of approval went up from the audience, and even Allegra had to hand it to the scripting. For once, the guests left peacefully, though yesterday we found 30 notes in the flowerbeds, addressed to “The Chair, 1922”. Badgers may still be for Boris but there are weasels out there who are wanting to cull him too.