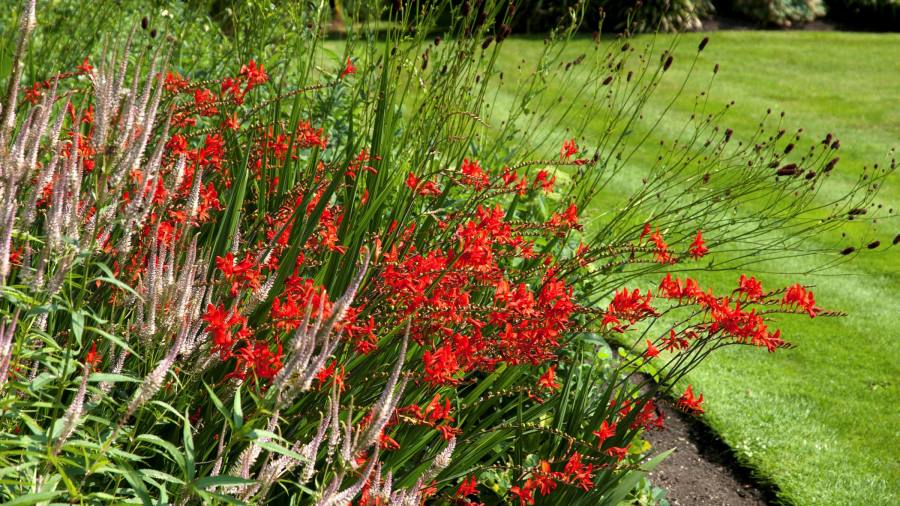 I am so glad not to have rewilded my garden’s main front lawn. The “re-” bit of the wilding would be dodgy: was it ever “wild” before with all the weeds and ground elder that would now appear if I let it go? There is so much doublethink on this topic.

On the one hand, more than a million new converts have joined gardening, the pleasure of a new lifetime, since the first lockdown. On the other, a persistent buzz all year has been that non-gardening is the way forward, leaving lawns to become long with weeds and flower beds to fill up with “native” wild flowers.

Maybe some people will prefer the look of it in May, but right now they would prefer my own August garden, full of colour, butterflies, bees (but see below), and plenty of flowers from the wild, not just from the British flora, which is not nearly as lovely as Japan’s.

I am fearing that this year’s Chelsea Flower Show from September 21 onwards will give plenty of space to native wild-flower gardens: I do not go to a big flower show to see little bits of quickthorn hedge, clipped and crammed in for PR. This month I enjoy it, full sized, on walks in nearby fields.

In August I also enjoy the banks beside roads and motorways. Often they have not been cut all year and, as a result, are full of the brown seed heads of waving grasses, the last of the year’s meadowsweet, yarrow and so forth. Seen at speed, they look their best.

What is fine as a passing view at 60mph is much duller at pedestrian pace, let alone as the only view all day in a garden. When I go home I want to look across well-mown green grass and enjoy a profusion of phloxes, the first pale blue daisies, smouldering red crocosmias, dark violet gladioli and so much else. I want an approximation to paradise. I do not want more of the motorway look, immobilised at home.

If you live and walk only in a city, I realise that those verges may not be in your daily sightline. Perhaps that is why various city councils are playing games this summer with features that have a “meadow” theme. In my regular base, Oxford, the city council has turned the space in front of the prime minister’s old college, Balliol, into a version of a “meadow”, with space to sit out on some transplanted turf.

The meadow is planted in slatted wooden boxes above the usual asphalt of the street. When it first appeared, the only real items of interest in it were those lovely non-meadow flowers, non-British sweet williams. They have faded and the rest of the meadow planting in the boxes looks a mess. I do not think it is a political statement, intended to echo the disorganised chaos that, according to insiders, characterises the decision-making of the prime minister, educated across the street.

Transplanted trees are hanging on in some of the boxes, while in others, thinly cut strips of transplanted turf have been looking patchy. I know they are not sentient beings, but this summer, I feel sorry for rolls of turf. At Marble Arch in London, long runs of them have been slapped down the sides of that idiotic Mound, a £2m project.

In my Oxford college I look after a historic Mound, also man-made but properly built between 1592 and 1649: it was intended to evoke Mount Parnassus, not to promote a summer’s shopping. I would not roll out pre-grown turf on to its dry sides to evoke a rural fantasy. It would die, as it began to do in the first heat at Marble Arch.

The trees in Oxford’s and London’s “green” installations will, I assume, be dumped after their brief season in public. I resent these quick-fix designer projects which are only “sustainable” with concerted watering in the secrecy of the small hours. They are the very opposite of the wild and natural fantasy on which they trade.

Protest, please, at these outbreaks of public waste and hypocrisy. Meanwhile, new and old gardeners, please do not clip gardening’s lovely wingspan. Vegetable gardening has enjoyed a surge of new recruits, who are, I trust, more realistic. Nobody has yet filled a city space with a show of “native” vegetables, wild carrot, not long-rooted carrots, and vetch, not French beans. Samphire and sea kale have a place, but wilding will not get a cook very far.

I am enjoying Lex editor Jonathan Guthrie’s column in House & Home, but I disagree with him on the merits of using ladybirds as predators of aphids. I wish him the best of spotted luck when his broad beans are beset overnight with blackfly and are at risk of ruin, when his gooseberry bushes are suddenly ravaged by sawflies and his carrots wrecked by carrot fly (little bushes of summer savory are not a reliable protection).

An industrial quantity of slow-acting ladybirds, not just a few matchboxes of them, would be needed to rid even my few rows of beans of these pests, which proliferate by virgin birth.

Instead, one careful spray with, say, approved Provanto Bug Killer will see the horde off in an hour. When our homegrown crops fail, we all slink off and buy replacements in supermarkets. They will have come from sprayed bushes. Even certified organic growers are allowed, in a crisis, to use approved chemical weapons. Wilding and caterpillar-free cabbages do not go together.

My non-wilded garden is full of butterflies and bees. It is completely untrue that they have to have “nectar” from native plants. I keep some discreet ivy and a few nettles by the rubbish heap in order to encourage native British butterflies to breed. If their larvae survive British ants, they hatch and career off with all the summer’s immigrant butterflies to feed on my lovely flowering shrubs from Asia.

I have just checked. Bees are flocking, as usual, to my annual cosmos, the very opposite of a British native. They are loving the orange flowers on that excellent eastern lily, Lilium henryi. They choose my semi-double dahlias, hybridised since arriving from Mexico. Global gardens are extremely friendly to pollinators.

On the House & Home stage, Robin Lane Fox will be discussing whether gardens can be both beautiful and biodiverse with Richard Barley from Kew Gardens. To book tickets, visit here

On Oxford’s street meadow I watched the first afternoon’s clientele risking a cup of possibly fair-trade coffee while bare-legged on the bumpy turf rolls. Two bees buzzed out, dissatisfied, from the meadow mess, whereupon the coffee drinkers swatted around, ill advisedly, and headed back to a chair on safe asphalt.

Like meadows, gardens are unnatural. Of course a stretch of wild flowers can be lovely at the further edges of a gardened garden, but in a small garden’s space one has to choose. I choose to apply the skills of gardening, honed in Britain for centuries, a chain I am proud to uphold.

In this wonderfully damp August I have even come up with a mission statement for my garden: “Beauty and flavour; compatible diversity; seasonality and a global haven.” I will say more about it another week but I wish to be clear: compatible diversity does not include badgers.