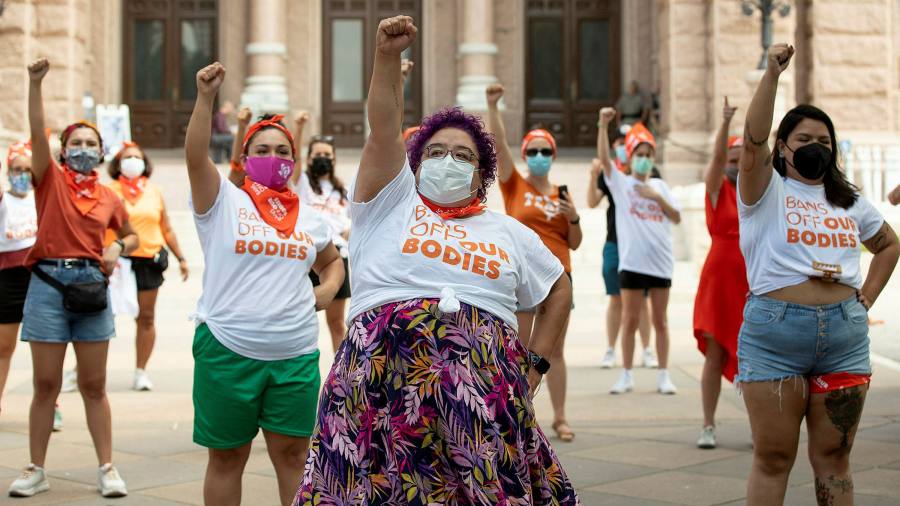 Sign up to myFT Daily Digest to be the first to know about US society news.

The US Supreme Court has poured petrol on America’s already fiery culture wars. Last week, five justices refused to block a Texas statute that bans abortion after just six weeks, a time when most women are just figuring out that they are pregnant.

This noxious law is not only one of the nation’s strictest, but also promotes vigilantism on a subject that already brings out the worst in Americans. It allows private individuals to sue anyone who performs an abortion or “aids and abets” one. That could be the Lyft driver who takes a patient to a clinic, a parent who pays for an abortion, as well as the doctors and clinic staff.

The conservative justices did not rule on the law’s constitutionality. Rather, they found that the abortion providers who challenged it had not made the case for an emergency stay in light of the “novel and complex” legal questions it presents.

Nonetheless, the decision is a dramatic escalation of the campaign to undo Roe vs Wade, the 1973 decision that legalised abortion nationwide. Liberal Justice Sonia Sotomayor called it a “stunning” failure to block a “flagrantly unconstitutional law”.

The ruling’s radical nature is underscored by the fact that Chief Justice John Roberts, a conservative, joined the three liberals in dissent. There was no hearing and no lower court opinion. The justices are using this kind of quick ruling on the “shadow docket” far too often to deal with topics that ought to be considered thoughtfully.

President Joe Biden has rightly condemned the statute and promised to protect the right to an abortion, which remains the law of the land. The federal government must step in, not least if Texas’s army of citizen bounty hunters tries to interfere with interstate commerce and prevent women from travelling to out-of-state clinics.

The stakes go well beyond one statute. Fifteen states have passed laws that ban abortion entirely or between six and 12 weeks of pregnancy, in apparent conflict with the standards set down in Roe.

For decades now, rightwing legislators have proposed ever tighter restrictions on the procedure. But the vast majority have been blocked by the courts from taking effect. Even justices who were personally anti-abortion have maintained the status quo because they were concerned about legal precedent and the Supreme Court’s legitimacy.

But Donald Trump’s appointment of three conservatives has changed the balance of power and that era of moderation appears to have come to an end. The true impact could become clear when the court hears a challenge to a Mississippi abortion ban in the term that starts next month.

When that case comes up, the justices should keep in mind that the Supreme Court’s survival ultimately rests on public acceptance. On abortion, opinion is shifting against the rightwing: 54 per cent of Americans now believe abortion should be legal all or most of the time, while 42 per cent believe it should be mainly illegal. In 2003, the ratio was nearly the opposite.

If the court charges ahead with reversing Roe, that would not make abortion illegal. Rather, it would hand control back to the states, sparking decades of debate that will widen divisions. Such an outcome would also inflame liberal Americans. However, their threats to end the Senate filibuster to make it easier to pass federal abortion rights laws or expand the size of the Supreme Court to dilute the conservative majority are also misguided.

Both sides should want to avoid a battle that would shake America to its constitutional foundations.