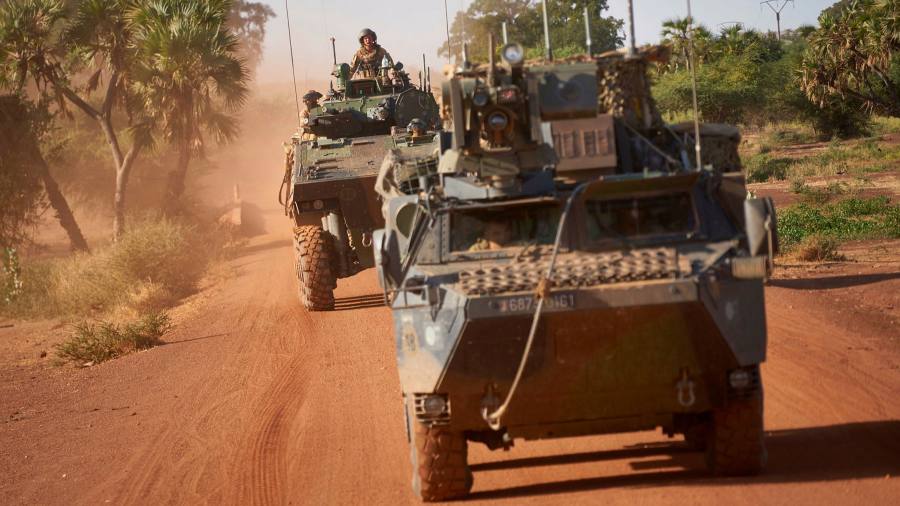 Sign up to myFT Daily Digest to be the first to know about Africa news.

Just as Kabul was about to fall this month, Iyad ag Ghaly, the grizzled Malian leader of al-Qaeda affiliate Jamaat Nusrat al-Islam wal-Muslimin, took to the airwaves. Congratulating the Taliban on the imminent expulsion of foreign infidels, he foresaw victory too in the Sahel, a vast stretch of semi-arid land that fringes the Sahara desert.

Here, a mishmash of armed groups loosely affiliated with al-Qaeda and Islamic State have carried out increasingly frequent and deadly attacks on military and civilian targets in an expanding arc from Mali to Burkina Faso and Niger. Other Islamist groups, including Boko Haram and Islamic State in West Africa Province, are active in Nigeria and Chad.

Ag Ghaly, who in 2012 helped impose sharia law in the ancient city of Timbuktu after militants took over a France-sized slab of northern Mali, celebrated President Emmanuel Macron’s decision this July to halve its troop presence in the region. “We are winning,” he said.

Thankfully, France’s drawdown is not yet a US-style surrender. Its version of mission creep began in 2013 when France’s Operation Serval was instrumental in ending Islamist control of northern Mali. Paris’s changing strategy stems from a sensible verdict that the current one is not working.

Far from diminishing, the Islamist threat across Africa is growing. This year alone, more than 700 civilians have been killed by al-Qaeda and Isis affiliates in the Sahel. In Somalia, al-Qaeda affiliated al-Shabaab has been responsible for mass bloodshed for 20 years. Islamist militants in northern Mozambique have since 2017 killed 2,600 people, displaced 700,000 and brought Total’s $20bn gas project to a shuddering halt.

There are no glib lessons from Afghanistan. But there are pointers.

The first is the danger of over-reach. President Joe Biden has disavowed nation building. If that proved impossible in Afghanistan, how much harder in the Sahel, where it would entail building a legitimate state not in one country, but in at least five. The closest France came to trying was in Mali. It failed. The thinly democratic government proved a flaky ally and a poor servant of the Malian people. Last August, it was ousted in a military coup.

France is probably right to scale back its Mali operations. Heavy-handed French presence can be a red rag to a bull. In Mali and elsewhere, militant groups use anti-French sentiment to recruit new fighters.

But changing tack is not the same as retreat. One lesson of Afghanistan is that a relatively small presence can be effective. In the past two years of America’s Afghan occupation, a few thousand US troops, providing air cover and intelligence to Afghan forces, was enough to hold the Taliban at bay.

“There is no question of withdrawal,” a senior French official told the FT. “All our intelligence points to Africa as the continent where al-Qaeda wants to expand. They have bet on the Sahel.”

Instead, Paris is leaving around 2,500-3,000 troops in the region and encouraging other European nations, including Germany, Italy and the UK, to take up the slack. The emphasis will shift from direct combat to training and logistics.

Mohamed Bazoum, president of relatively stable Niger, which has emerged as the regional ally of choice, said in a recent interview he did not oppose France’s troop reduction. What Niger and others needed, he said, was air cover and intelligence. There may be a middle ground between occupation and surrender.

The most important lesson from Afghanistan is the hardest. This is that the basis of security is a legitimate state. Militants occupy the cracks — or wide-open fissures — left by government neglect. Soldiers won’t fight for a state that does not serve its people. Peter Pham, a former US special envoy to the Sahel, reckons the “fundamental driver of the conflict in the Sahel is a crisis of state legitimacy”.

The bad news is that a functioning government cannot be imposed from outside. The good news is that it doesn’t need to be a paragon of western democracy. Any government that provides basic services to all, regardless of religion or ethnicity or whether they live in the countryside or the cities, stands a fighting chance. If, however, there is a hole where the state should be, militants will rush in to fill it.