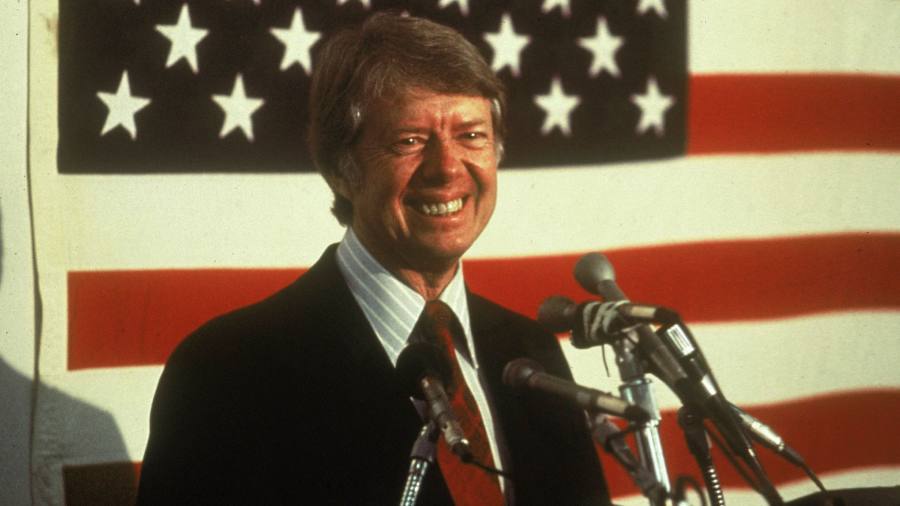 You do not need to be over 50 to see today’s parallels with the US of the 1970s. That decade offers an instantly recognisable meme of rising inflation, political drift, spiralling crime and ominous geopolitics. Nor do you need to equate Joe Biden with the hapless Jimmy Carter, whose presidency deserves higher marks than history has given it. There is no Ronald Reagan on the sidelines. After Biden comes the deluge of a resurgent Donald Trump, or a kindred figure. Biden’s goal must be to avoid a Cartesian fate.

Events — and atmospherics — are making that increasingly hard to do. Like Carter, Biden is discovering how little scope the White House has to influence US homicide rates, consumer price inflation or Russia’s military ambitions. As with Carter, he is being blamed anyway. The murder rate took its biggest leap in 2020 before Biden took office, though it continued to increase last year. Rising annual inflation, which hit 7 per cent in December — the highest since 1982 — is largely a function of the pandemic, though Biden might be re-evaluating the wisdom of last March’s $1.9tn stimulus.

Russian president Vladimir Putin has not done anything on the scale of the 1979 Soviet invasion of Afghanistan. But the massing of troops on Ukraine’s border poses as big a potential challenge to Biden’s global standing as an aggressive USSR was to Carter’s. In reality, Carter was far more robust than his reputation implied. His appointment of Paul Volcker to chair the US Federal Reserve and backing for Afghanistan’s mujahideen are both steps associated with Reagan. In some respects Reagan’s actions, as opposed to his words, were less decisive than Carter’s. But America’s public thought otherwise. Biden should take note. Vague impressions — of drift and waning energy — are hard to shift once they have formed. Politics offers scant room for reappraisal.

The question is whether voters think Biden is in charge. In practice he has less power than responsibility. A key to public confidence is the impression of being in control. Carter infamously flunked that test in 1979 with his “malaise” address, in which he mused about the country’s crisis of confidence — “a fundamental threat to American democracy”. It was ostensibly about US energy security at a time of galloping oil prices. What voters heard was a leader bemoaning America’s spiritual decline. He did not use the word “crime”. Inflation was mentioned only in passing.

Compared with what Biden faces, Carter’s domestic challenges seem almost enviable. Unlike Carter, who had big majorities in both chambers of Congress, Biden has little ability to pass legislation. Prospects for his “Build Back Better” bill, and the two democracy reform bills that he is prioritising, are dim. He should get high marks for good intentions. But declaring something an existential priority is a pistol you can fire only once. If it turns out to be loaded with blanks the electorate will notice. Carter’s malaise speech was remembered for its insolubles; no president can fix a spiritual crisis. Biden has at least set himself a goal he can theoretically achieve. But can he convince the nation?

Though no one knew it then, the 1970s was a transitional decade between the age of Franklin Roosevelt’s 1930s New Deal and the 1980s shift to free-market ideology under Reagan. Subscribing to neither but with traces of both, Carter has been orphaned by history. The early 2020s have a similar transitional feel. The age of 1980s “neoliberalism” is over. It is unclear what will replace it. One possibility is an American version of fascism — something that really could happen here. It would be nativist and ruthless in its means of retaining power. Trump has given America a dress rehearsal. Biden’s declared rationale is to prevent that from happening.

Another is the continued ossification of US institutions. That, too, is redolent of the 1970s — the Soviet version, not the American. Moscow under Leonid Brezhnev was a gerontocracy. As Zbigniew Brzezinski, Carter’s national security adviser put it, the USSR reversed the laws of natural selection: evolution was penalised. The age of America’s leaders is not encouraging. Trump is 75. Biden is 79, as is Mitch McConnell, the Republican Senate leader. Nancy Pelosi, the House speaker, is 81. It is hardly reassuring to note that they launched their careers in the 1970s. Most of those waiting in Washington’s wings are not much younger.