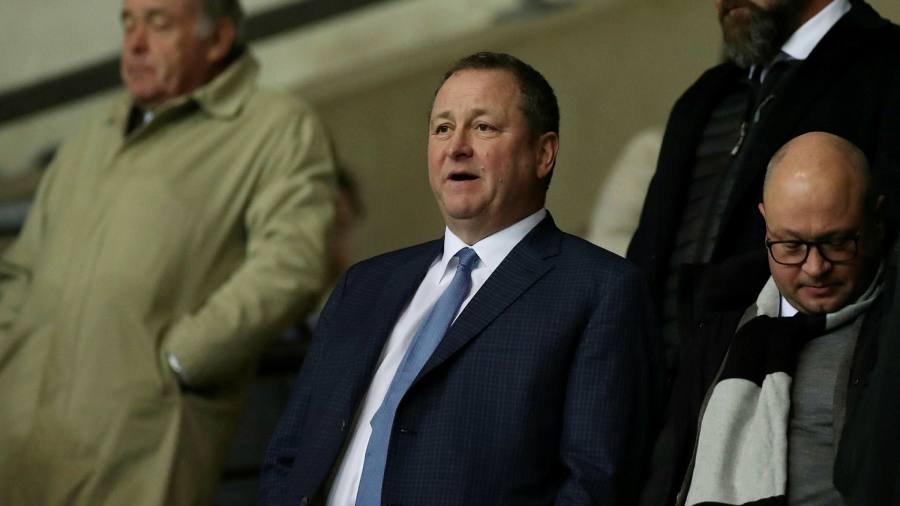 Sign up to myFT Daily Digest to be the first to know about Frasers Group news.

One of Mike Ashley’s favourite tricks when building his retail empire was the bogus closing down sale. “Everything must go” signs went up long before minor refurbishments or switching of fascia, only for trading to continue as normal soon after.

Sports Direct ended the practice in 2008 after a rebuke from the Office of Fair Trading. It nonetheless finds a parallel in the news that Ashley plans to vacate the post of chief executive at its parent company, Frasers: it’s a protracted, heavily publicised finale with an expectation that by the end nothing much will have changed.

Hopes of a fresh approach were undermined immediately by Ashley’s choice of successor: his eldest daughter’s fiancé, the 31-year-old Michael Murray. Whatever Ashley’s new business card might say, it’s Murray’s likely appointment that suggests a continued corralling of control.

Murray was already a lightning rod for criticism of Frasers’ corporate governance. The former nightclub promoter has since 2016 been brokering freehold purchases on a consultancy agreement worth in the ballpark of £5m a year, albeit not claimed in full. In 2018 he took on responsibilities previously given to long-serving Ashley lieutenants Dave Forsey, who quit as CEO in 2016, and head of retail Karen Byers, who exited in 2019.

Though not yet on the Frasers’ payroll, Murray and his family have business interests that intertwine with Ashley’s. The last set of accounts revealed store refit work to a value approaching £100,000 had been won by a Chelsea design consultancy owned by Murray’s mother.

The City has become inured to such corporate governance red flags, having long accepted that Frasers is made in the image of its brash, impulsive founder. Ashley’s majority shareholding and preference for compliant underlings have been the licence to disregard conventions of public ownership. Lurid tales of his drinking and gambling serve as forewarning to any prospective investor that Frasers is not a normal company.

Might that change? It was Forsey’s exit that forced Ashley to give up the nebulous title of executive deputy chair, which he had used since floating the company in 2007. Contact with media and analysts before then had been rationed: Ashley fully exploited his image as a maverick who had more important things to worry about.

Moving to CEO left no human shield when Ashley faced criticism of pay and working practices at Sports Direct’s Shirebrook warehouse in Derbyshire, which resulted in two enduring images of his tenure: a Select Committee appearance where he answered questions in the manner of a schoolboy caught skiving; and a media tour of Shirebrook where he volunteered for a security check and pulled wads of crumpled £50 notes from his pockets.

Ashley’s gaffe-prone awkwardness is what sets him apart from founders who continue to steer their companies from the back seat, such as Tim Martin at JD Wetherspoon and Philip Meeson of Jet2. It might be that he just wants a stooge up front to take the flak while he continues to make the big decisions. But succession planning might also indicate an acceptance that Frasers is moving ever further away from its bargain-bin strategy that served him so well over the past three decades.

It was Murray who led Thursday’s post-results investor presentation. He talked almost exclusively about luxury retail. Promises of winning the trust of Gucci and Prada replaced the usual grumbles about Nike and Adidas. Frasers wants to grow sales from upscale stores including its Flannels chain from £750m to £2bn by 2026; a hugely ambitious target requiring charm and tact. These are not Ashley’s strengths.

Frasers remains a long way from becoming a normal company. Ashley’s eccentricity affects all areas, from its speculation on the shares of rivals to a remuneration policy that last gave executive directors a pay rise in 2002. There are no quick fixes for a corporate governance quagmire. Nevertheless, focusing on the founder exclusively risks ignoring the possibility that Frasers will no longer be built in his image.