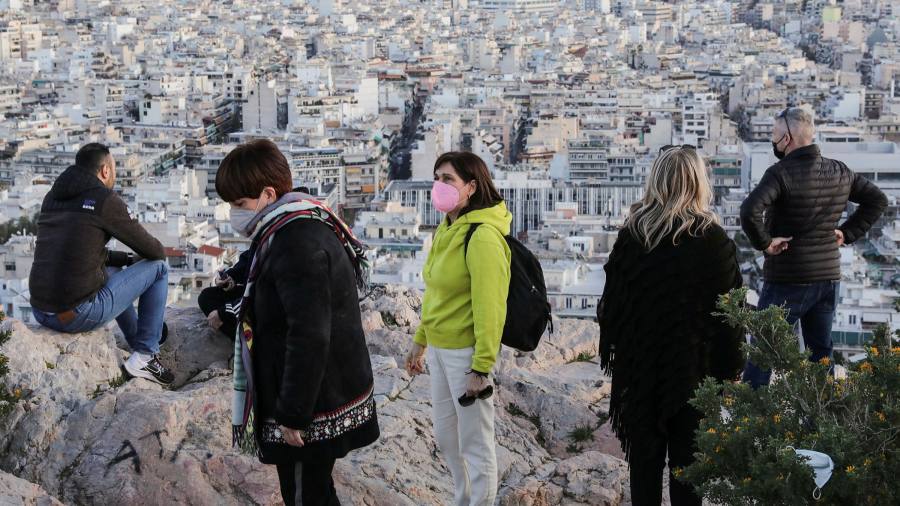 When I visited Athens over the holidays in 2020, I felt as if I were in a dictatorship, with strict evening curfews and mandatory text messages to be sent to a government agency before I could venture outdoors. In the hours after the curfew descended, it was so quiet it seemed as if the streets were laid with straw.

This time, we were allowed to move freely, as long as we were able to show proof of vaccination and ID before entering indoor spaces such as restaurants and bars. In England, there have never been Covid curfews, nor do you have to explain to the authorities why you’re leaving your house, for which I am thankful. Taking the Tube every day, I often sat next to people without masks. But in Athens a friend was fined €300 for walking in Syntagma Square without one.

Every time I drove to the city centre, there were anti-vaxxers protesting against Bill Gates, against big capitalism, against the supposed master plan to eliminate a large portion of the human race through a fake pandemic, ostensibly the greatest cover-up in recorded history. It reminded me of a sign I once saw outside a Baptist church in Alabama — “Whoever is praying for rain, please stop”.

The anti-vaxxers are mockingly known in Greece as the “sprayed”, as they often belong to conspiracy theory groups claiming that government forces are spraying us from a high altitude in order to impair our cognitive faculties. As a result, we do not challenge authority and inject ourselves with dubious vaccines.

Although the Orthodox church supports vaccination, a large number of priests, mostly in northern Greece, have opposed the jab, and many of their parishioners have died. According to the latest figures, the rate of full vaccination in Greece is 66 per cent; the government ban on unvaccinated people entering indoor public spaces, announced in November, seems to have had little effect. Omicron is spiking, with coronavirus cases running at some 35,000 a day.

In mid-December the death of Giorgos Tragas, an unvaccinated celebrity commentator and head of the political movement Free People, caused a sensation. The Greek journalist, who died of complications of Covid-19, was a firebrand of the anti-vaccination movement. Damning on government mandates and lockdown measures, Tragas’s polemic against regulations had made him an influential, albeit controversial voice.

The populist movement in Greece has its roots in a macho culture that validates virility and male identity by rejecting authority. In other words, if you do exactly as you’re told, you’re a doormat. According to an old Greek saying, a woman should never touch a lighter, a doorknob or a bottle; a man ought to light her cigarettes, open doors and pour the wine.

The world is divided into facts and non-facts. Until a few centuries ago, people believed that tides existed just to help the ships come in, that spirits could tap into electric currents. It turns out that progress comes in a zigzag, not in a straight line.

My favourite story on empirical evidence is about an early meeting of the Royal Society in London, allegedly attended by the king, regarding a bowl of water that scientists at the time assumed weighed the same with a goldfish in it as it did without. When a balance was brought, the experiment was carried out. The bowl was put on the balance, then the fish was added. Unsurprisingly, the bowl’s weight increased by exactly the weight of the fish.

You can’t just walk into a restaurant any more, I reflected, as I fumbled with my NHS app to get inside a famous fish place. I couldn’t help thinking of Yuval Noah Harari’s grim predictions about data coming to rule all aspects of our lives.

My friend’s daughter showed me an invite for a ‘Positive Vibes’ party, which you could attend only with a positive PCR test

But there are still traditions in Greece untouched by the technological revolution. I know people who turn their empty coffee cups upside down on a saucer to have their future read by an aunt (the coffee dregs leave imprints and shapes that are interpreted); and friends of mine will sometimes pay €50 to go to a fortune teller in a shabby part of town to find out whether they will get a promotion at work or what will happen with the men they desire.

And on January 1, a cake dedicated to St Basil is cut and divided among all members of each family to see who will win the lucky charm, usually a €2 coin (10 drachma before 2001) wrapped in tin foil and placed in a slit at the bottom of the cake so it’s not visible. Whoever finds it in their piece is the signified recipient of good luck for the year ahead.

On New Year’s Eve, I had dinner with friends at one of the oldest Athenian restaurants, where I once had my wedding party. There were six of us at a round table, the maximum number allowed by government regulations. My friend complained that her nostrils were sore from excessive testing. Her 22-year-old daughter was ready to go to an illegal gathering.

Before leaving, she took out her phone to show me an invite for an irreverent party called “Positive Vibes”, which you could attend only with a positive PCR test taken within the last 24 hours. The location was undisclosed and there was a complex process to go through to find out the address, as the fine for private parties starts at €50,000. Not to mention that anyone with Covid must self-isolate.

In between courses and bottles of red wine, the talk was about the trials of two women, Ghislaine Maxwell and Elizabeth Holmes. I’d just rewatched 12 Angry Men (1957), probably the best film representation of the part of the US constitution that promises defendants a fair trial and the presumption of innocence. If the world is divided into facts and non-facts, this is a film about the importance of reasonable doubt.

With dessert, an email pinged on my phone. It was a lab notification that the PCR test I had taken that morning proved I did not have Covid-19. This meant I could fly home to London. I could not check in unless I had uploaded a negative PCR test result and a passenger locator form, and I could not upload the latter unless I had a confirmation number for a pre-paid Day 2 test to be taken on arrival. The world as we knew it is gone.

“Stay negative” was the text that circulated as the new year was about to arrive. There was no music allowed in the restaurant, as part of the current measures, but everyone was toasting to the end of the pandemic, to life resuming at full speed. A few minutes after midnight, my son called to say that in his grandmother’s house the cake has just been cut and the coin was found in my slice. Apparently, this is my year.