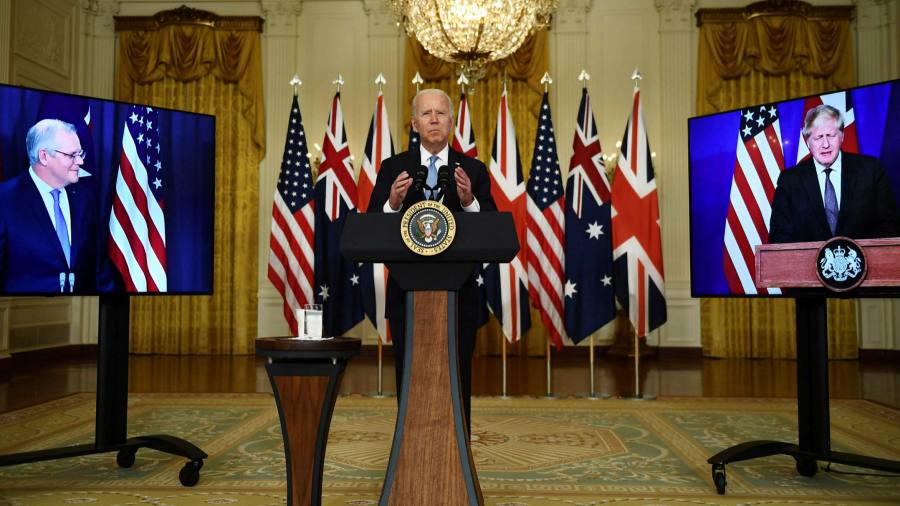 Sign up to myFT Daily Digest to be the first to know about US-China relations news.

Be careful what you wish for: the Australian prime minister, Scott Morrison, has pulled off a coup in securing a deal with the US and the UK for his country to gain nuclear-powered submarines in the face of an increasingly assertive China. This is no simple arms deal. The trio presented it as a defence pact, dubbed Aukus, which instantly drew condemnation from Beijing. All three allies stand to gain from the agreement. But the price will be further raising the temperature on already simmering tensions with China.

The timing is certainly propitious for President Joe Biden, coming after the debacle of the withdrawal from Afghanistan. It signals Biden’s commitment to regional alliances to counter China; he is due next week to host the Quad, dubbed the Asian Nato, comprising India and Japan as well as the US and Australia. After all, this is what Biden expressly considers the primary geopolitical threat to US interests. Equipping a key US ally in China’s backyard with the latest in submarine technology and long-range missiles goes some way to responding to the threat posed by Beijing’s 14 operational nuclear submarines to strategic hotspots and key trade routes in the Indo-Pacific.

For the UK, a souped-up arms deal on the other side of the world fulfils its commitment to a global post-Brexit future, and is consistent with its “pivot” to the Indo-Pacific and its current entente with Australia. Greater co-operation with the UK’s oldest allies — Biden expressly referred to the three countries’ alliances over the last century’s wars — is pleasing symbolism for the Conservative party.

But doubts persist, not least over how far the UK and Australia are willing to accept the commercial and strategic consequences of antagonising a China that views the pact as an explicit threat. The Trump administration proved how fickle US foreign policy could be; the current president may be committed to Aukus but that is no guarantee his successor will be. Meanwhile, the new submarines may not even be ready in the next decade. Biden also did the alliance no favours when he appeared to forget Morrison’s name, turning to thank “that fella’ Down Under” during the virtual press conference: less Aukus, more awkward.

More awkward still is where the pact leaves the trio’s relationship with France, with which Australia previously signed a A$50bn (US$36.6bn) deal for a fleet of conventional submarines. That deal, reaffirmed by Morrison just two months ago, will now be ripped up. Unsurprisingly, that has piqued France. It complains that the US, in seeking closer ties with one ally, has alienated another. The analysis is correct but it is a sacrifice that Biden seemingly thinks is worth making for greater security in Asia.

There are trade-offs in rebuffing France for both the US and the UK, particularly when it comes to managing the threat from Russia. The purpose of Nato, so undermined by recent events in Afghanistan, needs now to be reaffirmed. Upsetting Paris could also have direct consequences for Washington’s efforts to constrain Beijing. An EU-China investment treaty that the Biden administration dislikes has been shelved — but might yet be revived.

However, perhaps the biggest questions are for China to ponder. While it is true that the pact risks stoking Beijing’s paranoia, regional powers, from Delhi to Tokyo to Canberra, are now consistently tightening bonds with the US. That in itself should prompt some soul-searching about China’s frequently belligerent words and actions. “Wolf warrior” diplomacy from Beijing has a price.