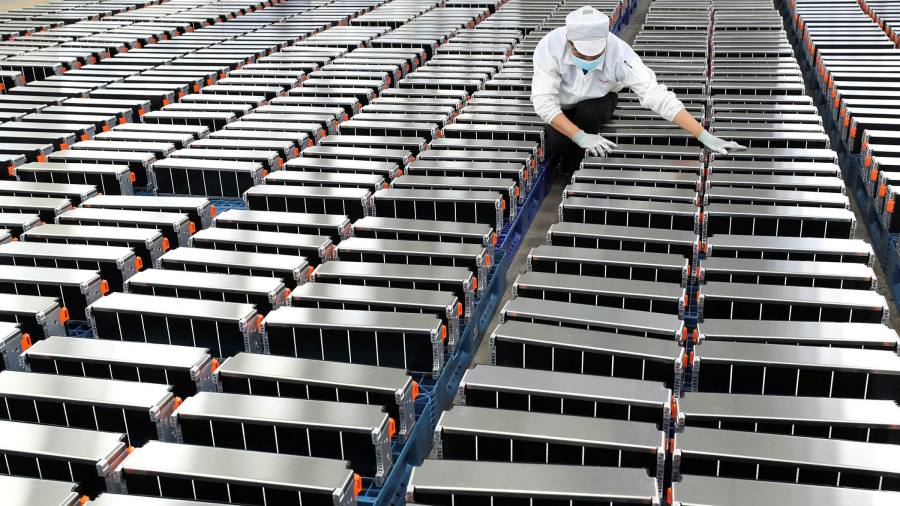 Sign up to myFT Daily Digest to be the first to know about Batteries news.

Do electric cars have a higher chance of catching fire? Probably not. But when they do, battery fires last longer, resulting in a more damaged car and delayed discovery of the root cause. Under those ashes, lies the true cost of electrification.

A string of fires and recalls has drawn fresh attention to the risks of batteries. GM has recalled 142,000 cars and Hyundai 82,000, both due to the risk that the batteries can, in unusual circumstances, burst into flames.

Unlike components of traditional petrol cars, the world’s automakers source all their electric car batteries from a handful of Asian companies. Of them, just four — LG, Samsung SDI, Panasonic and CATL — supply high-end batteries. They are all running at close to full capacity.

Replacing existing batteries therefore displaces production of new ones, raising the prospect of a shortage as carmakers seek to increase production. Recalls are also highly expensive, challenging the business models of battery producers. Increased costs may then have to be passed on to automobile makers and their customers.

Part of the increase in recalls is natural given the record number of electric cars on the roads, with global sales nearly doubling in July. Governments and automakers have set ambitious targets of going all electric. Volvo, Jaguar and Cadillac are just some of the automakers planning to give up petrol-powered cars by 2030. Beijing wants a fifth of all new cars sold to be new energy vehicles by 2025. The EU has proposed what is in effect a ban on the sale of new fossil-fuel cars from 2035.

Reaching those targets is based on two assumptions: battery makers are able to build capacity to meet that demand, while keeping prices down.

Until now, the trend has been encouraging. The prices of batteries — the most expensive component of an electric car — are falling. The price gap between electric cars and petrol peers has been narrowing, with parity just three years away, says UBS. Prices of battery cells have fallen nearly 90 per cent in the past decade to about $110 per kilowatt-hour last year, according to consultancy Benchmark Mineral Intelligence.

Yet while those have fallen, the cost of recalls involving batteries are climbing. A short circuit or defect within the battery cells can be explosive as the chemicals inside lithium-ion batteries are highly flammable. But then, so is petrol. There were about 174,000 vehicle fires in the US in 2015, according to the National Fire Protection Association, when electric cars accounted for less than 0.3 per cent of cars on the road.

The difference is the price of fixing the problem. Nearly all petrol car recalls involve faulty components, such as airbags, floor mats and ignition switches, which are inexpensive to replace. Ford Motor’s recall of 3m vehicles for airbag issues in January cost $610m, which works out to an average cost of $200 per car.

For recalls of electric cars, average costs are inevitably higher because the battery pack accounts for about 40 per cent of the total car price. The latest GM Chevy Bolt recall cost $1.8bn to an average of $12,700 per car. Hyundai’s total cost of this recall was estimated at $900m — about $11,000 per car.

That, in turn, puts a disproportionate amount of the financial burden on battery makers — which already run on razor thin margins. For LG Chem, which supplies batteries to Tesla, Porsche and BMW among others, operating margins of its electric car batteries unit are just 1.4 per cent in the second quarter. Over the past two full years, those were negative. Tesla supplier Panasonic’s counterpart booked a loss every year, but one, since production started at Tesla’s battery “Gigafactory” four years ago.

Critically, rising costs are compounding the challenge. The average price for lithium carbonate, one of the two main compounds used in batteries, has more than doubled since the start of this year, reaching $16,500 a ton in August. Increasing production capacity is costly — LG, for example, will spend $12bn to the end of 2025 to build plants needed to meet demand. Then, shipping prices from Asia to Europe, which are up 10-fold since May last year, according to the Drewry World Container Index, add to supply chain pressures and costs.

Combined, those factors have the makings of a supply crunch, drawing parallels with the months leading up to the current chip shortage. This is not only likely to see costs rise, but make it more challenging for auto companies to meet targets for ushering in the electric car revolution.